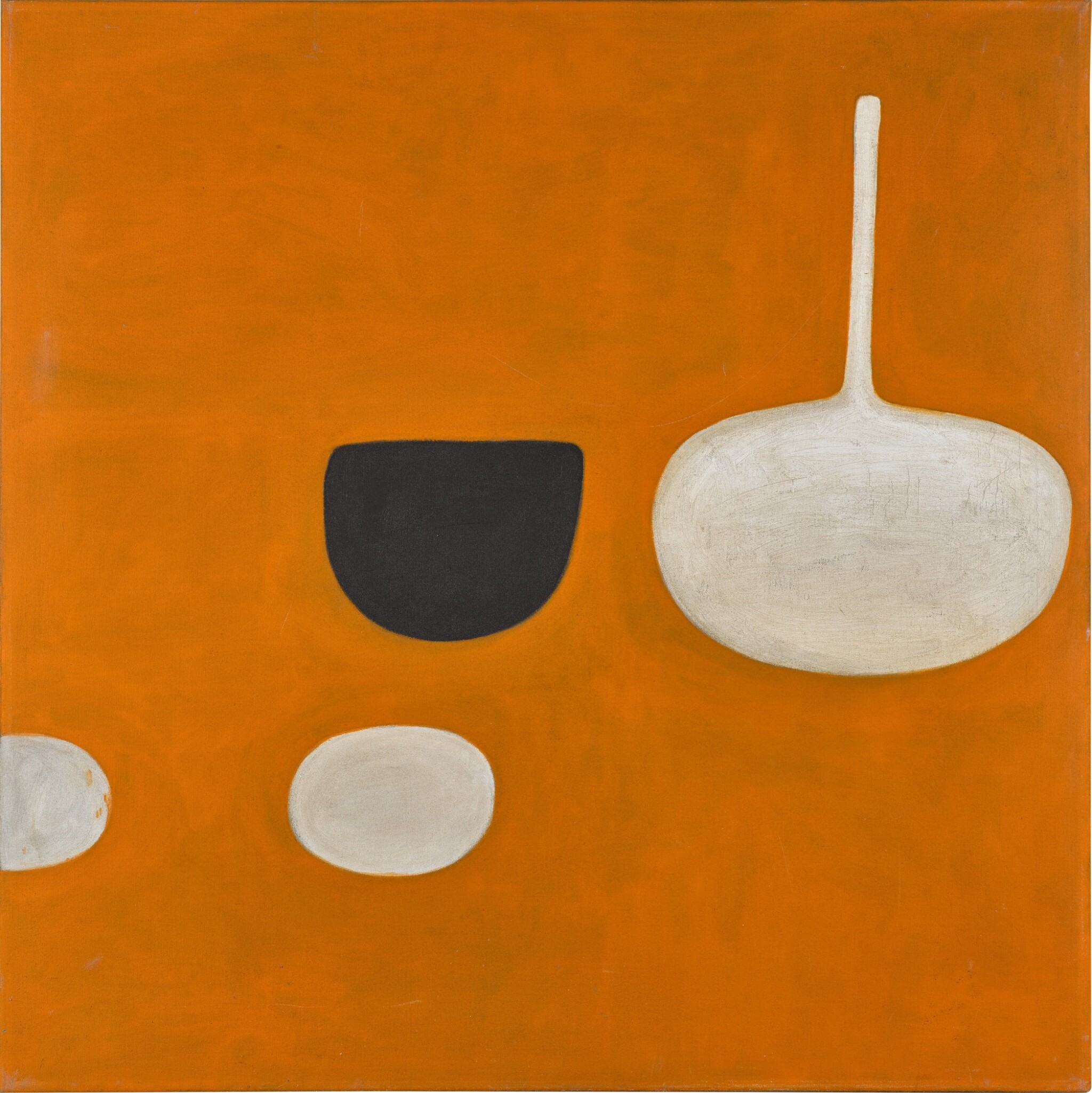 Original canvas. The work appears in very good overall condition. There are some light abrasions to the corners of the work. Some further light surface abrasions, including above the white pan, black bowl and also near the lower centre edge. There are some drying cracks visible to the white saucepan, which appear stable and are common within Scott's working method. Some traces of surface dirt. Under UV light there appear to be no signs of retouching. Held in a simple wooden frame. Please email charlie.minter@sothebys.com if you have any questions regarding the present work.

Recognised perhaps most distinctly by his clean, graphic and primitive still lifes, William Scott’s Still Life on Orange, painted in 1970, reflects the artist’s life-long preoccupation with this traditional subject. His commitment to the genre was the defining feature of his career, highlighting both his individual and, importantly, significant contribution to Modern British painting in an age of bold and audacious Abstract Expressionist painting in America.

In Britain, Scott was among an important of group of post-War painters such as Patrick Heron, Terry Frost and Peter Lanyon who were challenging academic tradition and expanding painting’s horizons. In this regard they shared a dialogue with their counterparts in the United States, whose work Scott witnessed first-hand in 1953, meeting some of the New York School’s most prominent figures such as Rothko, de Kooning and Pollock. He described his experience of their art as one of ‘bewilderment, it was not the originality of the work, but it was the scale, audacity and self-confidence – something had happened to painting’ (Scott, quoted in Norbert Lynton, William Scott, Thames and Hudson, London, 2004, p.109). However, with his affiliation to the genre of still life, Scott never abandoned representation completely; his work balances between the power of American Abstract Expressionism and the more figurative Modernism of Europe.

The saucepans, knives and bowls that peppered Scott’s work during the 1950s took centre stage in the late 1960s and marked a wholehearted return to the subject matter. Still Life on Orange is a striking example of his undivided attention to the power of these primitive forms. Just as the violin was to Braque and Picasso in the first half of the twentieth century, the saucepan became the fundamental vessel of Scott’s Presbyterian upbringing, which he experimented with constantly throughout his career and found within an ever-evolving means of expression. The two-dimensional treatment of the austere utensil in the present work is bound by a sensitive painterly line that, like the other three forms, offers an overall organic and harmonious answer to the modern question of painterly abstraction. Alan Bowness described this as a negotiation between ‘austerity and sensuality’, a sentiment that is evident in many of Scott’s minimalist works during the 1970s.