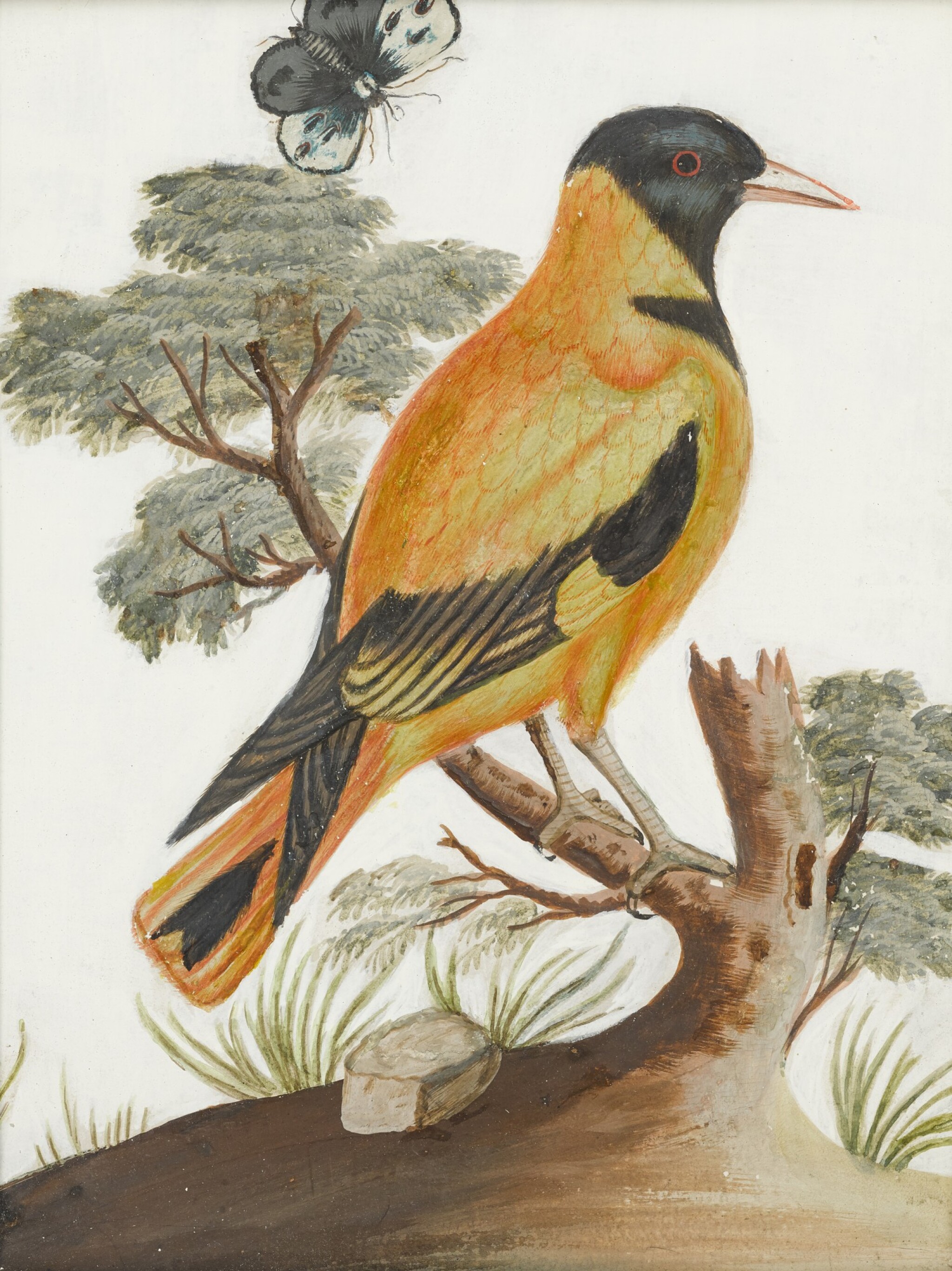 depicting in basso relievo various birds perched on branches or rocky outcrops, in associated gilt-japanned frames, with labels affixed to the reverse of three frames identifying the species

A very decorative group of pictures. The gouaches in good condition, the colour is crisp and there is little evidence of wear. The white background has been carefully refreshed. The frames show signs of wear, with small losses to the black japanned layer. One of the labels has a section torn off, but the others are well preserved and clearly legible. Old marks, chips and scratches consistent with age and wear. Very slight variation in size of the frames (ca. 3mm)

The labels read as below. Where sections of the label are torn, gaps are denoted by [...], and any words inferred from context are also in square brackets.

The red-legg'd PARTRIDGE, from Barbary.

THIS bird is ſomewhat leſs than the common Partridge,

the Bill is of a fine Scarlet Colour, the Eyes are of a

Hazel Colour, the Eye-lid all round the Eyes of a fine

red, the Top fo the Head is of a bright Cheſnut Colour,

which paſes down the hind Part of the Head, where it

becomes more Duſky, ,and forms a Ring quite round the

Neck, reſembling a Necklace; the Legs and Feet are of a

red Colour, it hath ſmall Spurs, and the Claws are Brown.

A pair of theſe Birds were ſent alive to Europe by Mr.

Thomas Rawlins, Merchant, reſiding at Santa Cruz, in that

part of Barbary which is without the Streights of Gibral-

tar, on the Atlantick Ocean.

The Pea Hen PHEASANT from China.

THIS Bird is a third Part leſs than the Cock, but agrees

Pheaſant Kind, it having all its Marks though much Duller;

the Legs and Feet are of a dark Brown, or blackiſh Colours,

and it hath no Spurs. This Bird, with its Male, was in the

Poſſeſſion of Dr. Monro of London, who had great Hopes of

breeding from theſe rare Birds, for which Purpoſe he made

a convenient Place at his Houſe in Croydon near London, but

the Hen dying before they had Time to breed, he was diſap-

pointed in his Expectation. The Butterfly with many other

As to the Flower vide the Cock.

THIS Bird is about the Bigneſs of a Jay, the Make of

the Body is rather long than round; it is a very ele-

gant Bird, both for Shape and Colour; it is very active,

this Bird's Feathers is ſo fine th[...] diſtinct Form of

Feathers can be [di]ſcovered [...] Wings and Tail.

NOTWITHSTANDING THIS REPORT OR ANY DISCUSSIONS CONCERNING A LOT, ALL LOTS ARE OFFERED AND SOLD AS IS" IN ACCORDANCE WITH THE CONDITIONS OF BUSINESS PRINTED IN THE SALE CATALOGU

Christie's London, Important English Furniture, 5 April 2001, lot 231 (£11,163 with premium)
Samuel Dixon was a well-known Irish artist who predominantly produced gouache paintings of vibrant birds and flowers from across the globe. The present lot are from 1750, in a suite that came to be known as his 'Foreign Bird Set'. The first painting in the series, not included in this group, bore the label 'To the Right Hon. CHAWORTH BRABAZON, Earl of Meath, these twelve pieces of Foreign Birds, done in Basso Relievo, and painted in their natural Colours, are dedicated by his Lordships most humble and most obedient servant SAMUEL DIXON'. The basso relievo technique refers to the method of impressing selected parts of the design using a copper plate, creating a raised surface on which gouache would then be applied.