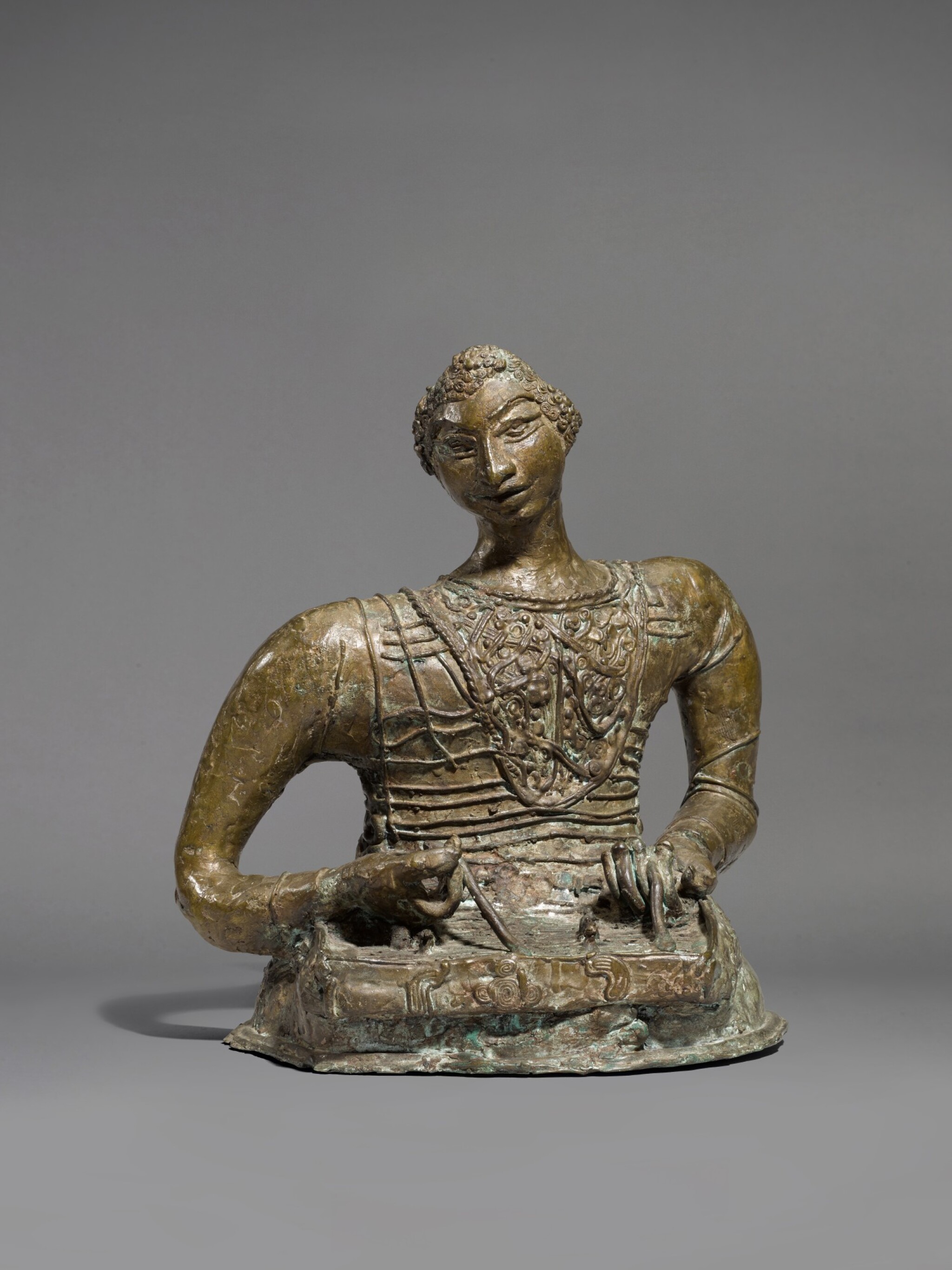 This work is unique

Gifted by the artist to Geoffrey Moorhouse, 1981

Gifted by the above to the current owner, 2021

Geoffrey Moorhouse (1931-2009) was an English author and journalist, known for his travel writings. A number of his books are based on his time in India, such as Calcutta (1971), India Britannica (1983) and Om: An Indian Pilgrimage (1993). Through his profound interest in the artists of Bengal, Moorhouse became close friends with sculptor Meera Mukherjee. Moorhouse and Mukherjee had a shared appreciation for the Buddhist faith – the last great work of the sculptor’s career was a monumental Buddha, now at Badamtam Monastery, Darjeeling. The proceeds of Santur Player (1981) will be put towards a project of the Triratna Buddhist Order to help promote Buddhism in the city of Kolkata, West Bengal.

The sculpture of Santur Player shows the elegantly seated musician immersed in his music, testifying to Meera Mukherjee's ingenuity as a sculptor and her love for music. Parallel to art, she had a lifelong interest in music and believed that her sense of music shaped her vision and, by extension, her sculpture. A trained singer, she loved to sing the songs of Rabindranath Tagore and, although she was fond of listening to a wide variety of music ranging from Bengal folk songs to German lieder, she had a strong preference for Indian classical music. Besides the diary entries and conversations with music mentor Bimala Prasad Mukhopadhyay, her love for Indian classical music is evident in the several fine bronze sculptures of musicians she created at different points of her astonishingly rich and productive career.

Meera Mukherjee (1923-1998) grew up as an ailing child in rural Rajshahi (now Bangladesh). Then, when she was about fourteen, she came to Kolkata to study art at the Indian Society of Oriental Art. In her long career, Meera took lessons in modern sculpture in Germany and metal crafts from the traditional master-artisans in India – the Gharva families of Bastar, Acharyas of South India and Shakya artisans of Nepal. She learnt the techniques as an apprentice, but with open eyes, sensitive to the feelings and cultural differences that shaped the meaning of the objects and practices. Indeed, the delicate wax wires, large iconic eyes, simplicity of form and intricate motifs and patterns in her mature work evoke the strong presence of rural arts of India. However, her work was not directly inspired by primitivism or the idea to represent the unsullied village-India, untouched by colonial modernity. A marginal female artist in the male-dominated art scene, she did not just want not to create a unique personal style, the task she did much too well, but to locate and define the place of the artisan, who she calls Vishwakarma, in the mainstream artistic, cultural and even political life of modern India.

One of the finest examples of Meera Mukherjee's unique style of narrative sculpture, the sculpture of the mango orchard [Lot 11], shows her mastery in metal casting. It explores figure by figure, building an openness of space that supports the narrative relationships. No correct vantage point would provide coherence to the objects and figures; the time is rendered relaxed and not dramatically intensified in the rural scene. Like many of her sculptures of rustic themes, this one may be inspired by her childhood memories of Rajshahi. The non-synoptic space, simple figuration and intricate craftsmanship in this and other narrative sculptures indicate her general preference for non-classical, non-naturalistic artistic traditions of the world. In the great museums of Europe, she admired Michelangelo but was influenced by the early Greek, Etruscan and Byzantium art as a student. Later, she drew a parallel between them and the rural crafts of India. The connection, though simplified, helps us understand the cross-cultural dialogic context in which her work can be best seen and judged.

Arkaprava Bose is an art historian, writer and archivist. A Master of Fine Arts and Doctor of Philosophy in Art History at Visva-Bharati, Shantiniketan, his PhD thesis was titled 'Modernism and the Graphic Art of Bengal'. Bose has lectured at the Satyajit Ray Film & Television Institute and is currently a researcher and archivist at Emami Art in Kolkata, West Bengal.