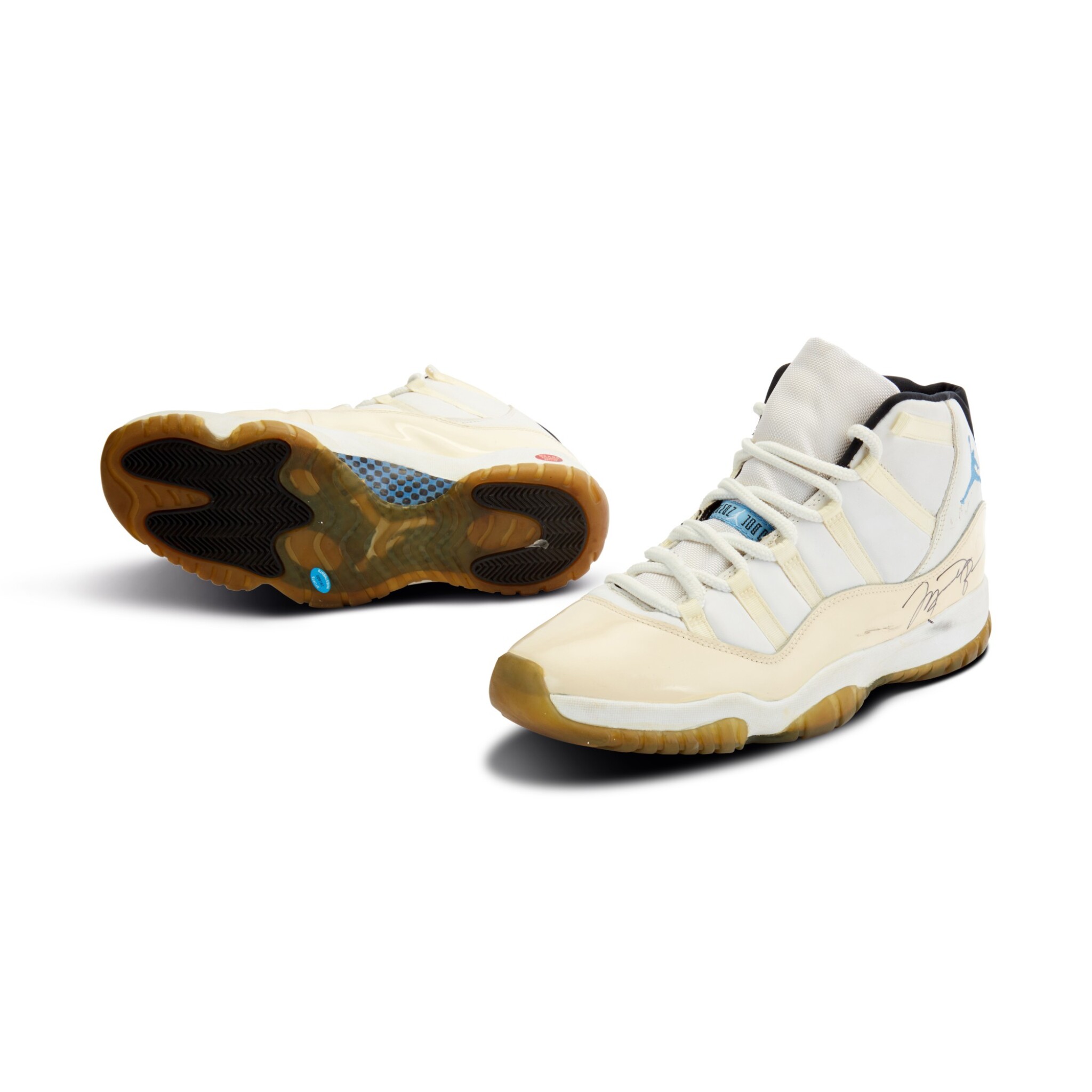 The left sneaker is missing a tag. The right sneaker does have appropriate FTPS (Player Sample) tagging. The shoes show wear. Sotheby’s cannot determine if the shoes were worn as a pair by Jordan, or placed together as wear appears uneven.

The Air Jordan 11 was worn by Michael Jordan during the 1995-1996 NBA season. This season would prove an iconic one for Michael, winning his fourth NBA MVP title (leading the Bulls to 72 wins), with an additional NBA Finals MVP title after the Bulls defeated the Seattle Supersonics in the Finals.

This version, in the famed ‘Columbia’ colorway, has wear attributed by MEARS to Jordan either at practice or generally during the 1995-96 season. He would wear another identical pair of this shoe only once during a professional game, the 1996 NBA All Star Game. The rarity of the pair and the styles’ use during the All Star Game makes it a favorite among Jordan fans and sneakerheads worldwide.

By the time Michael Jordan retired he was a 2 time Olympic Gold Medal winner, 6 time NBA champion, a 6 time NBA Finals MVP, a 5 time NBA Most Valuable Player, a 14 time All-Star, a 3 time NBA All-Star Game MVP, a 10 time scoring champion, and a 2 time Slam Dunk Contest Champion. He was awarded the Presidential Medal of Freedom in 2016, among the highest civilian awards in the United States.

In regards to the attribution of use, the sneakers are accompanied by a Letter of Opinion from MEARS Authentication, LLC, with an “Authentic” Final Grade. In further email correspondence between MEARS and Sotheby’s, Troy Kinunen of MEARS affirmed he felt they could have been used in Practice or generally by Jordan. They have a letter from James Spence Authentication in regards to the signature. A Chicago Bulls letter accompanies the pair. Sotheby’s does not know about the history of the Bulls letter or its quality.