Property of a Lady | 女士私人收藏 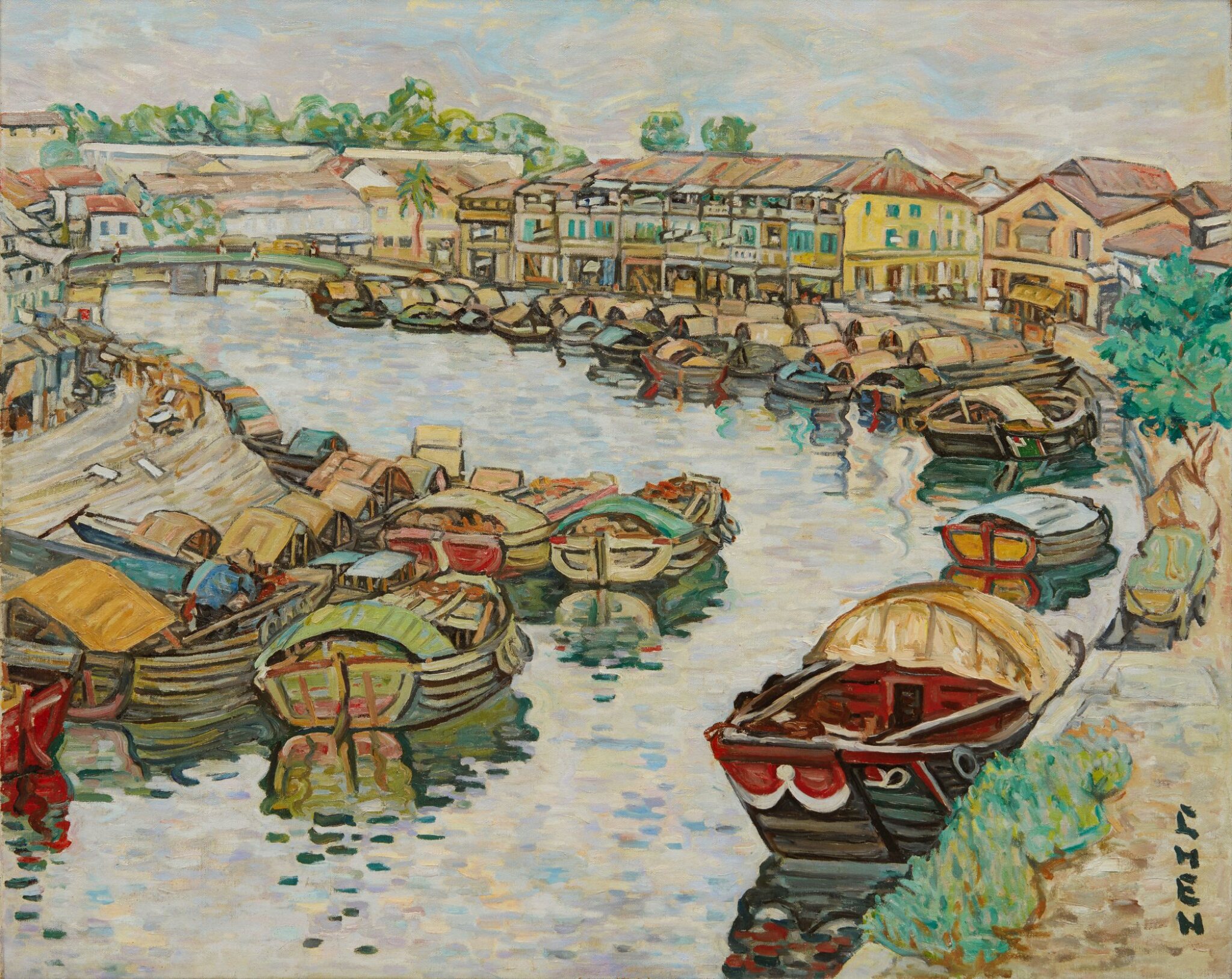 Property of a Lady | 女士私人收藏

For further information on the condition of this lot please contact michelle.yaw@sothebys.com

Sotheby’s is honored to present Georgette Chen’s Boats and Shophouses upon Sotheby’s auctions return to Singapore after 15 years. A seminal masterpiece by one of the most exceptional figures in Asian art, the present lot is one of the strongest works by the artist to come to market and the first of Singapore shophouse, waterfront scene to be presented at auction. Sprawling with vibrant color, vivacity of life, Boats and Shophouses is a celebration of Singapore’s history as a trading port and convergence of cultures.  This exceptionally rare, fresh to market work, was first purchased directly from the artist in the 1990s. A superb exemplar of Georgette Chen’s mature style developed during her time residing in Singapore, the painting is expansive in scale, yet intimate in detail. Encountering any work by Chen is fascinating as much as it is a profound and rare, as most of her works are in museum collections.

A highly accomplished painter with tremendous ability, Chen was an independent female who carved a unique identity amidst the male-dominated arena of 20th century art. She received her art education at prestigious schools in Paris, New York and Shanghai; and in the art realm of those same countries gained exposure and exhibited her works. Chen moved to Southeast Asia in her late 40s, settling in Singapore in 1953 where she taught at the Nanyang Academy of Fine Arts (NAFA) for over 20 years until her retirement in 1980. Her enduring legacy is also seen in the recent retrospective at the National Gallery Singapore; titled Georgette Chen: At Home in the World with works from various institutional and private collections.

While frequently identified as the only female pioneering artist of the 'Nanyang School', Chen is also indisputably a Sino-Parisian artist, having studied, lived and exhibited in France. The daughter of a businessman who dealt in Asian art and antiques, Chen travelled throughout China, Paris and New York during the earlier years of her life. Her life spanned four wars – two Chinese Revolutions of 1911 and 1949, World War I and World War II, and led her to reside in different countries. This cosmopolitan perspective fueled her practice, leading her to develop a style that blended Eastern and Western approaches. Her oeuvre represents only meaningful reflections of her eventful life, but also the ambitions of a woman artist determined to create new forms and perspectives in her work.

In 1930, Chen married her first husband, Eugene Chen Youren, the Chinese Foreign Minister at the time, linking her to Chinese history at a pivotal moment. Within that same year, Chen’s works were accepted for exhibition at the Salon d'Automne in Paris. She would continue to participate in important exhibitions in Paris, including the Paris World Fair, and the Women Painters Exhibition in 1973. In the 1940s, when Chen and her husband resided mostly in Shanghai, Chen also developed an audience in China, presenting her works in two solo exhibitions.

Boats and Shophouses represents an iconic and nostalgic Singaporean scene, frozen in a moment of modernity and change. Depicting the colorful shophouses and sampans that lined Singapore’s river, the work brims with energy and life. The ‘inverted C’ composition of the river scene gives a great sense of depth and dynamism, to a highly populated canvas. The densely packed shophouses and small boats docked along the river, line both sides of the river and are painted with immaculate detail. Chen plays with scale and perspective. In the far distance, a green bridge marks the horizon line, as tiny human figures walk quietly across, while in the foreground, a boat man appears to crawl out from under the roof of his boat.

Chen employs short, staccato brush strokes of varying shades of pastel blue, greys, purples and pinks to create a sense of rhythm on the water’s surface. This unique, playful style, reminiscent of the post-impressionist Pointillist technique, was developed during the latter stage of Chen’s career and is employed in significant works such as Lotus Symphony, currently in the collection of the Long Museum, Shanghai.