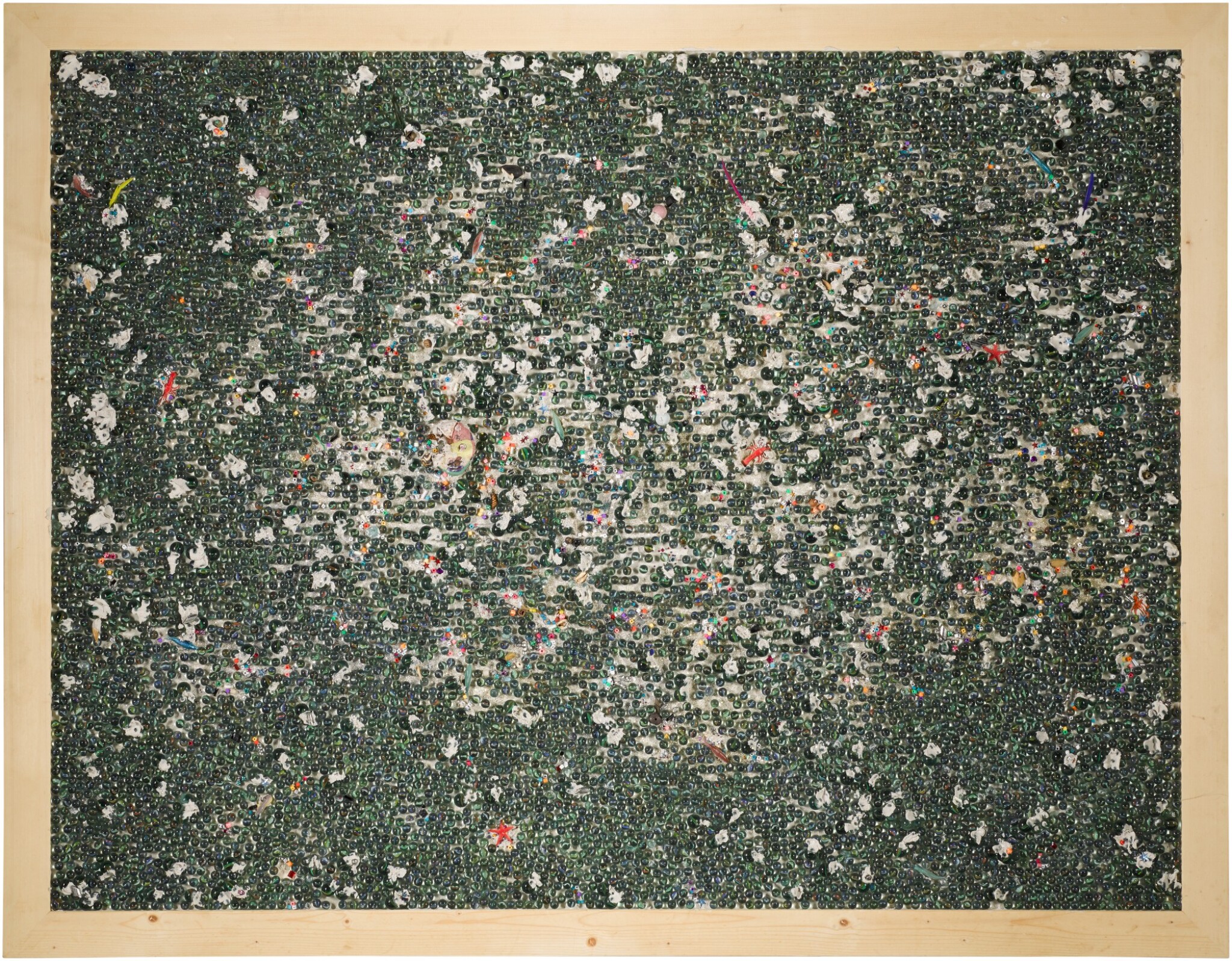 Scattered very light handling marks along the edges of the wooden frame. Two apparent missing marbles to the centre of the left-hand edge. This work appears to be in very good original condition.

Lampedusa C (2016) is a striking work from Cameroonian artist Pascale Martine Tayou, part of a series of the same title. Made of coloured marbles, beads, plaster and plastic toys, the work deftly captures the hypnotic natura power of a vast body of water. The work and series is named after the largest of the Italian Pelagie Islands, jutting out from the Mediterranean sea as the closest point between southern Europe and Africa. Since the start of the millenium, the island has become a prime transit point for people making the journey from North Africa to Italy. It also has become the most dangerous migrant path in the world: over the course of four months in 2015, around 1600 migrants died during the crossing.

Lampedusa C perfectly encapsulates the tragic beauty of the island: the deep turquoise of the marbles match the stunning natural colour of the waters surrounding the island, but the white-capped waves conceal something much more dangerous. Small wafts of white plaster dot the reflective surface, turning the solid mass of glass spheres into a dynamic, whirling patch of ocean. At first glance, the delicacy and reflectiveness of the surface of the work is strikingly beautiful and tranquil, but on closer inspection we see the harsh realities of the plight of migrants making the crossing. The artist embedded small relics like feathers, beads, and crumbling plaster heads within the sprawling expanse of marbles - small reminders of the real human lives lost beneath the surface, floating forever amongst the plastic sea creatures nestled within the waves.

Tayou expertly balances whimsicality and playfulness in his use of found objects, with a desire to explore the real, often dangerous experiences of individuals moving through our modern world. His signature playfulness in his craftsmanship sees him transform everyday discarded objects into poignant and deeply moving works, to be used as catalysts for discussion about the wider issues of our world, especially in relation to his own African identity. Born in 1966, Tayou’s impressive oeuvre has reached a broad global audience, taking part in a number of prestigious major international exhibitions and events, such as Documenta 11 (2002) and the Venice Biennale (2005 and 2009).