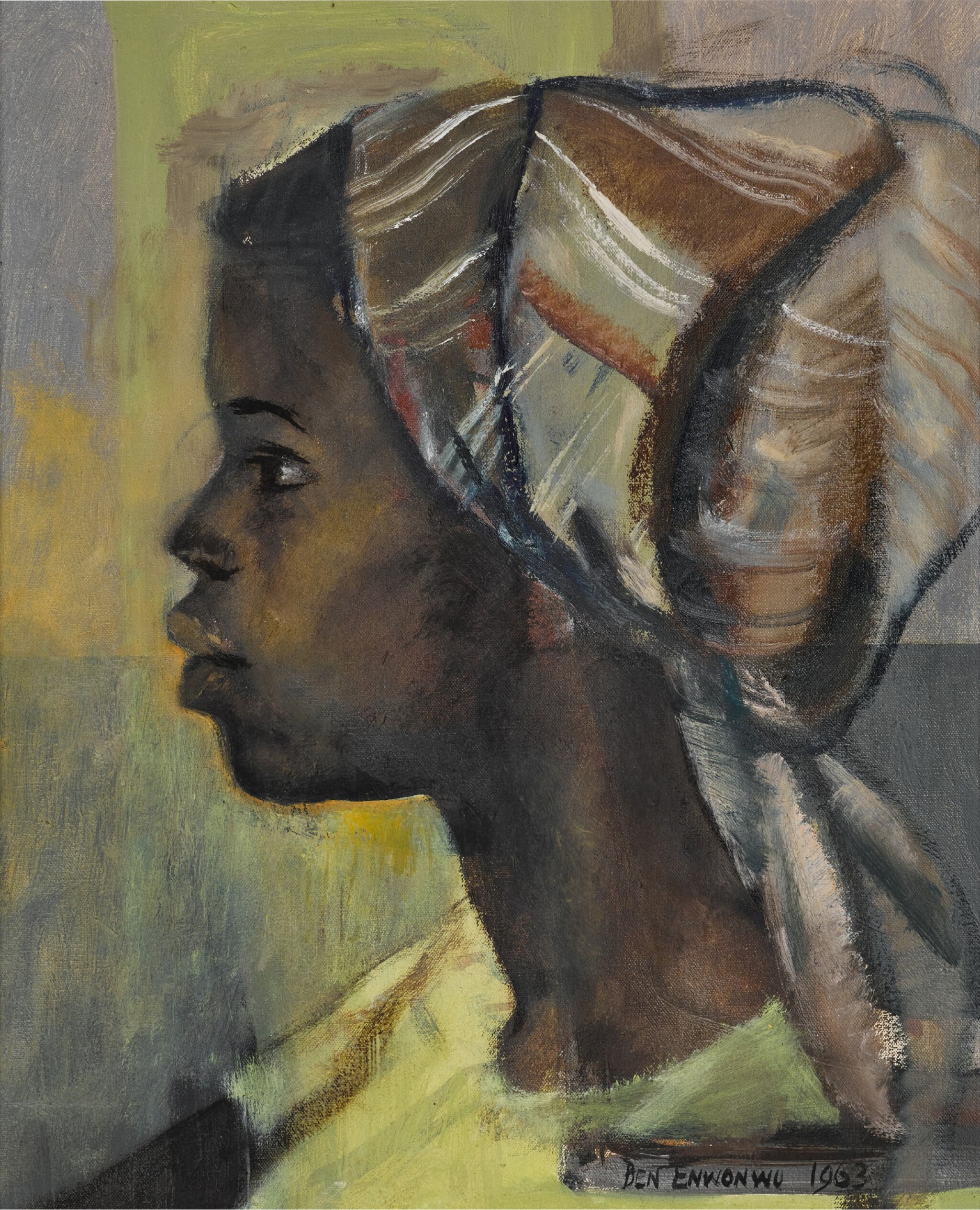 There are scattered very light white traces in the lower left corner of the work. Some very minor surface loss to the corners of the work, only visible on very close inspection. The edges of the work exhibit light stretching marks. Overall, the work appears to be in very good condition. Inspection under UV light reveals some very light discolouration along the framing edge where the surface of the work was covered by the frame. No clear signs of restoration or repair.

Nigeria gained independence from the United Kingdom on 1 October 1960, and with it the country was in search of a new post-colonial identity. By 1963, when the present lot was painted, Enwonwu was internationally recognised as Nigeria's premier artist. Exceptionally gifted, the artist was armed with an ability to orate, author unique essays and paintings to illustrate a belief that for Nigeria to regain a sense of its indigenous identity, unsettled by colonialism, it was imperative for the nation to push for cultural affirmation through the development of a new visual language.

Weary of the hasty acceptance of European abstraction amongst Nigerian artists, Enwonwu, in 1963 wrote the article Into the Abstract Jungle: A Criticism of the New Trend in Nigerian Art. His artistic practice had taken on another dimension in his own quest to represent a modern Nigeria, affirming his belief “that postcolonial African art must reflect the aspirations of independent African people”. The article was perceived as an attack on abstraction by his peers. However, Enwonwu’s presupposed opposition to abstraction was misunderstood, and the present lot perfectly exemplifies the artists mastery of employing European techniques to convey African subject matter in both abstract and figurative forms, which is what was implied in his writing. Enwonwu advocated a new modern Nigerian national culture, and it was in this context that Enwonwu painted this sensitive Portrait of a young woman.

The sitter represents the new Nigeria, with her modern hairstyle and dress, and her salient expression and focus outside of the frame captures the mood of the youth in Nigeria at the time; it is bold and self-assured, yet optimistic of the future. He deftly showcases his mastery of colour in the work, especially in his application of paint to his sitter’s clothing, which ultimately serves as a framing device to draw attention to her face and soft features.