Property from the Collection of Mr. & Mrs. Quincy Troupe 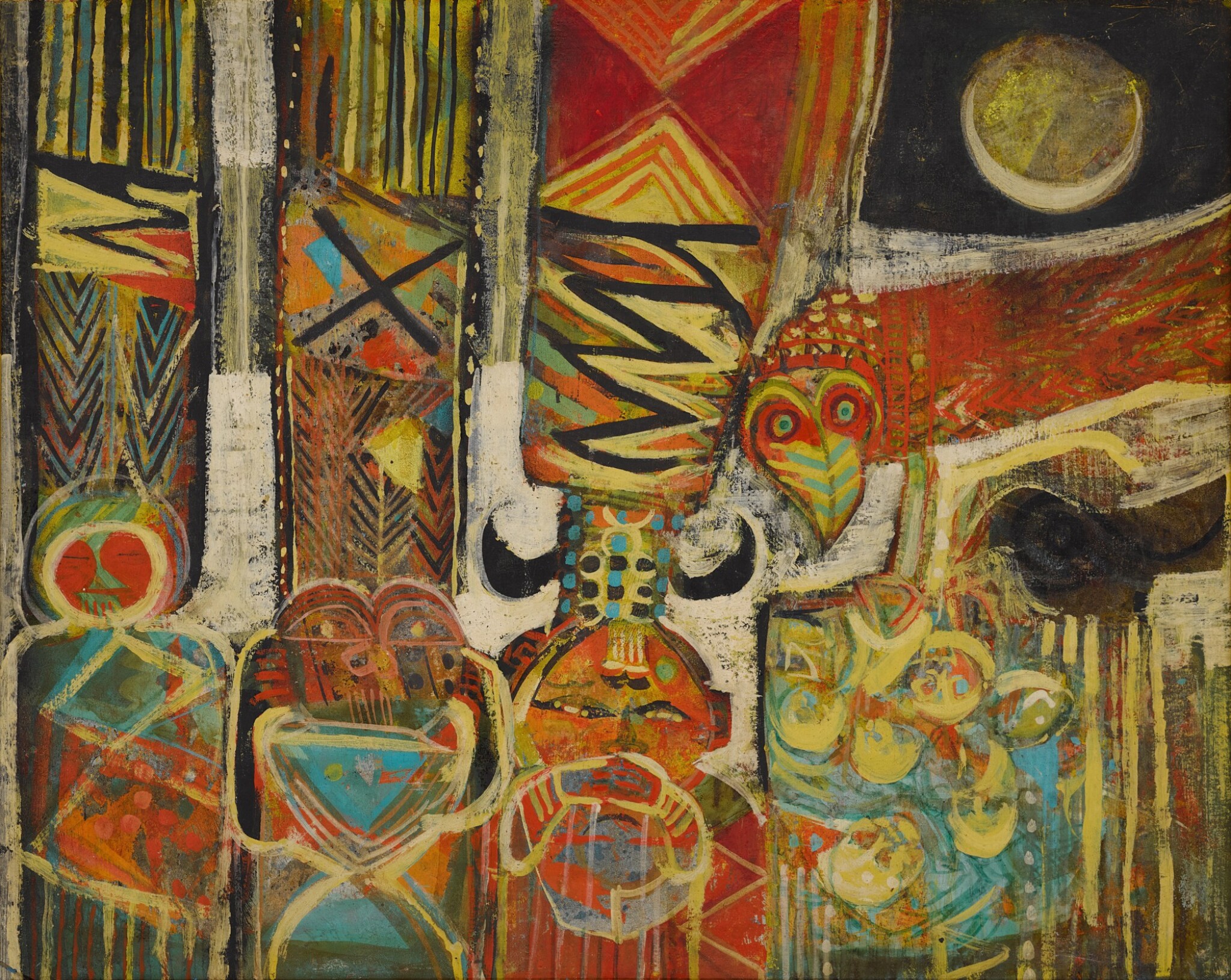 Property from the Collection of Mr. & Mrs. Quincy Troupe

This work is in overall good condition. There is evidence of wear and handling to the edges and corners with associated losses at the corners and hairline craquelure at the turning edges. The corners of the work appear to be bent, likely from previous framing intent. Upon very close inspection and raking light, there is evidence of hairline craquelure throughout. Inspection under UV light reveals no clear signs of restoration or repair. This work is framed.

Purchased directly from the artist by the present owner c. 1970s

'Selection of African Writers and Artists', Mundus Artium: A Journal of International Literature and the Arts, Vol. IX No. 2, 1976, illustrated p. 39

The present lot is a fusion of Skunder's interest in both the metaphysical world and Pan-African culture and visual languages. Featuring the famed illuminated healing scrolls of the Ethiopian Orthodox church, a prominent feature in many of Skunder’s seminal works and a likely symbol for the healing of post-colonial Africa, the present lot embodies the most important aspects of Skunder’s groundbreaking practice. Here, Skunder creates his own modern African visual language to explore an afro-centric metaphysical world. Skunder presents a tangible and intangible philosophical exploration into modes of existence and creation, producing works that possess a undeniable ethereal and cosmological formal element and a deep and widespread appreciation for the history and traditional culture of Africa.

An accomplished artist from a young age, Skunder won second prize in the National Art Exhibition in celebration of the Jubilee Anniversary Celebration of Emperor Haile Selassie in 1954. Shortly after, he was awarded a scholarship to study at the St. Martin’s School of Art, Central School of Art and Design and the Slade School of Fine Art in London and then at the Académie de la Grande Chaumiere and the Ecole Superieure des Beaux Arts in Paris.

Skunder becomes completely immersed in 1950s-60s Paris, mixing with black intellectuals, creatives and political activists who have flocked to the French capital, including leaders of the Négritude movement and famed Jazz musicians the likes of Bud Powell and Sonny Rollins. Indeed, many of Skunder’s works display a uniquely rhythmic quality and embrace the Négritude movement’s pan-African approach, featuring elements and iconography from an array of traditional African culture.

It is within this circle of Pan-Africanist that Skunder is encouraged to further his study of African cultural traditions and their role in the development of European modernism; he becomes particularly interested in Dogon and Bwa masks from West Africa, and famously, the illuminated healing scrolls of the Ethiopian Orthodox Church, a hallmark of his later practice. Skunder also seizes the opportunity to study the work of other Modernists – his work is often linked to that of Paul Klee and Wilfredo Lam– and immerses himself in the Surrealist manifesto of André Breton.

Returning to Ethiopia from Paris in 1966, Skunder would spend just five years teaching at the School of Fine Arts in Addis Ababa before moving to the United States in 1970 to accept a position at the Atlanta Center for Black Art, then at Howard University from 1972-2001. When a civil war broke out in 1974, Skunder could not return to his home and would live in exile in the United States until his death in 2003.

Skunder Boghossian is recognised one of the most important Ethiopian modernists of our time and the first contemporary African artist to have work purchased by MoMA. The present lot highlights Skunder’s dedication to the cultures of his home continent, despite spending a relatively short period of time there, and his adeptness at balancing colour, texture and composition against a powerful conceptual framework.