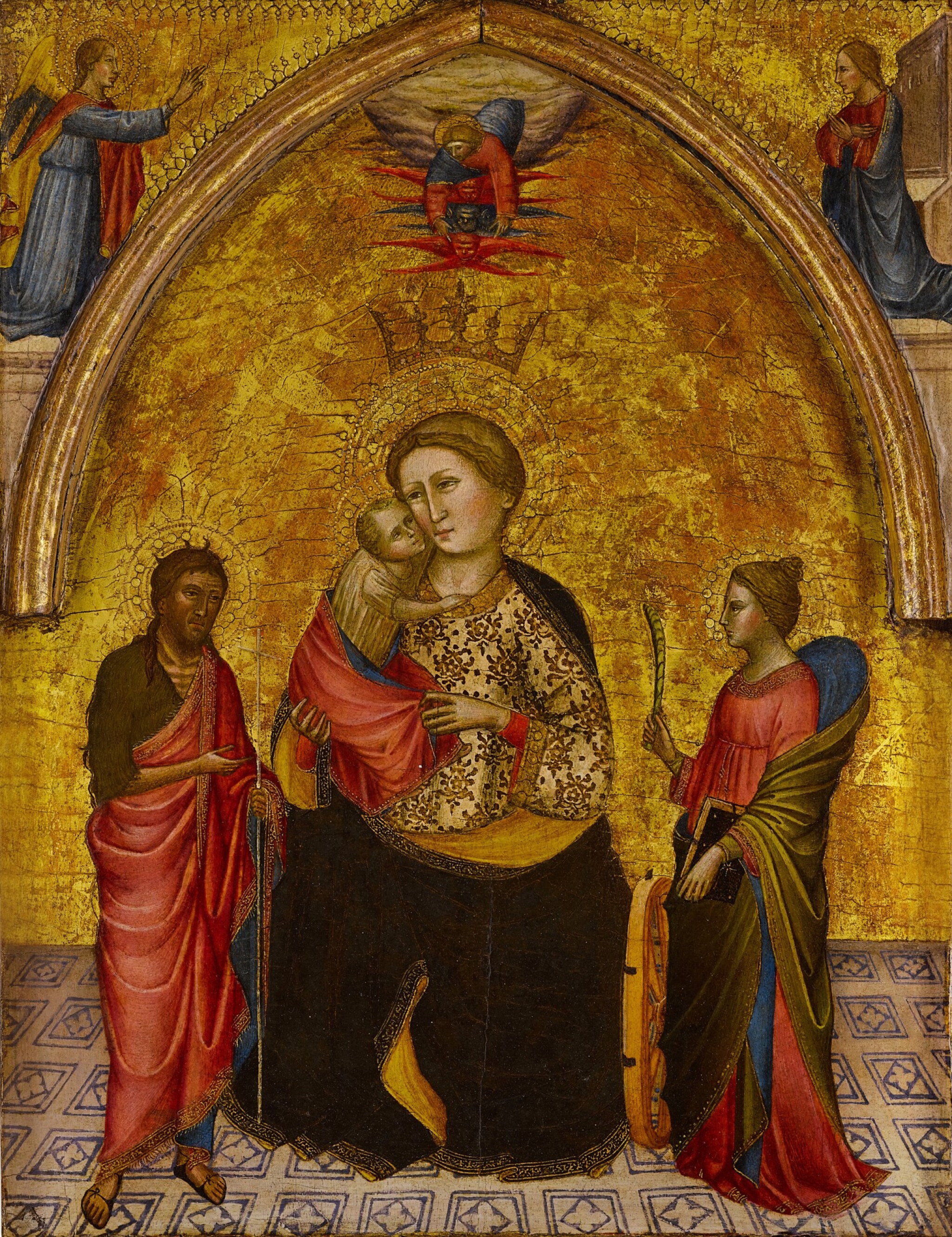 The following condition report has been provided by Karen Thomas of Thomas Art Conservation, 119 West 23rd Street, Suite 400, New York, NY 10011, 212-564-4024, karen@thomasartconservation.com , an independent restorer who is not an employee of Sotheby's.

This painting is in sound condition overall and structurally solid.

The paint layers appear to be free of abrasion or cleaning damage. Mary's patterned dress, done in a technique that can be particularly vulnerable to damage, is in excellent condition, and the delicate gold embellishments on the garments are nicely preserved. It seems likely that Mary's blue mantle has darkened over time, a common aging phenomenon. Precise retouching, visible to varying degrees under UV illumination, carefully compensates for very small losses that are scattered throughout the imagery. Retouching in the faces has been applied to improve legibility of the details. The gold ground is worn but has been toned to visually integrate areas of loss with the existing gold leaf. The back of the panel was painted dark brown, perhaps once mimicking stone, but much of the paint has been worn away, exposing the wood. The vertically grained wood support is comprised of a panel of two boards joined at the center, with attached moldings. The panel is planar and appears to be structurally sound. The applied moldings to create the arch and casseta frame are also in very good condition. This artwork may be displayed in its current state.

Private collection;
From whom acquired by the present owners.

This charming early painting by the Florentine artist Mariotto di Nardo probably dates to circa 1390, when he worked most closely with Agnolo Gaddi. The use of floor tiles to create a sense of spatial recession and the inclusion of a crowned Madonna and a foreshortened figure of God the Father emerging from the Empyrean are characteristics shared with Mariotto’s Madonna and Child with Saints John the Baptist and Andrew (Lille, Palais des Beaux-Arts, inv. no. 810), painted at the same moment in his career. In terms of dress and pose, the Madonna and Child are most closely related to Mariotto’s similarly-dated Madonna and Child with Six Saints (Avignon, Musée du Petit Palais, inv. no. 369).

This panel, which is larger than most works intended for private devotion, may have originally decorated a family chapel or have been destined for an ecclesiastical order. The inclusion of two of the most popular saints in the Renaissance, John the Baptist (wearing his traditional camel shirt and red cloak and holding a cross) and Catherine of Alexandria (accompanied by the spiked wheel of her attempted martyrdom and holding a book and palm branch), may hold a clue to the painting’s original patron.

The son of the painter Nardo di Cione, Mariotto was a prolific artist who worked in fresco and on panel and illuminated manuscripts. During his career, which spanned the dawn of the fifteenth century, Mariotto enjoyed commissions from Florence’s most important civic and religious institutions, including the churches of Santa Maria del Fiore (the Duomo) and Santa Maria Maggiore as well as Orsanmichele, an important Marian shrine and the city’s granary.

An attribution to an unidentified hand in the Workshop of Agnolo Gaddi, a studio in which many of the greatest artists of the next generation of Florentine painters trained, has also been suggested for this panel.

We are grateful to Christopher Daly for suggesting an attribution to the young Mariotto di Nardo.