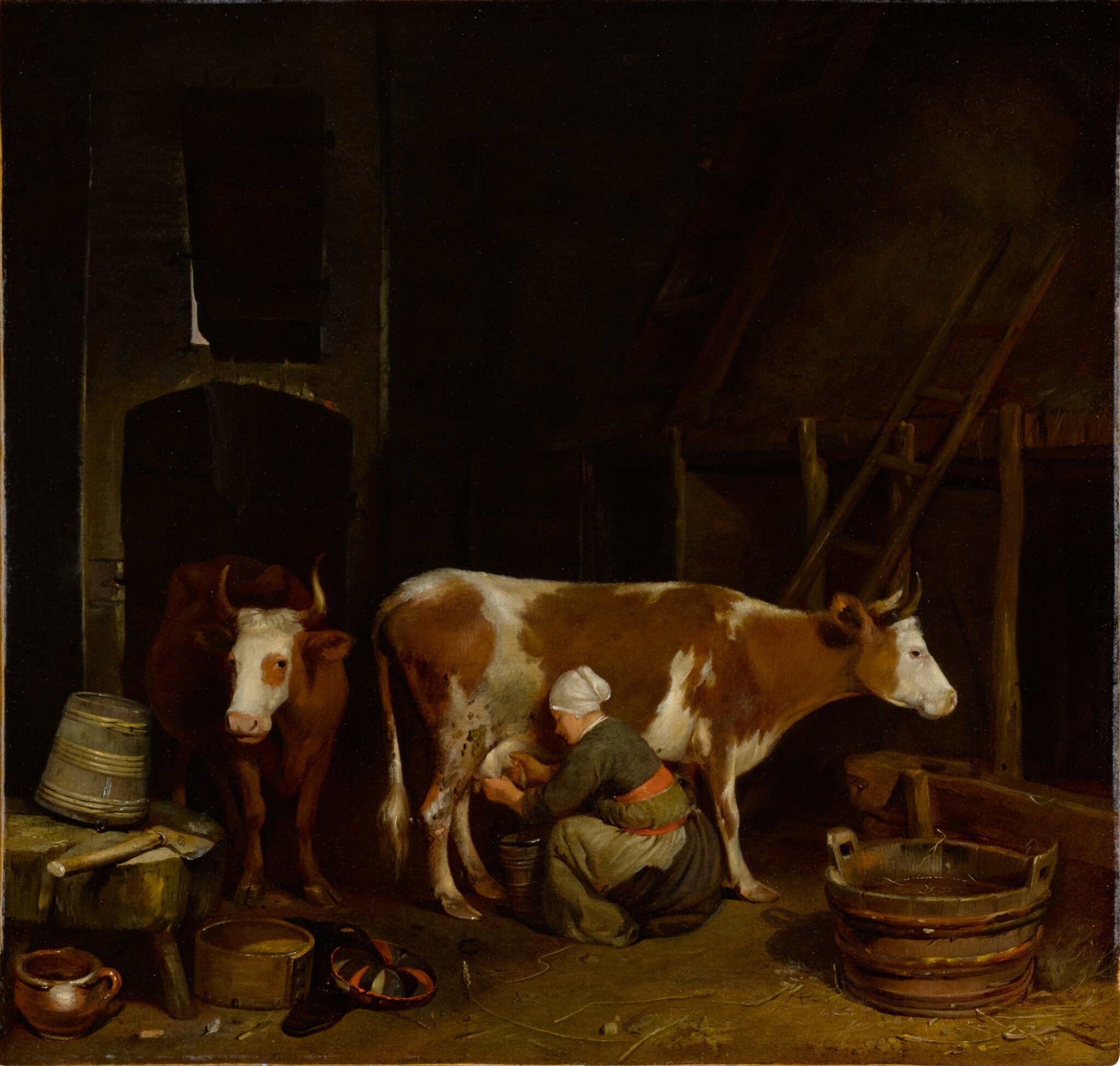 The canvas is lined and is taut and stable on its stretcher. The paint surface is stable, and the overall image reads clearly beneath a crisp varnish. There is a very faint pattern of craquelure throughout, as typical with age, although is not distracting. Inspection under UV reveals a milky varnish, beneath which there may be an older campaign of restoration. UV further reveals some scattered strokes of retouching in the background primarily to address craquelure and some thinness in the brown tones, for example in the shadows between the cows. There are a few spots of well-retouched repairs here and there in the background for example near the upper and lower edges and some thin old retouches in the upper register. There is an old retouched and restored thin tear in the lower right corner that runs through the front legs of the cow, and around which there are a few isolated and scattered spots of restoration, including one in the seated figure. There is a thin line of restoration to the right of that cow near the edge. There are some additional scattered small cosmetic spots of retouching in the cows and the still life elements. These retouches are largely well applied, and the painting can certainly hang as is. Offered in a dark wood frame with a gilt liner.

There acquired by F.W. Lippmann;

Prague, Národní Gallery, 1992-2007, on loan.
This is the only studio replica of ter Borch’s painting of c.1653/1654 in the Getty Museum, which has been described as “the most remarkable expression of ter Borch’s familiarity with rural life.”1  Many elements in the present picture are close in quality to the Getty painting: the cow on the right is painted with tremendous sensitivity and attention to detail, from her pale eyelashes and moist nose to the flashes of light glinting off her hooves. The farm implements at lower left and the milkmaid are similarly accomplished.

Gudlaugsson’s catalogue raisonné lists nearly 500 copies of Ter Borch’s paintings, of which the vast majority are weak, later pictures. Only 29 of the copies bear the artist’s monogram, and even among this small group, Gudlaugsson dismissed the majority as too unaccomplished to be the product of the studio.  Indeed, he only accepted 11 monogrammed copies as being clearly from the Ter Borch workshop, five of which – the present painting among them – he suggested could be by a young Caspar Netscher.2  Netscher, ter Borch’s prized pupil, spent nearly five years in the studio, from 1654 to circa 1659, where his duties would have included executing faithful copies of his master’s works.  The finest replicas would have been signed with the GTB monogram and sold as ter Borchs.