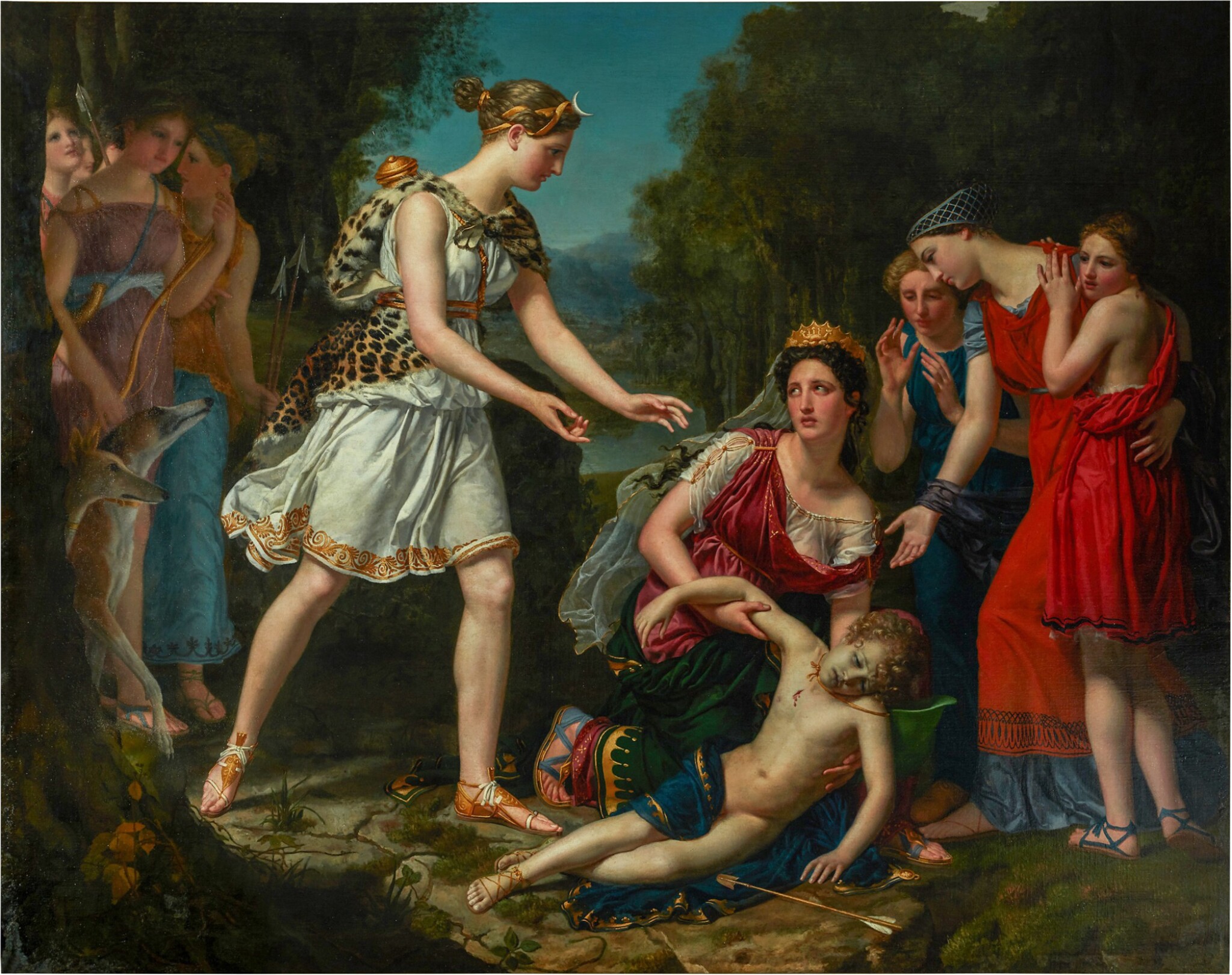 This grand mythological composition was painted by the young Sophie Frémiet Rude when she had just emerged from the studio of Jacques-Louis David to establish herself as an important history painter in her own right. The choice of a female-centric subject, depicting the moment just after the tragic death of the nymph Peirene's son, is a poignant one for a female artist and mother especially. In the story, Diana has been hunting in the forest when one of her arrows accidentally kills the young Cenchirias, whose father was Neptune; the tears of his mother Peirene formed a spring in Corinth, where a gate is named after Cenchirias. Rude's impressive, large-scale canvas was received with high praise when it was exhibited in the Ghent, Brussels and Haarlem Salons of 1823, 1824, and 1825 respectively, and today it is one of the great masterpieces by her remaining in private hands.

Sophie Frémiet studied initially with the founder of the Dijon School, François Devosge. She followed her family (staunch supporters of Napoleon) into exile in Brussels in 1815, and it was there that she became one of David's most prominent pupils. She was selected by David to make copies of two of his late masterpieces, Télémaque et Eucharis (J. Paul Getty Museum, Los Angeles) and Lacolére d'Achille (Kimbell Art Museum, Fort Worth). In 1821, she married the sculptor François Rude, with whom she collaborated on the decoration of the castle of Tervuren, a former summer residence of the Dukes of Brabant. Rude had broken with David by 1823 and was successfully teaching and exhibiting in Brussels on her own; eventually she and her husband settled in Paris, where she became a frequent exhibitor at the Salon, winning a second-class medal in 1833. Her husband would go on to participate in the relief carvings of the Arc de Triomphe in the early 1830s.

Begun in 1821 and completed in 1823,1 this grand and impressive canvas depicts the death of Cenchirias can be associated with the "picture with a mythological scenery" as described in L'Oracle when it was exhibited in Brussels in December 1823; following that, the painting went to Ghent where it won the artist a gold medal at an exhibition in February 1824, and then was exhibited the following year in Haarlem. Rude herself described the painting as "peut-etre l'un des ouvrages les plus importants pour moi" in order to establish herself as an independent artist.2

At the center of the composition, the nymph Peirene laments the death of her son Cenchirias, kneeling in sorrow and cradling his lifeless body. She looks up, eyes reddened with tears and cheeks flush, at the standing Diana, clad in a white hunting dress with a leopard-skin sash. Diana reaches down to Peirene tenderly to comfort the forlorn mother, though Rude has left some distance between them, as if Peirene is pulling away to avoid Diana's touch. Behind Diana is her entourage of huntresses and two dogs; to the right of Peirene are three others holding each other in sorrow. The arrow lies on the ground below, no longer penetrating Cenchirias's body but still pointing at the young boy. Rude has created a dynamic and colorful composition in what could have been a cold and harrowing moment: all of the figures are dressed in varying jewel tones, with Peirene in particularly elegant clothing full of gold embroidery.

Given the dating, it is clear that Rude had motherhood on her mind when she was painting this picture, perhaps one of the most tragic and moving stories on the subject. Rude began the work shortly after her 1821 marriage, when she was likely thinking about becoming a mother herself, and by the time she completed the painting she had given birth to her only child, Amédée. The weight of emotion and pain that Rude has conveyed on Peirene in the painting is evidence of her own embodiment of this devastating loss, which she would unfortunately experience herself in 1830.

1. The timeline of the painting can be identified based on the artist's letters to her friend Cécile Moyne describing the process; she first describes the choice of subject in a letter dated 29 December 1821 and finally tells her friend that she has completed the work in a letter dated 21 December 1823. Between these letters, she had to pause in the production of the painting not only for the birth of her daughter but also due to her work on the Tervuren commission, described above. See M. Geiger, under Literature, p. 62.