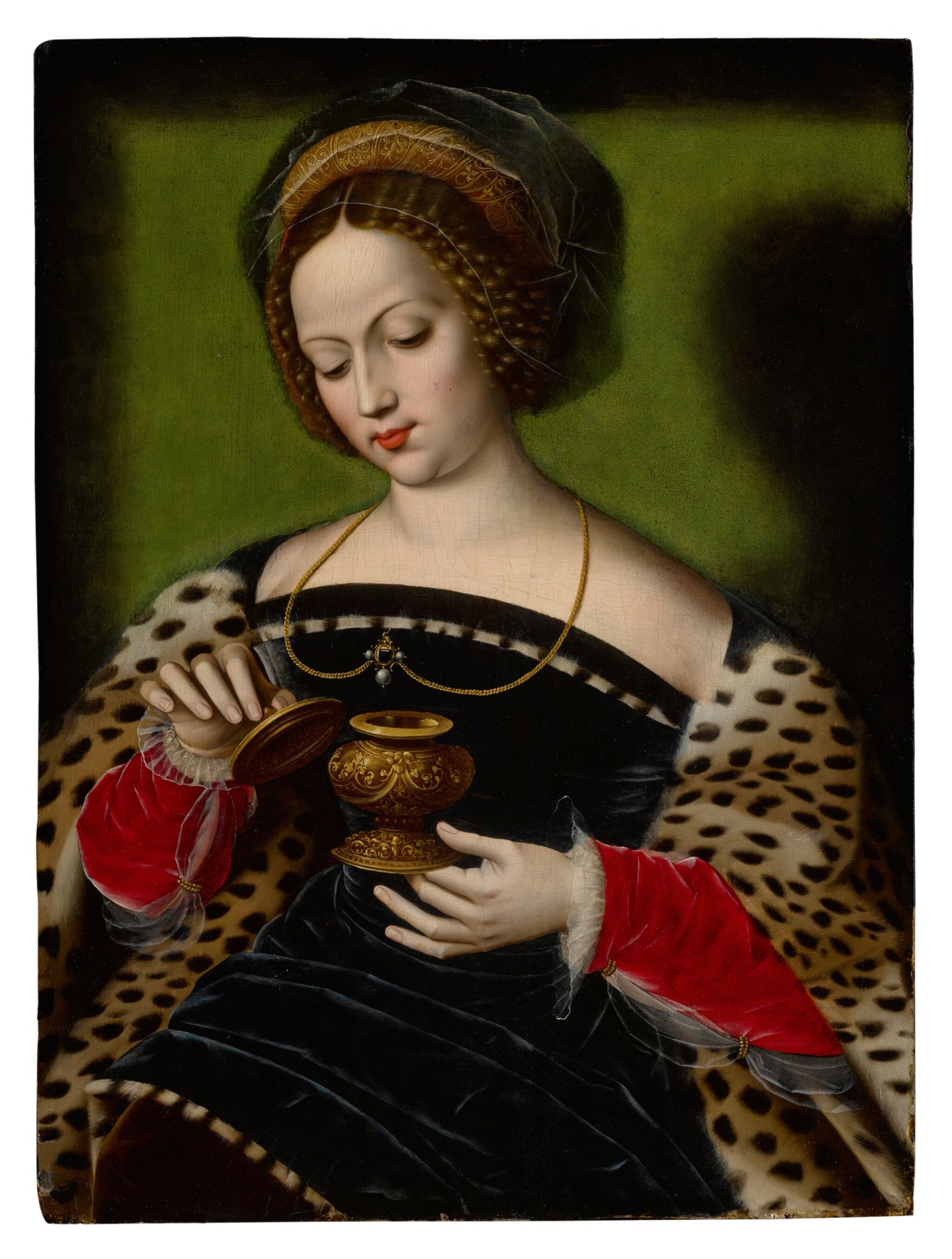 As Georges Marlier notes in his monograph devoted to Ambrosius Benson, the Magdalene in this attractive painting is more the elegant grand dame of her day than penitent saint. Her beautiful figure derives from one of the sibyls in Benson’s Deipara Virgo (Koninklijk Museum voor Schone Kunsten, Antwerp).1 The design was evidently very popular as Benson used it on several occasions as a single sibyl, or as the Magdalene, either holding an ointment jar, as in this painting, or reading. An important example of the latter type was sold London, Sotheby’s, 5 December 2018, lot 1. The versions that survive attest to the theme’s popularity around 1530. Benson was one of the most popular, and prolific, painters of the Renaissance in the north, successfully fusing the art of his north Italian origins with the precision and delicacy of his Netherlandish peers.

The present work relates most closely in physiognomy and attributes to a painting of the Magdalene holding an ointment jar in the Groeningemuseum, Bruges, which Friedländer lists as the first version of this compositional type. Friedländer lists four versions in total, with a third of comparable quality in Hampton Court. The beautifully refined spotted fur sleeves in the present composition are unique within this specific composition in which the Magdalene holds a jar of ointment, though is similarly found in the aforementioned Sotheby’s 2018 variant where she holds a book.

A comparison between this Magdalene, Benson’s sibyl in the Antwerp painting, and other images of the saint shows similarities in dress – notably the fur sleeves – as well as numerous differences. Most striking is the substitution of the headdress for the diaphanous confection worn by the Magdalene in the present work. Here, semi-transparent veils designed to off-set the fine detail of her hair and the effect of layered gauze are held in place by a gold-embroidered head band. Another distinctive feature of the work is the design of the jeweled brooch, with its prominent white pearls and large central stone, which differentiates it from other images of the Magdalene. For instance, the Bruges version features no pendant at all, but rather a more modest and simple gold necklace.

Benson developed his style in Bruges amidst a highly developed and collaborative artistic environment. Lombard in origin, he is recorded in Bruges as early as 1518, the year he entered Gerard David’s studio, which served as the training ground and source of inspiration for a plethora of painters who form part of a great generation of Bruges artists. In addition to his main competitor, Adriaen Isenbrandt, Benson rose to European prominence alongside several successful painters, including the miniaturist and illuminator Simon Bening, as well as Jan Provost, Albrecht Cornelis and Lancelot Blondeel, among others. In addition to the group of known artists, numerous others are known to have been active, a realization illustrated by the fact that from 1500 to 1523 (the year of David’s death), no less than sixty three people registered as free painters in the Bruges guild.2