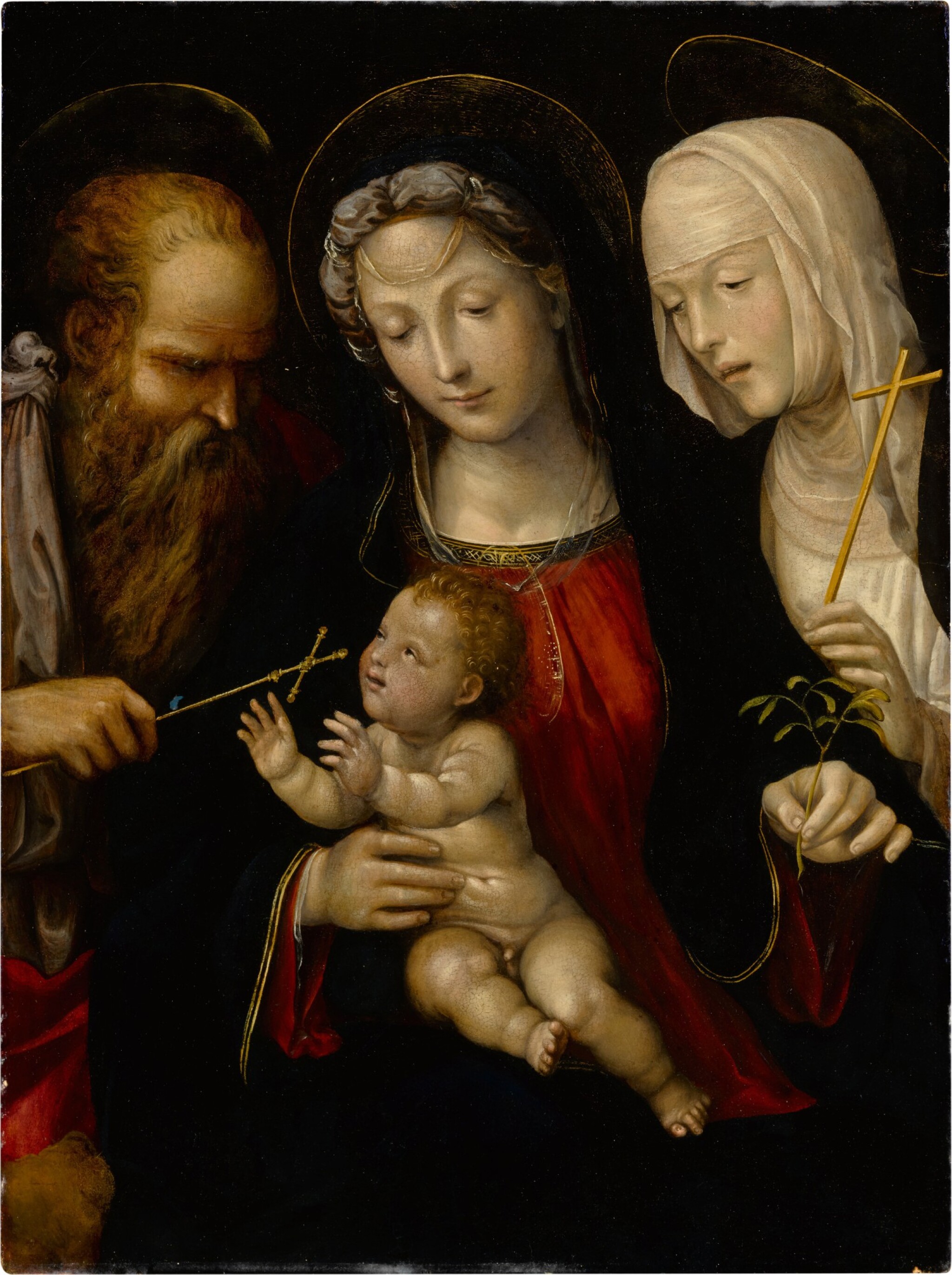 Probably, Piccolomini collection, Siena (according to the inscription on the reverse);

Acquired by the present owner circa 1980.

The preeminent artist in Siena in the opening years of the sixteenth century, Giovanni Antonio Bazzi, called Sodoma, was a painter of considerable versatility and inventiveness, producing altarpieces, allegories, pictures of mythological and classical subjects, important works in fresco for both secular and ecclesiastical patrons, and even paintings for funeral biers (testate di cataletti). In addition to his work in Siena, Sodoma spent time in Rome in 1508/09, decorating sections on the ceiling of the Stanza della Segnatura in the Vatican Palace and again in 1516, when he produced what is perhaps his most famous work, the frescoes of Scenes from the Life of Alexander the Great on the second floor of Agostino Chigi’s villa on the Tiber (later known as the Farnesina). His later years in Siena were occupied with numerous projects, and he remained the leading artistic figure in the city, rivaled in his last years only by Domenico Beccafumi.

This elegant Madonna and Child with Saints Jerome and Catherine of Siena exemplifies the type of painting that Sodoma produced for private devotion. Half-length sacre conversazioni were popular in Siena from the mid-15th century and in the present panel Sodoma continued that tradition in an updated form. The central figures of the Madonna and Child betray the artist’s awareness of both Leonardo and Raphael, the latter of whom he knew in Rome. The Madonna and Child are flanked by Saint Jerome, identifiable by the scarlet drapery and the snout of his lion at lower left, and by the plaintive figure of Saint Catherine of Siena at right. The dark background is used to strong effect, emphasizing the emotion of the scene, where the two saints hold out crosses to the still infant Christ.

The inclusion of Catherine of Siena would have especially appealed to a local audience. Indeed, the still legible but partially indistinct inscription written by brush in a seventeenth or eighteenth century hand on the reverse of the panel suggests its early Sienese provenance: Ope[ra] [d/]e Sodo[m/]A/ del..DIM[ORA?]/ PiCCOLOM[I]NI. Several branches of the Piccolomini family in Siena had works by Sodoma, although it is difficult to connect this panel to a specific family member.1

This painting should date to Sodoma’s maturity, circa 1530. The figural type of the Madonna and Child recalls that in the Adoration of the Magi commissioned by the Arduini family for the church of Sant’Agostino in Siena which was in situ before 1533.2 Certainly, the figure of Saint Catherine is reminiscent of the same saint and her fellow Dominican nuns in the frescoes painted by Sodoma in 1526 for the Chapel of Saint Catherine in the Basilica of San Domenico, Siena.

1. In an inventory made in 1678 after the death of Orazio Piccolomini, there is an entry for a “Madonna, Giesù, S.ta Cat.a et altro Santo di buonis.ma mano” with no attribution to an artist other than to note the quality. The measurements are given as “alto c.a un braccio la pittura e ¾ largo” which is rather smaller than the present panel, although throughout the inventory they appear to be rather approximate overall (hence the “circa” listed on most entries where measurements are given).