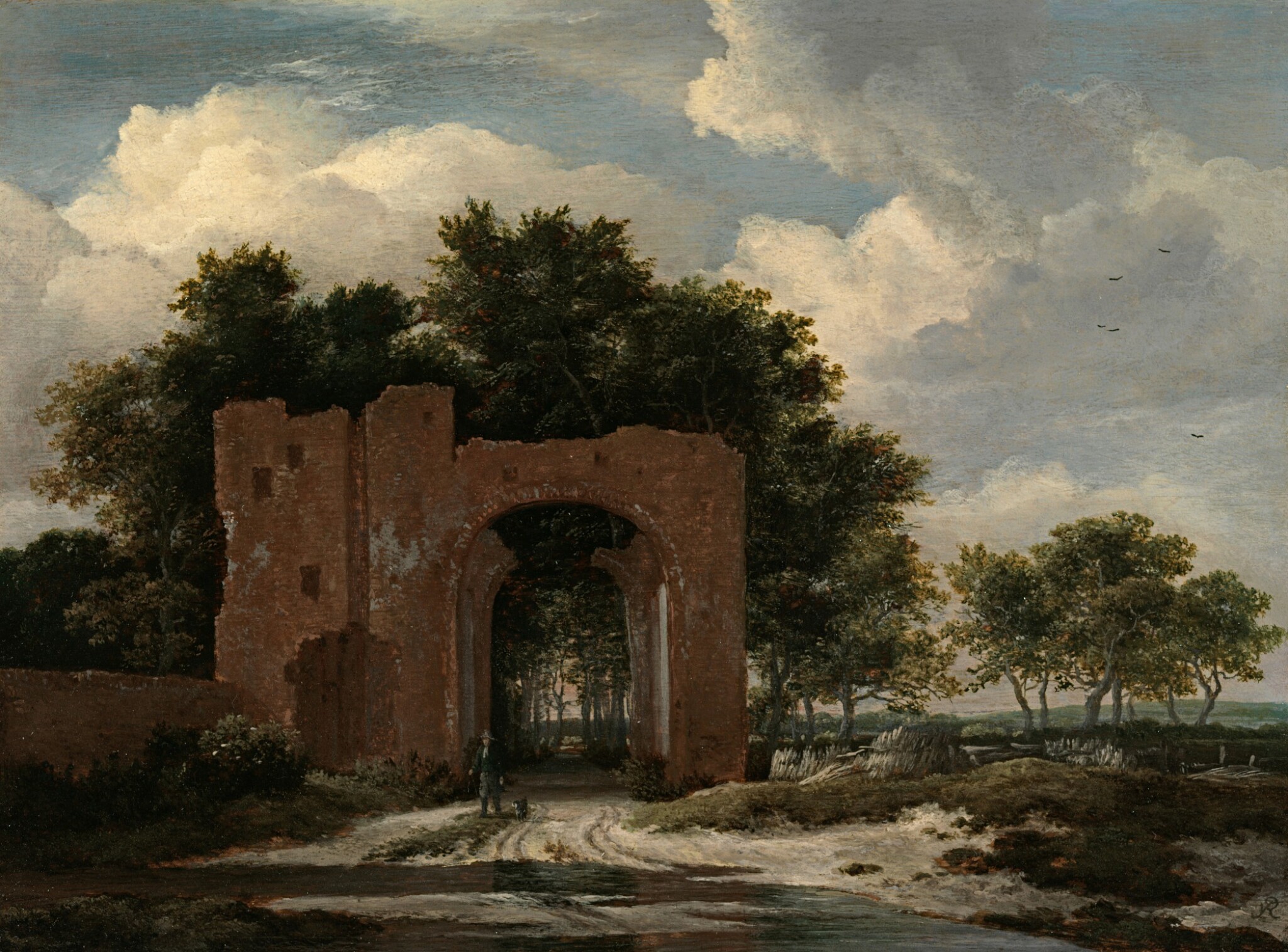 Jacob van Ruisdael, the nephew of Salomon van Ruysdael (after 1603-1670), was perhaps the most brilliant and versatile of Dutch landscape painters. He portrayed the gentle countryside around his home town of Haarlem, German hills, Norwegian waterfalls and haunting snowscapes, each work exquisitely attuned to the effects of climate and light.

The present painting was made in the first half of the 1650s, when Van Ruisdael was still living in his birthplace of Haarlem. Seymour Slive considers that it depicts the ruined gateway of the Huis ter Kleef, a castle north of Haarlem, by comparison with a drawing by Jan van de Velde of circa 1618-20 (Teylers Museum, Haarlem) which shows the gate from the opposite direction.1 Huis ter Kleef was the headquarters of Don Frederick de Toledo, son of the infamous Duke of Alba, instrument of Spanish repression in the Eighty Years’ War. Don Frederick captured Haarlem after a fierce seven-month siege in 1572-3. The castle was destroyed in 1573 and only partly rebuilt in 1634. Van Ruisdael painted a superb panoramic view of the ruin with Haarlem beyond in the second half of the 1670s (Musée Jacquemart-André, Paris).2

Even when working on a comparatively small scale, as here, there is a monumentality and poetry to Van Ruisdael’s paintings. The ruined gateway is haloed by shadowed trees, which in turn are surmounted by brisk white cumulus clouds, tearing off to reveal patches of blue sky. Van Ruisdael worked from the background forwards, with successive applications of paint from dark to light, leaving the highlights and staffage until last. The shapes and shifting colors of the trees, particularly the light filtering through the group of trees to the right, are described with extraordinary sensitivity and realism. A solitary figure is framed in the arch, walking along the lonely track. The ruin seems to be a poignant reminder of the Dutch struggle for independence, finally achieved only a few years before this picture was painted, by the 1648 Peace of Westphalia. It may also serve as a comment on the futility of all human ambition, as the severe lines of the gateway soften and crumble back gently into the embrace of the natural world which surrounds it.

The collection formed by Sir Francis Cook, 1st Bt., Visconde de Monserrate (1817-1901) was one of the finest of the nineteenth century. Francis Cook entered the textile firm founded by his father after travelling in the Near East and Europe. In 1849 he bought Doughty House on Richmond Hill and in 1855 the quinta of Monserrate near Cintra, where he built a Moorish-style palace. From 1869 Francis was head of Cook, Son, & Co. which traded finished silk, linen, wool and cotton all over Britain and the colonies. Reputed to be one of the three richest men in England, Cook was created a Baronet in 1886, a year after he married (as his second wife) Tennessee Claflin, former clairvoyant, stockbroker and firebrand American feminist.

In the late 1850s Cook began collecting classical sculpture, but owned no significant pictures until 1868, when he began to be advised by Sir John Charles Robinson (1824-1913), ex-curator of the South Kensington Museum. By 1876 Cook owned 510 major works. His collection grew to include, among many other masterpieces, van Eyck’s Three Marys at the Sepulchre (Museum Boymans-van Beuningen, Rotterdam); Velásquez’s Old woman cooking eggs (National Gallery of Scotland, Edinburgh); Antonello da Messina’s Christ at the Column (Musée du Louvre, Paris), Clouet’s Portrait of a lady (National Gallery of Art, Washington DC) and Metsu’s Woman at her toilet (Norton Simon Foundation, Pasadena, CA). In 1885 a 125ft Long Gallery was added to Doughty House to display the burgeoning collection, which Cook generously made available to scholars.

Further important paintings were added by Sir Francis Cook’s grandson, Sir Herbert Cook, 3rd Bt. (1868-1939), notably Rembrandt’s Portrait of a boy (Norton Simon Foundation) and Titian’s Portrait of a lady (‘La Schiavona’) (National Gallery, London). The fortunes of Cook, Son, & Co. declined in the 1930s and forty Dutch pictures were bought by Katz of Dieren in 1939. More paintings were sold after Doughty House suffered bomb damage in 1944. Sir Francis Cook’s great-grandson, also Francis, the 4th Baronet (1907-1978) moved to Jersey around 1950 taking the nucleus of thirty paintings from the collection which had been reserved for him. Among them was Nicolas Maes’s Group portrait, the masterpiece of his later career.

We are grateful to John Somerville, Keeper of the Cook Collection Archive, for his assistance in the cataloguing of this lot