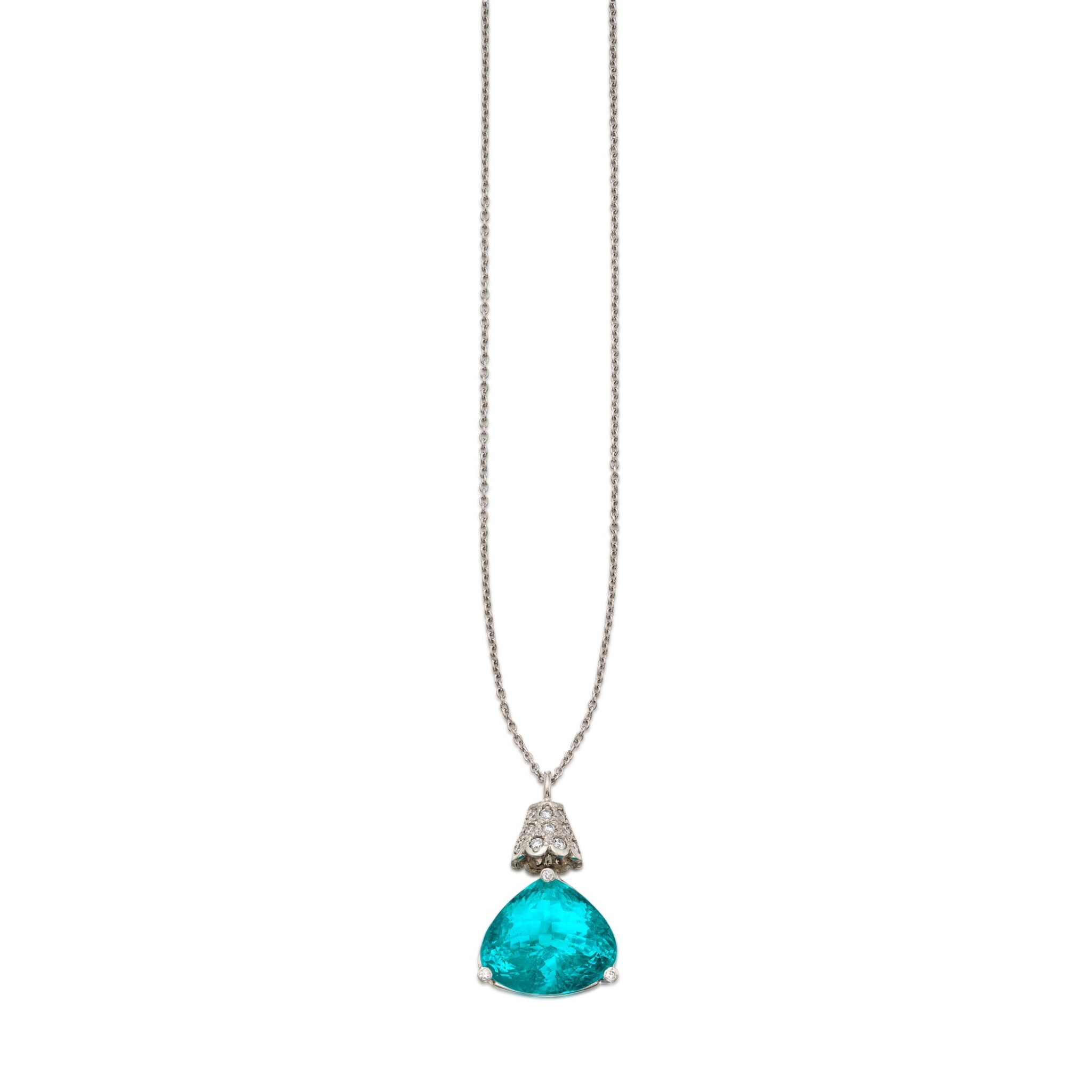 An Exceptional Tourmaline and Diamond Pendant-Necklace

Suspending a modified triangular brilliant-cut Paraiba tourmaline weighing 10.31 carats, capped and accented by round diamonds, length adjustable from 14 to 18 inches.

In very good condition. Clasp stamped PT950 for platinum, pendant tests as platinum. The Paraiba tourmaline is a vibrant medium, slightly greenish blue color, with strong saturation, loupe-clean, with moderate pleochroism. The diamonds, estimated to weigh a total of approximately 0.65 carat, are approximately F-G color, VS clarity. Accompanied by AGL report no. 1123064 dated April 27, 2022 stating that the Paraiba tourmaline is of Classic Brazilian origin, with low temperature heating. Accompanied by AGTA report no. 96013007 dated June 18, 2004 stating that the tourmaline is of Brazilian origin, with indications of heating.

Please note this lot is accompanied by Gübelin report no. 22052131 stating that the Paraiba tourmaline is of Brazilian origin, with undetermined treatment, together with an Information Sheet on Paraiba tourmalines and an Appendix attesting to this stone’s ‘exceptional rarities.’ Please note this lot is currently unmounted and will be remounted for the purchaser by Sotheby's following the auction.

Accompanied by AGL report no. 1123064 dated April 27, 2022 stating that the Paraiba tourmaline is of Classic Brazilian origin, with low temperature heating.

Accompanied by Gübelin report no. 22052131 dated June 2, 2022 stating that the Paraiba tourmaline is of Brazilian origin, with undetermined treatment, together with an Information Sheet on Paraiba tourmalines and an Appendix attesting to this stone’s ‘exceptional rarities.’

Accompanied by AGTA report no. 96013007 dated June 18, 2004 stating that the tourmaline is of Brazilian origin, with indications of heating.

Tourmaline, the most diverse of all gems, has an astonishing range of colors, but none more celebrated than the “electric” Paraiba variety. This type of elbaite is colored by a complex chemical interplay notably involving traces of copper. In rare cases, typically through gentle heating, vivid “neon” green-blues and blues are produced. Many who experience these exotic hues for the first time find it difficult to believe such shocking, vibrant colors are possible in a natural stone.

Discovered in the late 1980s in São José da Batalha in the Brazilian state of Paraíba, this novelty gem was introduced at the 1990 Tucson gem and mineral show. The initial surprise over the unprecedented colors quickly turned into soaring demand and historic values for tourmaline over a short four-day period, cementing a trend that has kept a furious pace ever since. Subsequent exploration yielded small additional Brazilian deposits in the Rio Grande do Norte as well as two African finds, in Nigeria (2001) and later in Mozambique (2005). These mines produced prized Paraiba examples, but it is undeniable that the scarce few exceptional gems mined from the now exhausted original Brazilian sources remain most coveted by connoisseurs.

The present lot is an example of exceptional size and color sourced from the Brazilian finds. Weighing over 10 carats, its vivid saturation and open tone combines a pleasing hint of green to the dominant blue hue. Unlike the vast majority of Brazilian Paraiba which have transparency issues, this stone adds to its distinction with an extraordinary clarity. It is a true gem worthy of the finest collections.