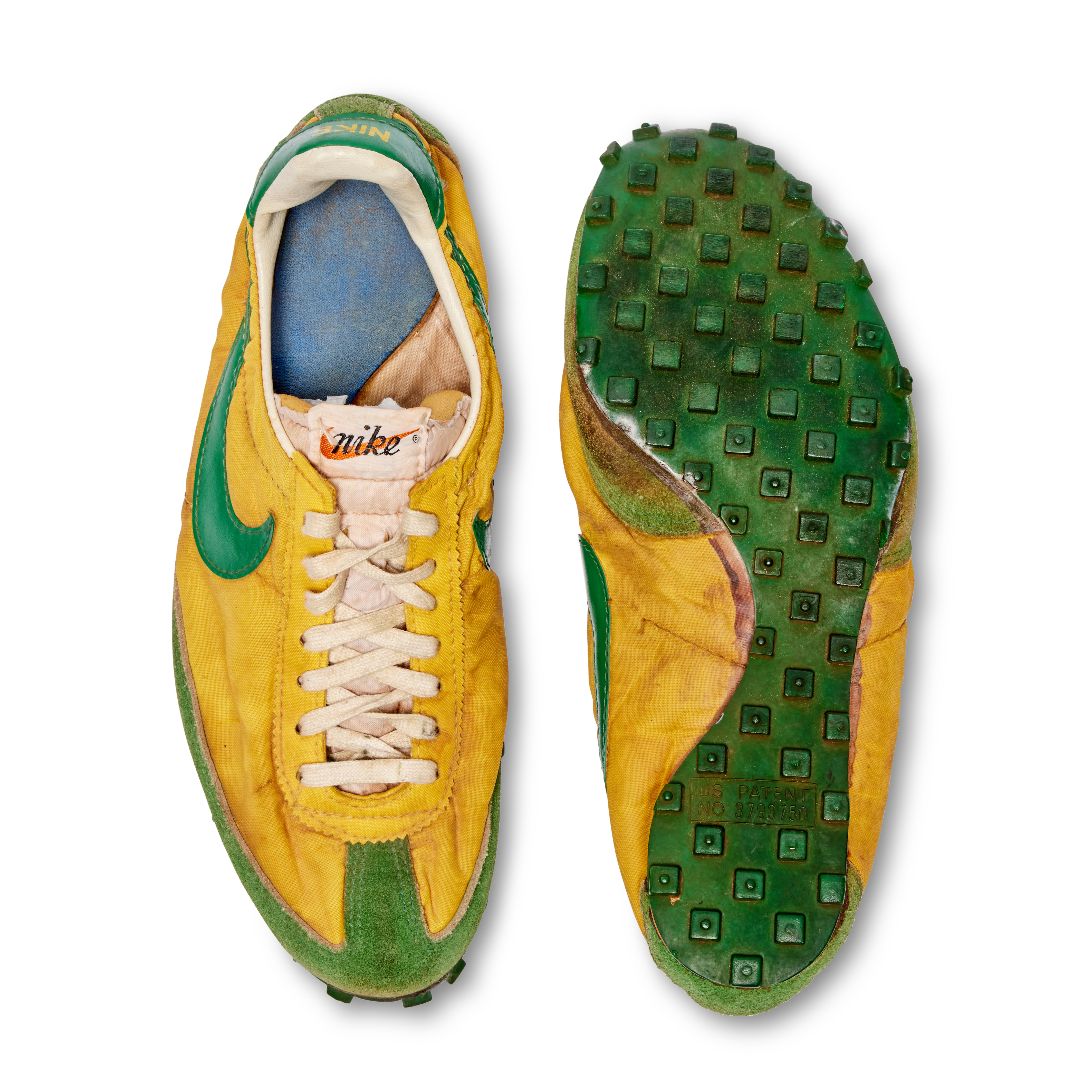 The shoes show signs of wear consistent with use. The Nike tongue tag of the left shoe has been removed. For a more detailed condition report please email Brahm.wachter@sothebys.com.

Steve Prefontaine, universally known as ‘Pre’, was a running prodigy.

Born in Coos Bay, Oregon, in 1951, Pre developed his passion for running and his hunger to be the best in the world at Marshfield High School. In 1965, when he started high school, he joined the Cross Country Team where he was coached by Walt McClure. After failing to qualify for the Oregon State Track Meet as a Sophomore, Pre vowed to never lose a high school race again and that is exactly what he did. Pre went undefeated in his final two years of high school. During his senior year, he set a national record when he ran 2 miles in 8:41.5.

He quickly became well known throughout the running community and was heavily recruited by colleges across America. University of Oregon Track Coach and Nike co-founder, Bill Bowerman, sent Pre a letter saying that he was certain he would become the world’s greatest distance runner if he decided to run at Oregon. Pre chose U of O.

In a short amount of time following his decision to run for Oregon, Steve would become a national sensation and inspiration to countless runners. In a tragedy that shocked the world and countless fans, Pre died in an automobile accident at just 24 years old. He has been referred to by Phil Knight, Nike Co-Founder as the “soul of Nike.”

This pair of Oregon Waffle sneakers in a size 9.5 was worn and owned by Steve Prefontaine and include the original laces and original blue insoles. The sneaker is finished in a nylon upper in the University of Oregon’s signature yellow and green colorway.

These Oregon Waffles are the first pair of Pre’s shoes to ever be publicly sold, which is particularly notable considering the lasting impact he had on one of the most iconic sneaker companies in the world: Nike.

Steve Prefontaine was the first runner signed by Nike and jump-started the brand as a running shoe company. In addition to being paid to wear Nike shoes, Pre was also named Nike’s National Director of Public Affairs and frequently wrote letters and sent Nike shoes to up-and-coming runners. The brand holds Pre in the highest regard with Phil Knight even professing his spirit as the “cornerstone of this company’s soul”.

Steve Prefontaine Hall is the first building at the main entrance to Nike World Headquarters. Inside there is a statue of Pre along with a museum that pays tribute to Bill Bowerman, Phil Knight, Steve Prefontaine, and the beginning of Nike.

The Oregon Waffle is one of just five shoes on view in the main display honoring Pre at Nike World Headquarters.

Pre’s national reputation grew his freshman year when he appeared on the covers of Track and Field News and Sports Illustrated. The Sports Illustrated cover referred to him as “America’s Distance Prodigy.” While training under Bowerman and Assistant Coach Bill Dellinger, Pre won seven NCAA titles - three in cross country and four in the ‘three mile’. He also broke his own or other American records 14 times. Truly dominant, Pre broke the 4-minute mile barrier nine times, ran twenty-five 2-mile races under 8:40, and on ten different occasions, recorded a time under 13:30 in 5,000-meter races. At the time of his death, Pre held every American distance running record from 2,000 to 10,000 meters.

Pre was unstoppable and the world of sports knew it. His hometown watched him grow into a bullet of a runner, breaking record after record nationwide. Nearly every Oregonian was emotionally invested in his triumph.

He famously said, “To give anything less than your best is to sacrifice the gift.”

In 1972, at the age of 21 and running against opponents two years his senior, Pre stepped onto the track of the Summer Olympics in Munich. Pre ran the 5000 meter, culminating the race with an impressive 4:04 time in his last mile.

Despite coming in fourth, many consider this to be the best race of his career, and an embodiment of the type of ‘all or nothing' runner that Pre was.

The Waffle Sole was the first major innovation at Nike. It was invented by Bill Bowerman when he was inspired by his wife’s Waffle Iron. One morning while eating waffles for breakfast, Bill looked at the waffle iron and envisioned using it to create soles for shoes. Bowerman poured rubber into the Waffle Iron in an attempt to create shoes that would have more grip, give runners more traction, and could be used on all surfaces.

THE NIKE NAME AND SWOOSH STRIPE ARE YOUR GUARANTEE OF QUALITY

In his final race, on May 29th, 1975, Pre won the 5000M at the University of Oregon’s Hayward Field. After the race, Pre took a victory lap as the fans in the stands cheered and clapped. Then he blew a kiss to the crowd and thanked them. That night, friends and family gathered at Geoff Hollister’s house to celebrate. At around midnight, Pre said his goodbyes and drove his friend, Frank Shorter, to Kenny Moore’s house in his gold MG convertible. On his way home, after dropping Frank off, his car swerved out of control on a narrow winding road and flipped over pinning him underneath it. Steve died on the scene. The next morning the news of Steve’s death shocked the world. He was just 24 years old.

Despite his life being tragically cut short, Pre’s influence on the sport of running is everlasting. He played a seminal role in kick-starting the American Running Boom and he helped make running cool. In 2018 Runner’s World referred to Pre as America’s most influential runner ever. Pre undeniably had a gift for running, but it was his drive and determination that made him a champion.

The Oregon Waffle is the first shoe with Waffle Soles that Nike mass produced and sold to the public and is designed after the prototype Moon Shoes. They are also the first Nike shoes to expressly list the Nike Waffle Patent Number, 3793750. The shoes are green and yellow which are the colors of the University of Oregon, where Nike began. The shoes were owned and worn by Steve Prefontaine. Pre was the first runner signed by Nike and these Oregon Waffles are the first pair of Pre’s shoes to ever be sold publicly.