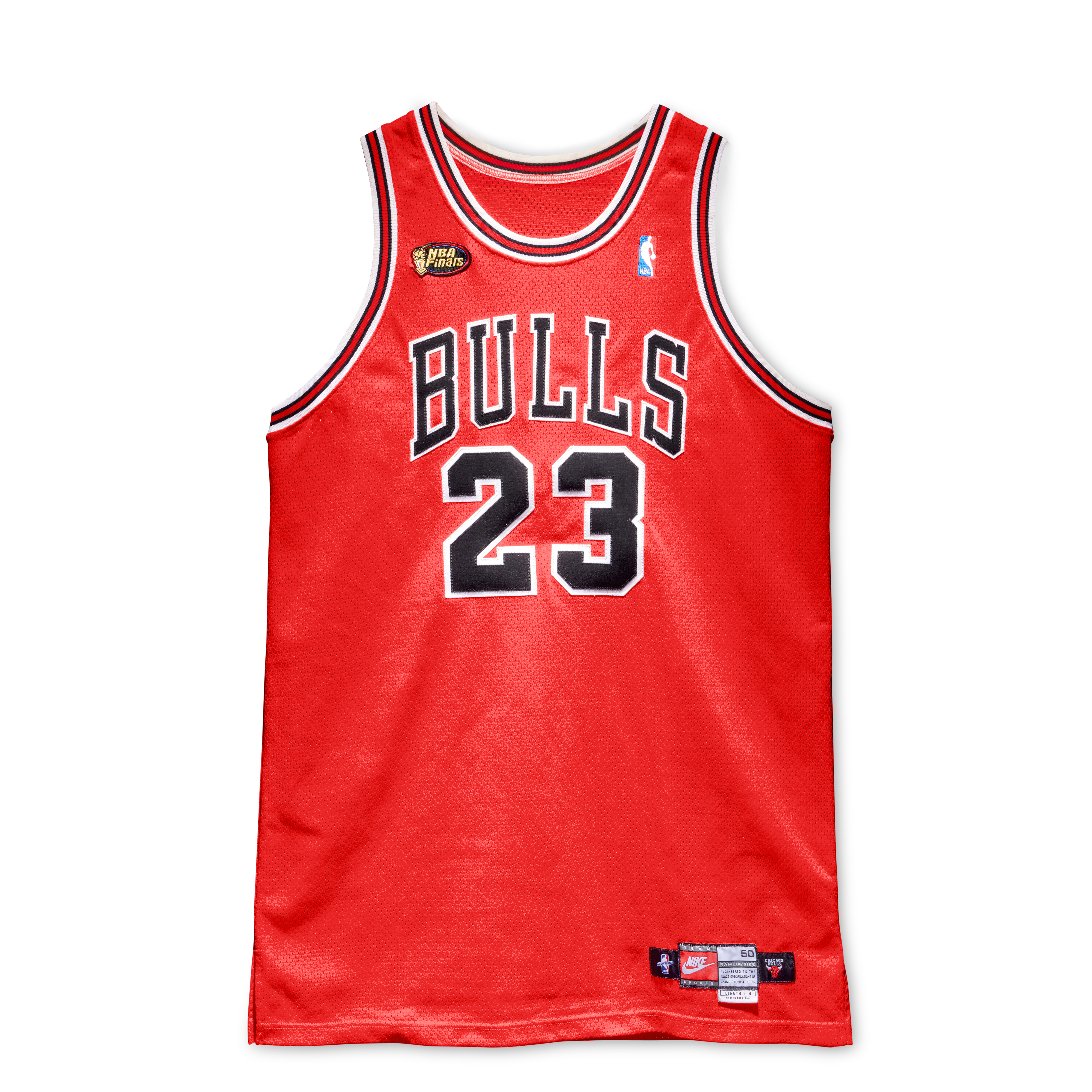 The jersey is in excellent condition consistent with use. For a more detailed condition report, please email brahm.wachter@sothebys.com.

In order to bid, clients will need to register with Sotheby’s first in advance of the close of the auction. Please reach out to brahm.wachter@sothebys.com to register.

The 1998 NBA Finals, of Michael Jordan’s “The Last Dance” season, was the most viewed of all NBA Finals contests. On June 3rd 1998 the world tuned-in to NBC to watch the Bulls arrive in Utah to an extremely hostile home crowd. In footage surrounding the game, Utah fans are seen driving a car with a Bull placed on a spit, as if it were being grilled. It was so contentious that Jordan’s children were forbidden by their mother from attending the game. Marcus Jordan (Michael’s son) explained, “She felt like Utah was a little hostile for us as young kids.” Jordan was seemingly unphased by the pressure of the situation, grooving on the bus to R&B singer Kenny Lattimore going into game one – just before he put on the present jersey. The scene has become one of the most iconic moments of The Last Dance, going viral and inspiring a host of memes.

Jordan would play 45 minutes in Game 1 – the most minutes on court of any of his 1998 NBA Finals games – and help send the game to overtime, registering 33 points in this iconic red away jersey on his way to his 6th NBA Championship and 6th Finals MVP award. Red is perhaps the more coveted color-way in terms of Jordan 1998 NBA Finals jerseys due to the celebrated imagery associated with the famous photo “The Last Shot.” This particular jersey was featured on the cover of Sports Illustrated following the NBA Finals (a graded copy is offered with this jersey). Additionally, it starred heavily in Episode X of ESPN’s The Last Dance. In making The Last Dance, the series editors focused predominantly on Game 1 and Game 6.

When it comes down to it, no one has ever been able to “be like Mike” as the famous 90s Gatorade commercials would acclaim. During his career Michael Jordan was able to achieve that which no other athlete since would accomplish, sometimes through feats and performances that almost seemed super-human. From the ‘Flu Game’ to the ‘Shrug Game’, Jordan was a player with no fear, no restrictions, and only pure confidence his abilities. He pushed the boundaries of what was possible – both for himself and for his teammates.

“The Last Dance” as it’s called, was Michael’s final season with the Chicago Bulls (1997-1998) and is perhaps the most beloved period in Jordan folklore, as Michael reached the apex of his popularity and powers while simultaneously conquering major internal divisions that were fracturing the team dynamics of the late 90s Chicago Bulls. The season is referred to as The Last Dance due in large part to the smash-hit ESPN documentary by the same name, which chronicled the Bulls efforts in the 1997-1998 season. The players were cognizant that the Bulls franchise would ultimately be disbanded at the end of the season and as such, knew it was their final opportunity to capture a 6th Bulls Championship. The Last Dance was Michael Jordan’s ‘magnum opus’ as an athlete – a testament to him as a competitor, a sportsman, a teammate, and ultimately, a champion.

For a host of reasons, NBA Finals jerseys are incredibly scant from Jordan and as such they are regarded with the highest levels of importance in the collecting community. In 2016, Michael Jordan donated $5M to the Smithsonian’s National Museum of African American History and Culture, and gave alongside it a 1996 NBA Finals Home jersey. Jordan Finals jerseys represent the apex of importance in terms of sports relics, a seldom seen but highly desired artifact from the zeniths of Jordan’s career.

Jordan as a Competitor

One element that stands out when watching footage of Jordan from this time was just how competitive of an athlete he really was. Vengeful as an opponent, and relentless as a teammate, his competitive drive both set him apart, an instilled a sense of fear among his colleagues. That competitive drive could not rest in Jordan, and he acknowledged it himself. In 1993 when a controversy arose around Michael’s gambling preferences (a controversy that has now been laid to rest), when asked if he had a gambling problem, Jordan replied simply, “No, because I can stop gambling. I have a competition problem, a competitive problem.”

Perhaps it was true. Never before has an athlete so embodied the spirit of a champion than in Michael Jordan. Fierce, competitive, unforgiving, and ultimately a winner — Jordan exemplifies the spirit of competition, and of winning at all costs.

One of the more notable story lines throughout his career was that adversity did not seem to have the same effect on Jordan than it did others. While some might let a loss, trash talk, or simply bad manners get in their head – Jordan would, very much consciously, use these slights as ammunition, akin to pouring gasoline on a fire. When The Last Dance premiered, viral memes started popping up around Jordan ‘taking it personally’, a reference to the several times in the show that Jordan seemed to take even the smallest affronts to heart, using them as fodder to torch his competition. The trend went so far as to garner a feature on the popular night-time television sketch snow, Saturday Night Live.

There was no love lost between Michael Jordan and Chicago Bulls General Manager Jerry Krause. Jerry – who had an undeniable talent for picking winning teams and players – did not get along with the key people that made the Chicago Bulls so dangerous: Michael Jordan, Scottie Pippen and Phil Jackson. This division ultimately hit a breaking point when Krause mandated that Phil Jackson’s last season with the Bulls would be the 1997-1998 season. As Jordan refused to play for anyone but Jackson, Krause’s move ultimately broke apart the dynasty winning Bulls, and imbued the 1997-1998 season with a sense of finality and urgency.

Jackson recalled being told the news: “Jerry called me into his office and said, 'This is going to be your last year, I don't care if you win 82 games in a row, this will be your last year here'.”

"So I said, 'Fine' and walked out of the room, and that was the only words that were exchanged."

Mr. Krause said many things surrounding the 1997-1998 season, among the most disturbing to Jordan specifically was that the team needed to be “rebuilt” and that, “Players don't win championships, organizations do.” A quote Krause later refuted.

In Michael Jordan’s Hall of Fame Enshrinement Speech more than 10 years later in 2009, Jordan still seemed irked by Jerry’s words stating, “I don’t know who invited him. I didn’t… he said organizations win championships. I said I didn’t see organizations playing with the Flu in Utah. I didn’t seem them playing – you know – with a bad ankle.”

Ultimately, perhaps the tension within the team and the adversity Jordan faced pushed him even further – as it was known to do for Jordan – to his sixth NBA championship with the Chicago Bulls.

The jersey is accompanied by a photomatching certificate from The MeiGray Group in regards to the game use. It additionally comes with a graded copy of a June 1998 Sports Illustrated, which features this jersey on the cover.