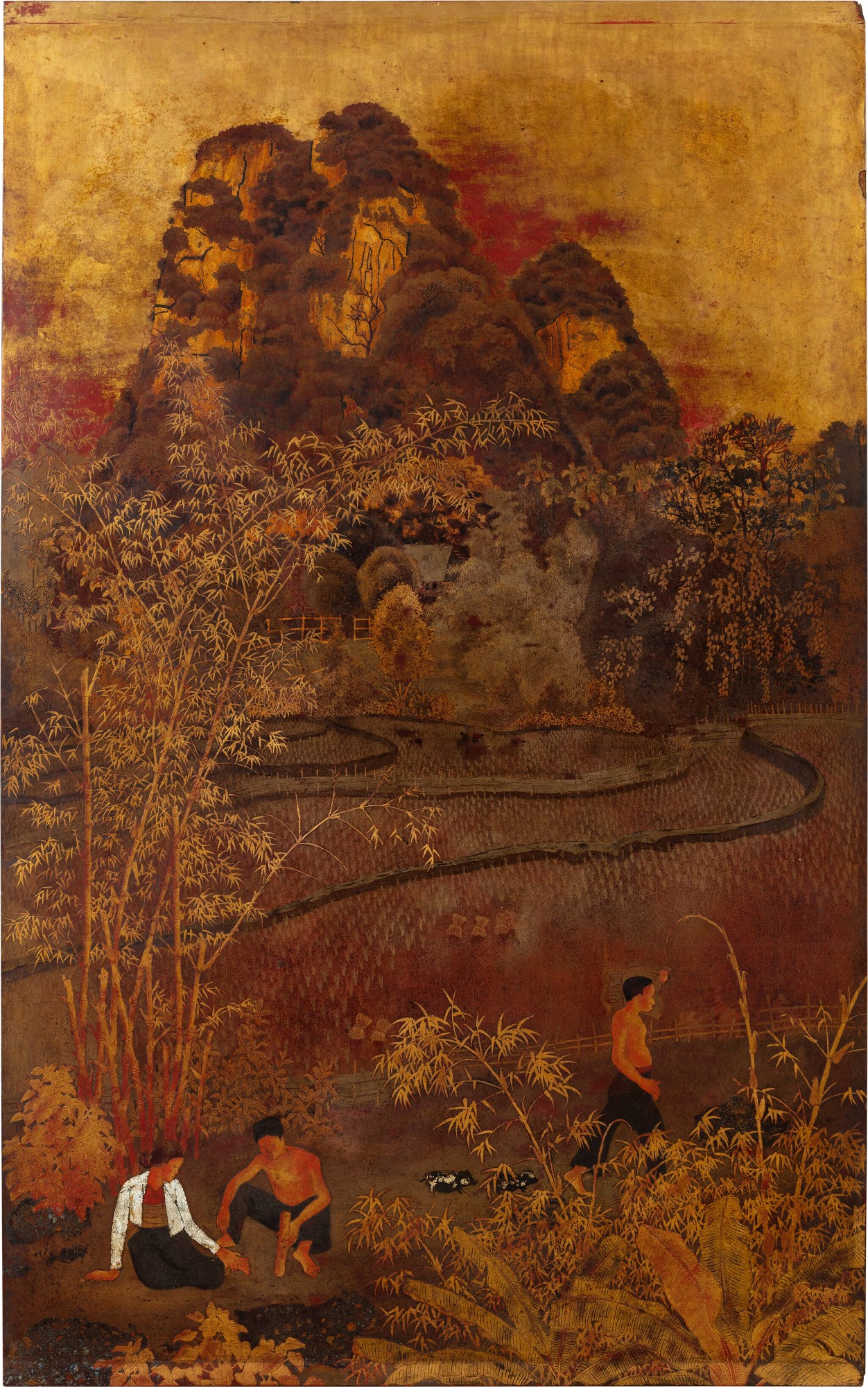 There is some light wear and scratches to the surface and to the gilding. There is is evidence of wear along the edges of the work due to frame abrasions, with some losses of wood. Examination under ultraviolet light reveals no sign of restoration.

Lacquer work is one of the oldest forms of craftsmanship in Asia, and it is a medium that is difficult to master. In the 1930s, Joseph Inguimberty, who was professor at the École des beaux-arts d’Indochine, opened a lacquer workshop. He encouraged his students to combine the vision of Western modern painting with Asian techniques. Lacquer work thus took on a new dimension at a time when Vietnamese art was at its golden age (1930-1945).

Landscape in Northern Vietnam is not signed, which was often the case of works that were exhibited each year at the École des beaux-arts d’Indochine. It is either a collective work by student-artists or a composition based on the works of their mentors. This work reflects the technique and graphic design that are so distinctive of this movement of the 1930s to 1940s. Likewise, the colour range and use of chiaroscuro to juxtapose dark zones with bright gold can be compared to the shimmering style of works by Nguyễn Văn Tỵ, Hoàng Tích Chù, or Nguyễn Tiến Chung. These three artists, who were students at the École des Beaux-Arts d’Indochine, were the principal initiators of a modern change of direction in traditional Vietnamese lacquer painting.

Landscape in Northern Vietnam portrays a peaceful landscape in which three farmers recline in their fields near the rice fields. The lush vegetation nearly conceals a house at the foot of the mountain in the background, while the viewer’s eye is drawn to the profusion of golden leaves in the foreground. In juxtaposition with the dark, massive mountain, the delicate golden leaves, the subtle rendering of the rice fields and foliage, and the harmonious incorporation of human figures all bring a feeling of balance to the composition. The scene remains suspended in an undisturbed instant of serenity and peace that one would be reluctant to upset, transporting us to the poetic, idealized Asian unity between man and nature. Majestic and subtle, this work is a true testimonial to a perfect mastery of the lacquer technique.