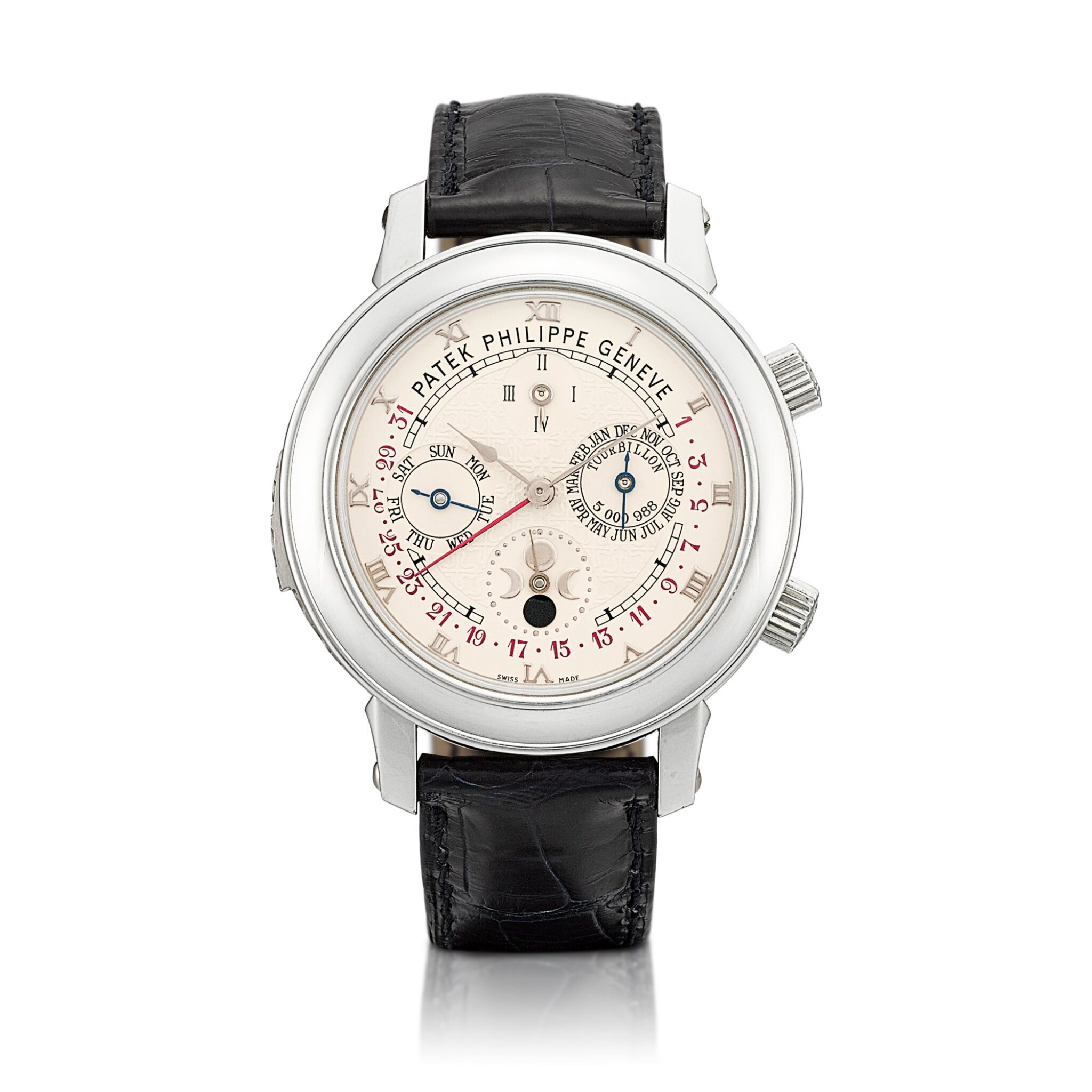 The movement is in working condition. The minute repeating on cathedral gongs is in phase and strikes with an exceptional tune and clarity. The perpetual calendar is working properly. All functions are working correctly. The watch is in excellent overall condition with only light signs of surface wear to the case. The buckle in very good overall condition with minor wear only. The present watch is exceptional in every way.

Please note that the movement has not been tested for the accuracy of time and may need a service at the buyer's expense. Sotheby's does not guarantee the future working of the movement and we do not guarantee the authenticity of any individual component parts since subsequent repairs and restoration work may have resulted in the replacement of original parts. You are advised that watch straps or bands made of materials derived from endangered or otherwise protected species (i.e. alligator or crocodile) are not sold with the watch and we reserve the right to remove these straps or bands prior to shipping. Furthermore, the watch may not come with its original manufacturers strap or band.

Ever since the first wristwatch created, Patek Philippe had their vision to produce the best watches in showcasing craftsmanship, while combining creative yet practical complications into a movement. Widely acknowledged as the pinnacle of complications, the Sky Moon Tourbillon reference 5002 is an unprecedented piece of artwork created by the Maison and by far one of the greatest wristwatches manufactured in the 21st century. Inspired by the Star Calibre 2000 pocket watch and introduced only 6 months after in 2001, it was Patek Philippe’s first double-faced wristwatch and features twelve admirable complications.

Being the world’s most complicated wristwatch at the time of its launch, the biggest challenge to the Sky Moon’s development would be to incorporate its movement of 694 parts into the small cavity of a wristwatch. Perfectly achieved by Patek Philippe, the 43.5 mm case houses a tourbillon and a minute repeater with cathedral gongs, alongside the perpetual calendar with retrograde date remarkably displayed on the front dial. As in true Patek Philippe fashion, the tourbillon is concealed within the movement. It is believed this aligns with Patek Philippe’s philosophy of beauty, avoiding the tourbillon from obstructing the beauty of the dial. Furthermore, its minute repeater is not just any regular repeater, but a cathedral gong that circulates the movement twice. It chimes the correct time in a deep and enhanced tone, a sensational feat that is certain to capture a collector’s heart. The perpetual calendar on the other hand operates as accurately as a micro-computer, given the consistency of winding power, it has the ability to calculate the correct date up to hundreds of years. Essentially, the watch can tell how many days are in each month, even within the February of a leap year. The perpetual calendar works in conjunction with the retrograde date on an arc shaped display, moving at one increment per day and automatically flies back towards the beginning at the end of the month. Just like the rest of its sophisticated complications, the retrograde date’s mechanism is very delicate as well, featuring a patented ratchet wheel mechanism with the highest degree of hand positioning accuracy.

Turning to the back of the dial, a magnificent blue northern sky chart pops right in front of the eyes. Not only displaying angular progression and the phases of the moon, the sidereal time based on the Earth’s rotation is also shown with clarity. Under the sapphire case back, the canopy of the northern hemisphere rotates counterclockwise with the passage of time, showcasing the celestial motions. The astronomical highlight adds a level of romance to the watch and pays homage to the origin and quintessence of timekeeping. Combining the level of accuracy between the two sides of the movement, its sophistication would require many months to complete and is embossed by the Geneva Seal, just like all other Patek Philippe tourbillon pieces from this era.

With extreme rarity, only two pieces were produced annually, and they are only reserved for the most important clients of Patek Philippe. The collector must also pass an interview in order to enter the extensive waiting list of this gorgeous timepiece. Highly sought-after, the Sky Moon Tourbillon 5002 paved the way of ultra-complicated wristwatches and will remain a mythical timepiece years to come.

Aside from its powerful complications, The Sky Moon Tourbillon is an extraordinary marvel to look at. The same level of dedication would be given to its design elements, as well as case making. Upon close inspection, one would notice the opaline white dial to be embossed with the Calatrava cross guilloché pattern, enhanced with red accents on the retrograde date giving the dial a very sophisticated look. The case on the other hand is forged from the most noble metal platinum, along with very interesting engraving on the case. Decorated with halved Calatrava crosses, this pattern travels not only to the case band, but to the repeater slide piece and even between the lugs. The crown at 4 o’clock is to be used to set the time and wind the watch like any regular watch, while the crown at 2 o’clock has a special use for the dial on the case back. It can correct the sky chart and sidereal time from one direction, as well as the position of the moon display while turning towards the other direction.

The tremendous achievements of the reference 5002 would be inherited by the reference 6002, launched in 2013. The case of the reference 6002 is redesigned with relief engraving, giving the watch a very contemporary look. Never to be forgotten, this important legacy of Patek Philippe watchmaking will continue to pass on for generations.