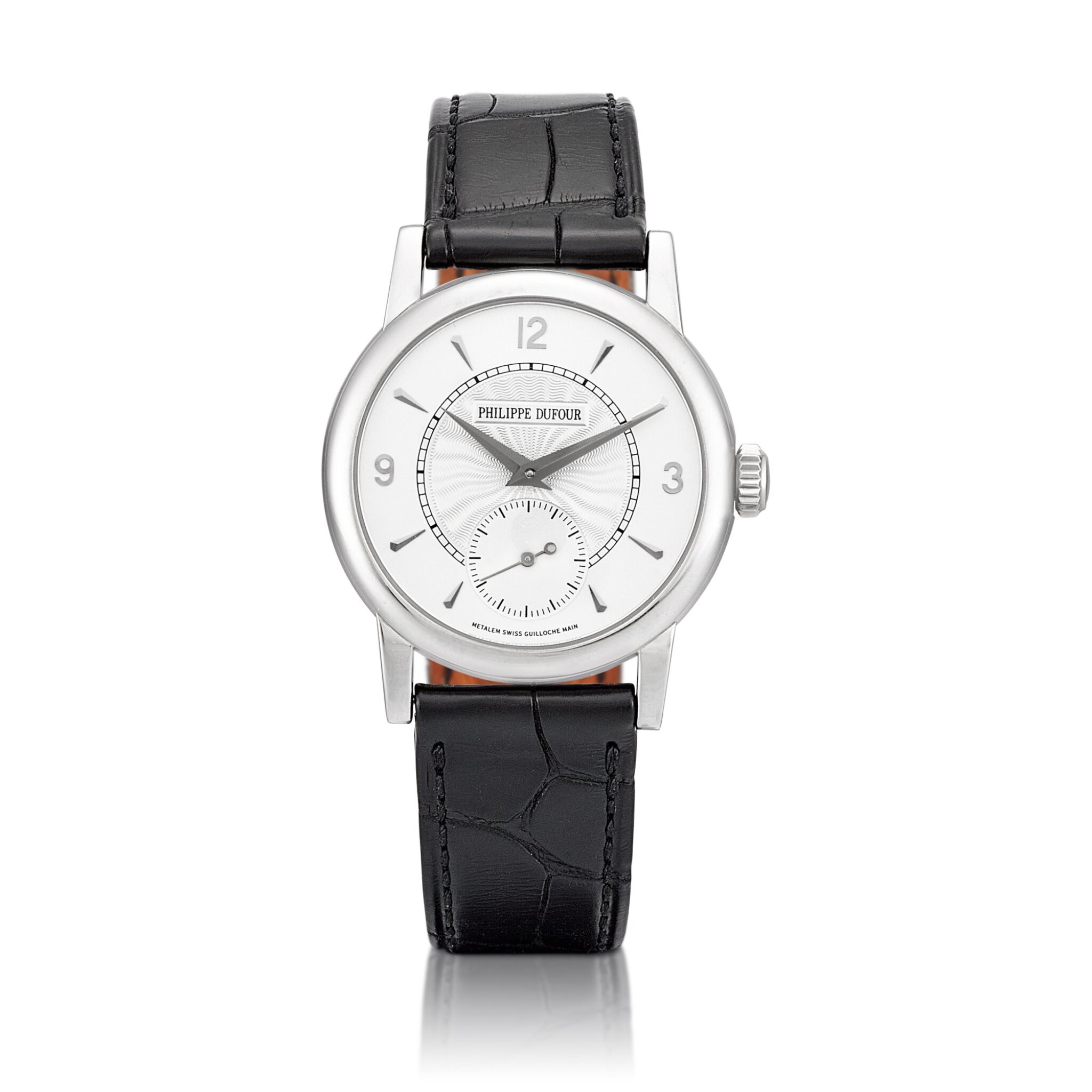 A white gold wristwatch, Made in 2011

Please note that the movement has not been tested for the accuracy of time and may need a service at the buyer's expense. Sotheby's does not guarantee the future working of the movement and we do not guarantee the authenticity of any individual component parts since subsequent repairs and restoration work may have resulted in the replacement of original parts. You are advised that watch straps or bands made of materials derived from endangered or otherwise protected species (i.e. alligator or crocodile) are not sold with the watch and we reserve the right to remove these straps or bands prior to shipping. Furthermore, the watch may not come with its original manufacturers strap or band.

Arguably one of the most influential independent watchmakers the world of horology has ever seen, Philippe Dufour is a living legend, known for his exquisite craftmanship applied to handmaking his watches from start to finish. He even goes as far as to collecting wood from a plant that grows near his workshop for the final stages of polishing.

Dufour was born in 1948 in Le Sentier, the Vallée de Joux, to parents who were both watchmakers. Upon graduating from the Ecole d’Horlogerie in the Joux Valley in 1967, he found work at renowned manufactures before moving his focus on to restoring antique and vintage timepieces. Through years of restoring these watches, Dufour became fascinated by the incredibly sophisticated complications hidden under the dial. Fueled by inspiration and curiosity, he decided to devote himself to the most impressive and challenging of them all, the Grande Sonnerie.

Through painstakingly hard work, dedication, and a set of old tools from the 1900s, Dufour created a Grande Sonnerie minute repeating pocket watch movement, each of which took 2000 hours of work. Following this achievement, he began the journey to launch his own eponymous brand and put his innate talent and eye for perfection to work. All while honoring the traditional techniques and processes of horology, and the Vallée de Joux, his birthplace which inspired it all. After two and a half years of perseverance, Philippe Dufour created the world’s first Grande Sonnerie minute repeating wristwatch which like all his creations, was obsessively perfected by hand. Along with his new brand, the masterpiece made its debut at Baselworld 1992.

To date, Dufour has only produced three series of models, the Grand Sonnerie, the Duality and the Simplicity shown in the present lot and viewed by many as his legacy. While he has spent most of his life working independently, he has recently started working with daughter Daniela Dufour, passing on his traditional ways of craftsmanship to a new generation of watchmakers.

While technology has given many manufacturers the ease and ability to produce in large quantities, Philippe Dufour prioritizes traditional watchmaking craftmanship and technique, hand finishing every component of his creations.

Introduced in 2000, the Simplicity was made to cater to legendary watchmaker Philip Dufour’s large and devoted following in Japan. Though the seemingly minimalistic timepiece only shows time, the Simplicity is prided on being a product of the utmost quality. With inspiration from traditional Vallée de Joux movements, Dufour makes use of traditional techniques in his craft and hand finishes each component to perfection, never to exclude subtle details such as the instantly recognizable Geneva stripes seen on the movement.

The present watch features a vintage looking 34 mm white gold case that surrounds a silvered sunburst finished dial with mesmerizing guilloché detailing. With approximately 12 watches made per year, he is focused on ensuring the exceptional quality of each watch. To date, under 250 Simplicity watches have been made in total with the present lot being number 167. A piece of horological history, this phenomenal timepiece would represent the pinnacle of success for watch lovers and collectors alike.