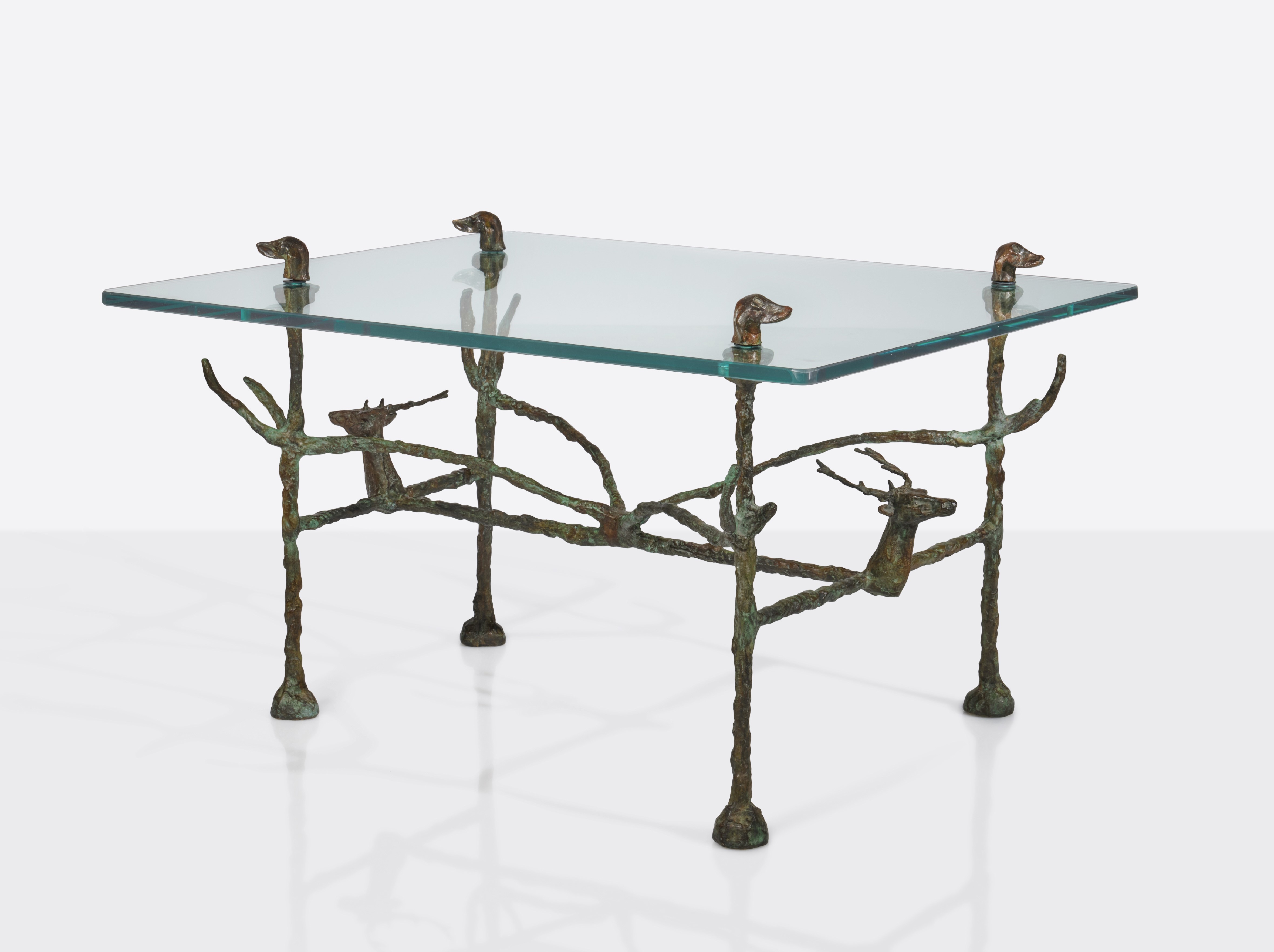 Overall in very good condition. When viewed firsthand, the patina presents with complex hues combining shades of dark russet brown and dark green which contribute to creating a highly dynamic surface and enhance the sculptural quality of the table. The bronze surfaces are in excellent condition overall with very minor irregularities and imperfections inherent to production and to the artist’s practice. The recessed areas with some extremely minimal soiling and oxidation, not visible unless closely inspected. The original glass is in excellent condition overall, with extremely faint scuffing throughout consistent with gentle use not visible unless closely inspected. A beautiful model by the Swiss artist in well-preserved condition, highly complementary of the following lot.

Acquired directly from the artist by the present owner, 1980
Diego Giacometti, exh. cat., The Greenberg Gallery, St. Louis and Marisa del Re Gallery, New York, 1985, p. 32
Michel Butor and Jean Vincent, Diego Giacometti, Paris, 1985, pp. 125 and 140
Daniel Marchesseau, Diego Giacometti, Paris, 1986, pp. 84-85
Françoise Francisci, Diego Giacometti, Catalogue de l'oeuvre, vol. I, Paris, 1986, pp. 106-107
Diego Giacometti found the animal kingdom to be an endless source of inspiration. Born in a rural alpine village in Switzerland, the designer was first introduced to the animals on his family’s farm as well as those local to the surrounding mountainous landscape. He developed a particular fondness for cats, which he kept as pets in the studio he shared with his brother Alberto in Paris. Diego anthropomorphized his cat in the sculpture Chat Maître d'Hôtel, where the cat stands on its hind legs and holds out a bowl, ready to serve. His cat figured prominently in Alberto’s oeuvre as well, serving as the subject of one of his most famous sculptures, Le Chat, in 1951. If there was any doubt as to their affection for the friendly felines, Alberto made it clear when stating, “In a fire, between a Rembrandt and a cat, I would save the cat.”

Over the course of his career, Diego Giacometti’s bestiary expanded to include more exotic species. In the case of his iconic L’Autruche, the artist captured the dynamic posture of an ostrich and even incorporated an ostrich egg between its wings. Beyond statuesque sculptures, Giacometti also designed functional furniture in which lions, birds, dogs and more were transformed into eye-catching decorative motifs in his preferred medium of bronze. For his trapezoidal low tables like the "Cerfs et Chiens" and "Hiboux et Grenouilles," Giacometti conceived of elegant animal pairings to achieve a balanced design. In lot 423, stag heads are mounted to the sinuous branches of the base while four dogs emerge from the tabletop as if on the hunt. In lot 424, small frogs sit near each corner of the tabletop while two owls perch observantly below. Giacometti also designed narrative scenes for the animals on his furniture, as in lot 422 the “Cerf et Renard” Console where a stag and fox approach one another beneath a tree. In all of these designs, each creature is rendered with great care and detail, demonstrating how Giacometti valued not only their physical attributes, but also their symbolic meanings.