Property from the Carlton and June Baxter Collection 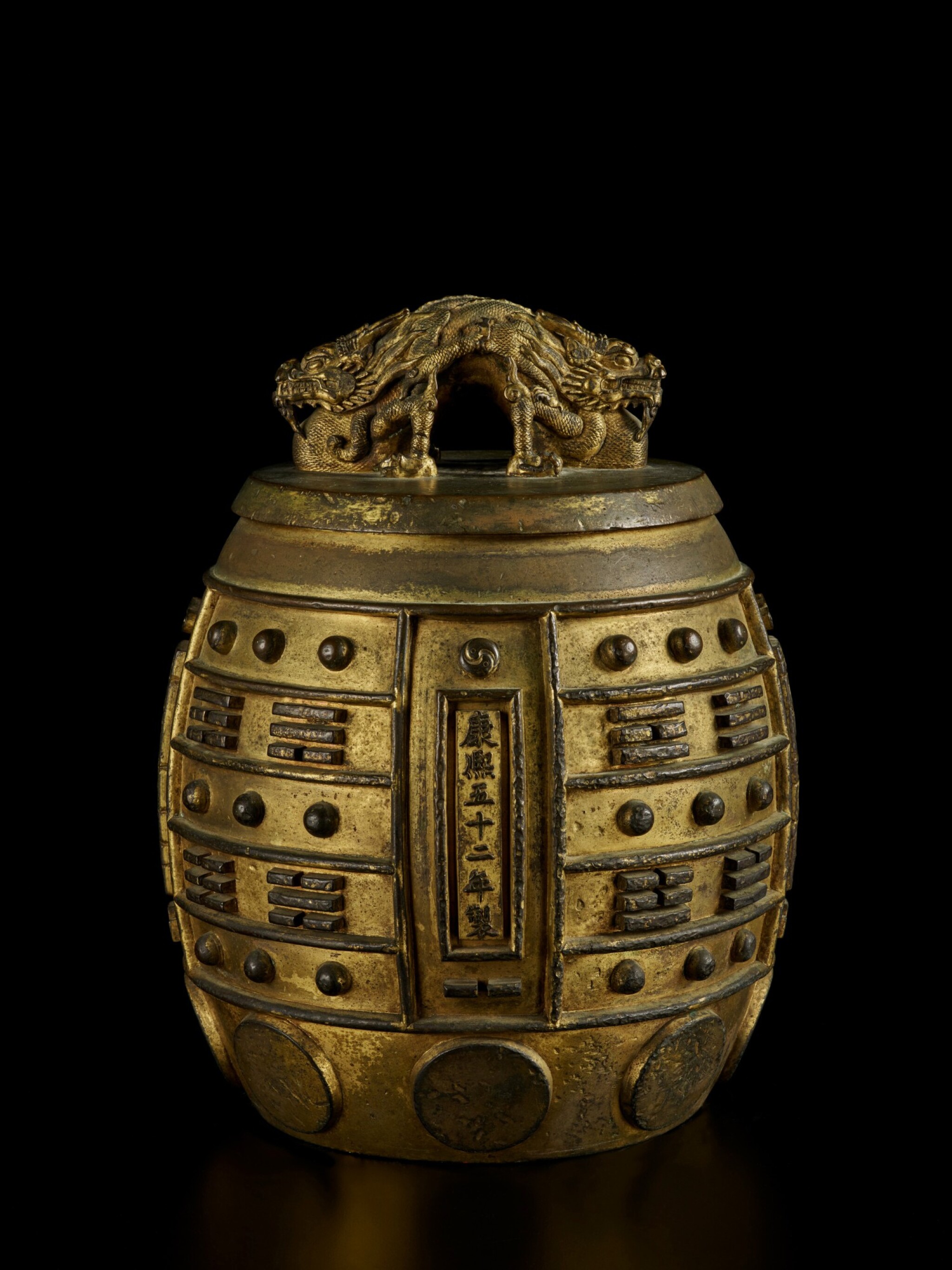 Property from the Carlton and June Baxter Collection

Mark and period of Kangxi, dated to the 52nd year, corresponding to 1713

Overall with wear to the gilding. Small dents, nicks and scratches to the surface as can be expected.

Gifted to the present owners in the 1970s.

Bianzhong were produced for the court during the Qing dynasty (1644-1911) as an essential component of Confucian ritual ceremonies at the imperial altars, formal banquets and processions. The music produced by these instruments was believed to facilitate communication between humans and deities. Gilt-bronze bells of this type were assembled in sets of sixteen and produced twelve musical tones, with four Bei tones repeated in a lower octave: Bei Yize, Bei Nanlu, Bei Wushe, Bei Yingzhong, Huangzhong, Dalu, Taicu, Jiazhong, Guxi, Zhonglu, Ruibin, Linzhong, Yize, Nanlu, Wushe, Yingzhong. These bells were attached to tall wooden frames in two rows of eight arranged from low to high octaves, with the yang tones on the upper rack and the yin on the lower rack. Giuseppe Castiglione (1688-1766) depicts such an arrangement of bells in his painting Imperial Banquet in Wanshu Garden (ca. 1755), included in the exhibition Splendors of China's Forbidden City. The Glorious Reign of Emperor Qianlong, The Field Museum, Chicago, 2004, cat. no. 101. Unlike archaic bells which ranged in size, Qing dynasty bells were cast in equal size but varied in thickness—the thicker the casting, the higher the tone of the bell. To ensure the exact pitch, these bronze cast bells were hand finished before gilding.

The present bell bears an inscription identifying it as Bei Yingzhong, from the 52nd year of the Kangxi Emperor’s reign, corresponding to 1713. Bells of this form, dated to different years of the Kangxi reign, are believed to have been created for the Temple of Agriculture in Beijing. A full carillon of bells with the same design and date is in the collection of the Palace Museum, Beijing, included in the exhibition La Cité interdite; Vie publique et privée des empereurs de Chine (1644-1911), Musée du Petit Palais, Paris, 1996, cat. no. 49. For similar bells sold at auction, see a set of five—Bei Nanlu, Ruibin, Linzhong, Wushe, and Yingzhong—formerly in the C. Ruxton and Audrey B. Love Collection and sold at Christie’s New York, 20th October 2004, lot 455; a Guxi bell sold in the same rooms, 30th November 1984, lot 554; a Taicu bell sold in our Hong Kong rooms, 4th October 2011, lot 1981, and another Wushe bell sold in the same rooms, 9th October 2007, lot 1327. See a further Ruibin bell sold in our London rooms, 5th November 2014, lot 16. For a Bei Yingzhong bell of the same design, but dated to the 54th year of Kangxi’s reign, compare one which was also from the C. Ruxton and Audrey B. Love Collection and sold in the same aforementioned sale, lot 456 (part lot).

The dragons surmounting this bell are known as pulao, which according to ancient Chinese legend is one of the nine sons of the dragon. The myth alleges that Pulao resided close to the shore while his archenemy, the whale, lived in the ocean. Whenever the whale would come to attack, Pulao would sound a roar. The structure of a bell is thus associated with this legend; the clash of the bell, Pulao, with the striker, the whale, would result in the dragon producing its loud ringing roar.