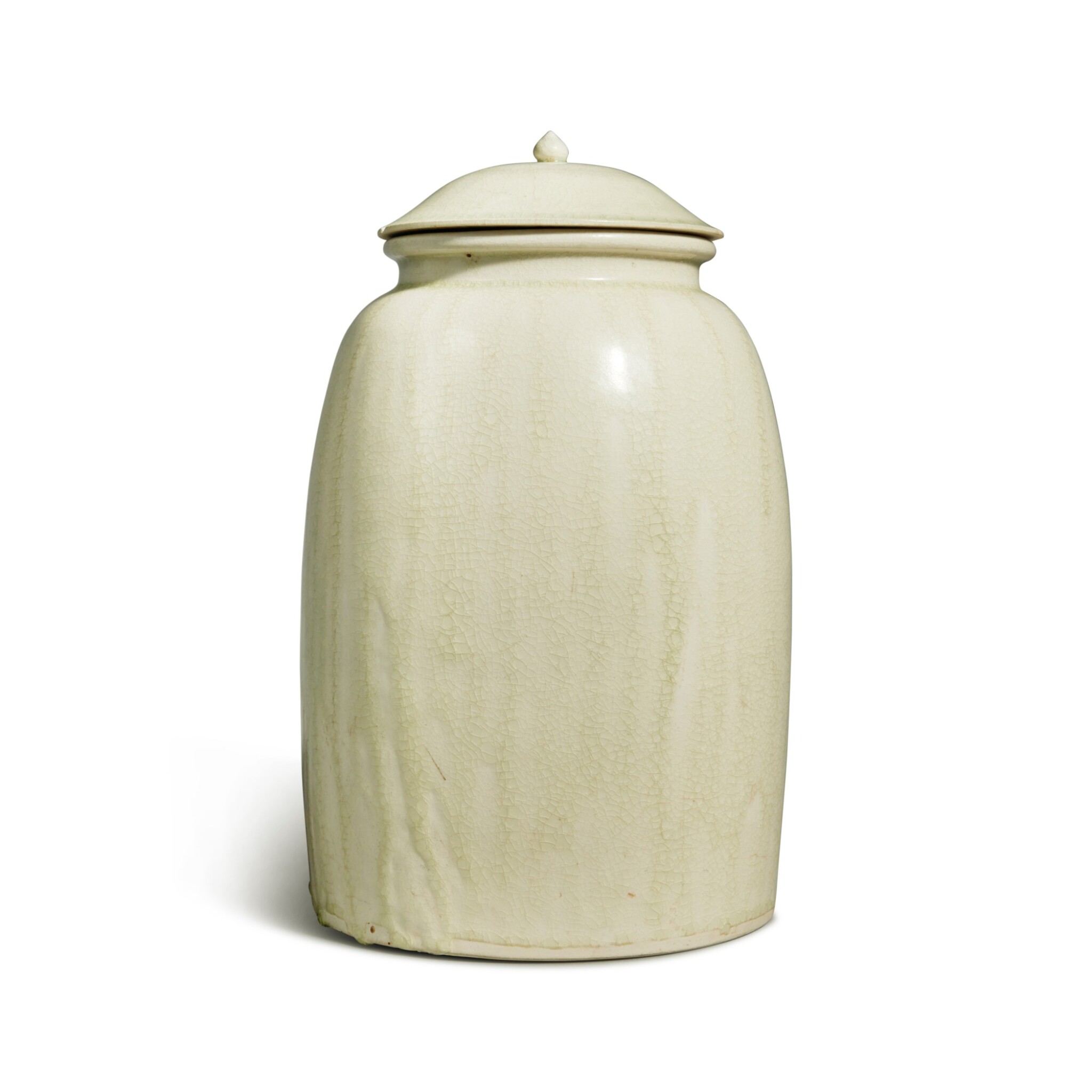 A rare and impressive large white-glazed jar and cover

The jar is in excellent condition with the exception of very minor rubbing to the top edge of the mouth rim. The cover has four shallow flakes to the rim measuring 3, 6, 7 and 11mm. wide; a 5cm., long hairline rim crack extending up towards the knop and 8mm. across the rim; and a tiny glaze frit to the top of the knop.

Large and impressive white-glazed jars from the Sui dynasty (581-618), as beautifully glazed and shaped as this piece, are rare. Wares of this type are testimony to an important achievement in the history of Chinese ceramics. They belong to some of the earliest high-fired stonewares with a white body and transparent glaze, not only in China but in the world, examples of which are extremely rare. Although such wares still tend to have a relatively thick body, they are so similar to the later developed true porcelain that it is not always easy to make a distinction between the two.

While the emergence of stonewares can be traced back to earlier dynasties, it was around 6th century that the firing technique made a major step forward. According to the Palace Museum, Beijing, the white wares excavated from the tomb of Li Jingxun of the fourth year of Daye in the Sui dynasty (608), which belonged to the daughter of an official with close connections to the court, demonstrate a huge improvement in glaze quality compared to the white wares unearthed from the tomb of General Fan Cui of the sixth year of Wuping in the Northern Qi dynasty (575). The firing technique in the Sui dynasty was much more mature so that a whiter color could be achieved. The present jar, with its white glaze and large body skillfully executed, represents the technical advances made during the Sui period, which laid a solid foundation for the further development of white wares in later dynasties, such as Ding ware of the Song (960-1279).

Distinguished by its glaze, size and shape, this vessel has few recorded counterparts. Compare a covered wine offering jar of this form, excavated from the tomb of the official Ji Wei, who was buried in 610 near Xi’an in Shaanxi province, illustrated in Käte Finsterbusch, Zur Archaologie der Pei-Ch'i (550-577) und Sui-Zeit (581-618), Wiesbaden, 1976, pl. 49, fig. 10, and discussed in an article by Zhi Yan in Wenwu, no. 2, 1977, p. 57, where it is reproduced in a line drawing, fig. 1, no. 5. A white-glazed jar of closely related form to the present piece, but of smaller size, measuring 19.2 cm in height, and lacking a cover, is preserved in the Palace Museum, Beijing (accession no. xin-39093), illustrated in The Complete Collection of Treasures of the Palace Museum. Porcelain of the Jin and Tang Dynasties, Hong Kong, 1996, pl. 58 (fig. 1). Another slightly smaller jar, also of beehive shape, but without a cover, was formerly in the collection of Dr Ip Yee, later sold in our Hong Kong rooms, 19th November 1984, lot 131 (fig. 2).