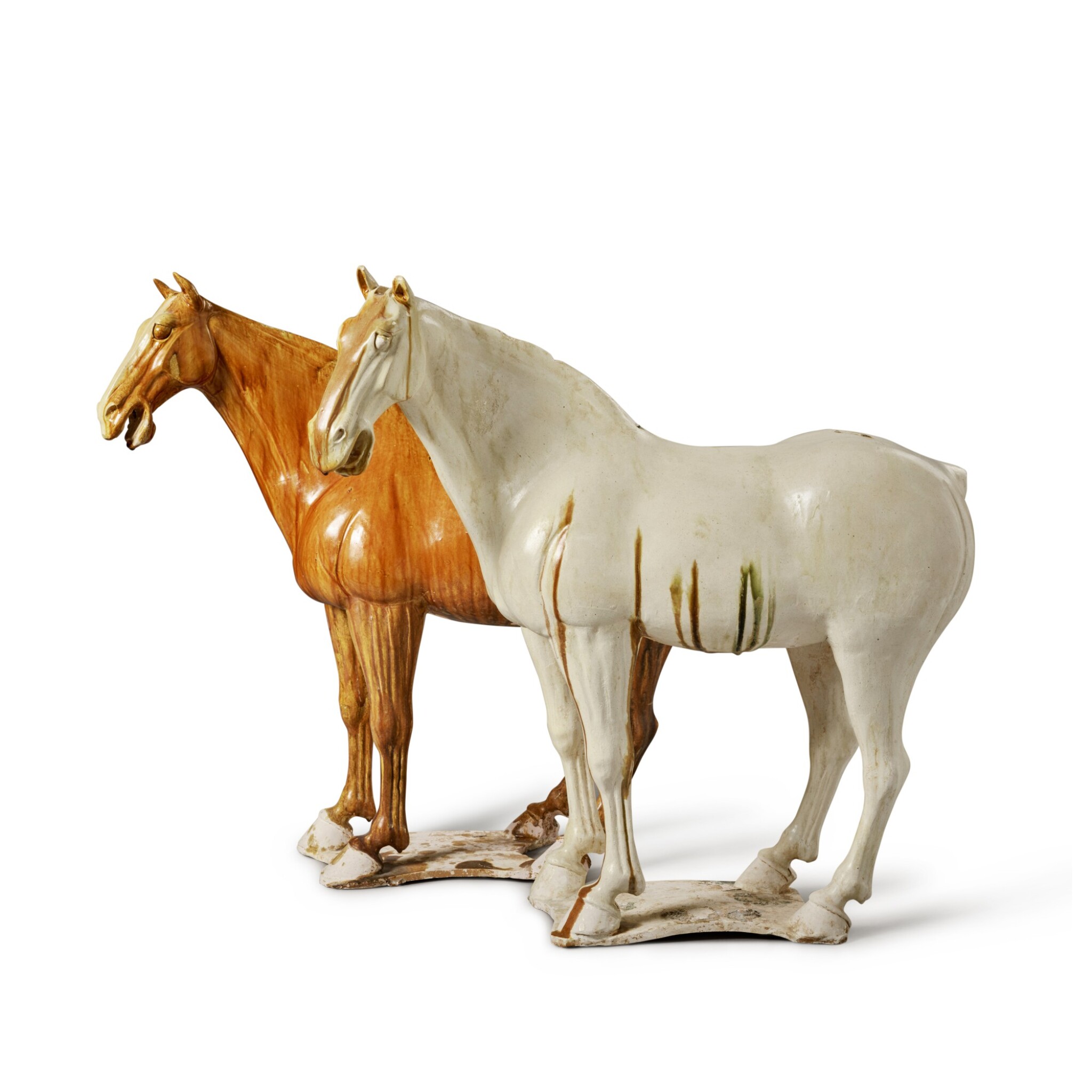 Amber-glazed horse: restored breaks to the legs and the base, restoration to proper right side of the buttocks and upper right hind leg, minor restoration to tip of one ear, chips to the base.

Cream-glazed horse: restored breaks to the legs and the base, minor chips to the mane and tips of ears, minor glaze degradation.

Property of the Howard Gillman Foundation.

Horses have long been a symbol of status and wealth. The representation of a large important pair of distinct and desirable coloration such as the present example, reflect the high rank and importance of the owner and his family. An edict issued in 667 decreed that ownership of horses as an aristocratic privilege, forbidding artisans and tradesmen this right.

Emperor Taizong had portraits of his six favorite battle chargers carved in stone, the Zhaoling Liujun. Each horse is described by its noble deeds in battle and by its color: bay, deep brown, bright chestnut, bay with a white mouth, pale gray, and black with white hooves. The Emperor Xuanzong displayed equal passion for his mounts commissioning paintings from the famed artist Han Gan (c. 706-783). In the Lidai minghua ji (‘Record of famous painters of all periods’; 847), Zhang Yanyuan noted that Emperor Xuanzong ‘loved large horses and ordered Han to paint the most noble of his more than 400,000 steeds’, six of these, all bred from the famed Ferghana stock in Central Asia are described by their respective colors: red, purple, scarlet, yellow, ‘clove’ , and ‘peach-flower’ colored, respectively. The most famous of which is now in the Metropolitan Museum of Art, New York, ‘Night-shining White’ (Zhaoyebai) and attributed to the artist. Indeed, it is easy to speculate that Han Gan’s distinctive style which captures the animals in spirited movement, emphasizing their powerful, rounded and muscular forms while retaining an easy naturalism, influenced the artisans who sculpted the present pair.

The splendid physical appearance of the present pair is enhanced by the fact that, in contrast to most other Tang horses of this stature, they are represented without harnessing, saddles or trappings. They appear free, full of vitality, encapsulating the esteem which they were held in and how prized these magnificent horses of Ferghana were at the Tang court. It is rare to find two large Tang horses of sancai-glazed pottery modeled in this way as a complementary pair, with differently colored coats, one amber, the other cream, but otherwise identically sculpted, of the same powerful build, angle of the head and modeling of the face, and with the musculature identically rendered. Very few examples of glazed pairs of horses have been published. A pair in the Kyoto National Museum, Kyoto, one with a dappled coat and the other black-glazed is illustrated in Mayuyama Seventy Years, vol. I, Tokyo, 1976, nos 197 and 198 and again in Sekai Toji Zenshu, Shogakukan Series, vol. 11, col. pl. 192. Another magnificent pair of sancai horses of similar size, one in black, the other in 'strawberry roan', complete with saddles and trappings, was sold in these rooms, 27th March 2003, lot 36 and again, 17th September 2013, lot 45.

Compare a pair of horses of larger size, one covered in a yellowish-brown glaze and the other in yellowish-white and green glaze, reputed to have been excavated from the tomb of General Liu Tingxun (d. 728) in Luoyang, Henan province, later in the collection of George Eumorfopoulos and now in the British Museum, London (accession nos 1936,1012.226 and 1936,1012.227), illustrated in Neil MacGregor, A History of the World in 100 Objects, New York, 2011, pp 354-5. See also a brown-glazed horse, of similar size to the present pair, preserved in the Metropolitan Museum of Art, New York (accession no. 51.66), included in the Museum’s exhibition Arts of Ancient China, New York, 2005.

The dating of this lot is consistent with the results of Oxford Authentication Ltd. thermoluminescence tests nos C122b67 and C122b68.