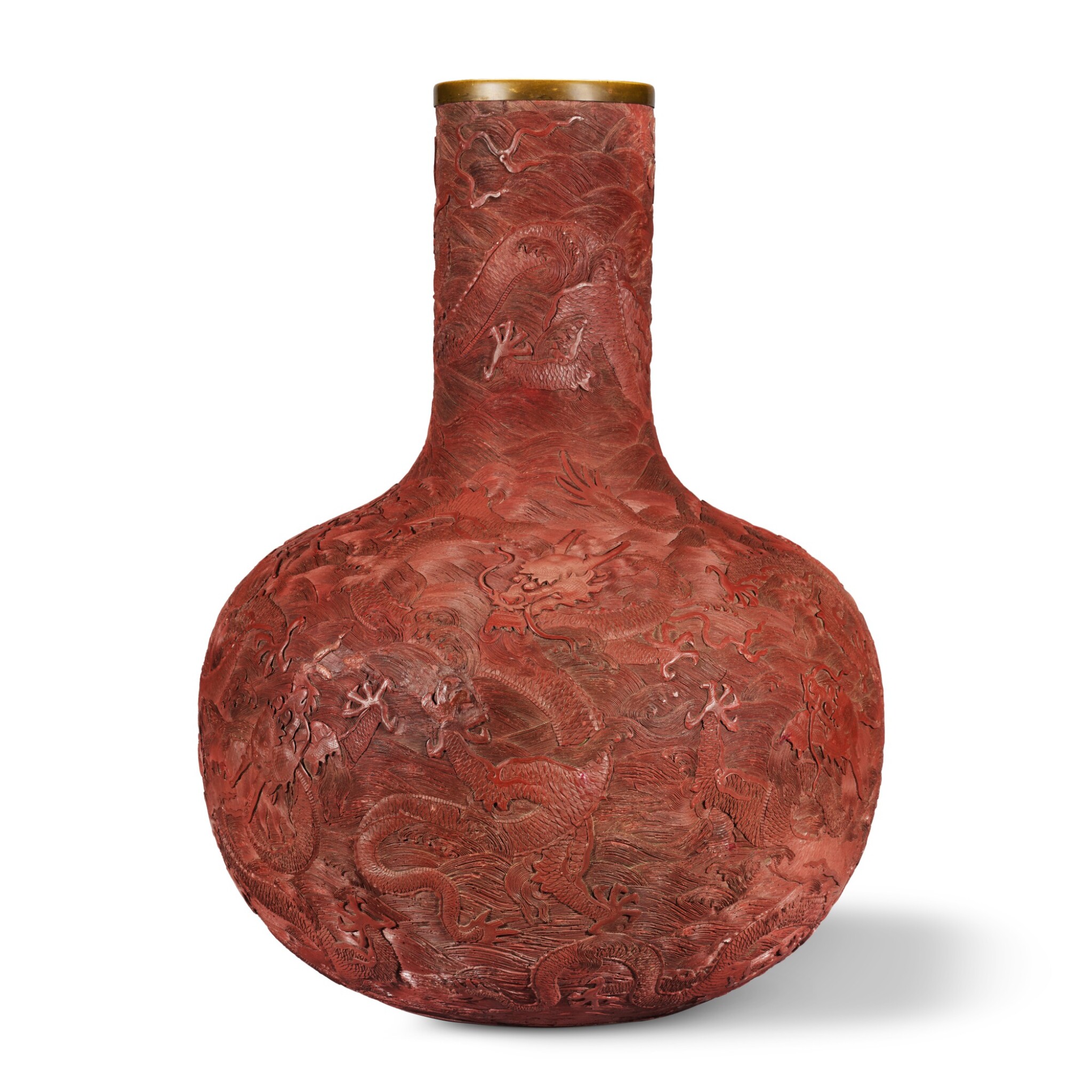 There are scattered losses to the lacquer and old restored areas overall. The rim has been cut and bound with metal.

The present vase is remarkable not only for its monumental size, but also its dynamic and vigorous rendering of dragons striding amongst waves. It is well modelled with a globular body rising to a tall cylindrical neck, finely festooned to the exterior with nine five-clawed dragons, symbolic of the emperor. Each dragon is rendered with a ferocious expression, with gaping jaws to reveal sharp fangs, bulbous eyes and flaring nostrils, in the most meticulous and naturalistic manner. The scaly bodies are depicted in the moment of leaping above the superbly detailed turbulent waves. The complexity of the overall design and the well-proportioned form together showcase the high level of technical skills achieved by craftsmen during this period, when lacquer arts enjoyed a renaissance following their decline at the end of the Ming dynasty (1368-1644) and the intervening years.

Compare a related example formerly in the Qing Court collection, and now in the Palace Museum, Beijing, illustrated in Chinese Lacquer in the Collection of the Palace Museum, Beijing. 1985, pl. 306; and a large example, attributed to 18th century, in the Victoria and Albert Museum, London, published in Edward F. Strange, Catalogue of Chinese Lacquer, London, 1925, pl. 29. Other lacquerware attributed to the Qianlong period with similar design include a large box and cover in the Royal Ontario Museum, Toronto, illustrated in The T. T. Tsui Galleries of Chinese Art, Ontario, 1996, pl. 126; another, sold in our New York rooms, 21st September 2006, lot 66; and a carved cinnabar lacquer screen, sold at Christie's New York, 20th September 2005, lot 104.

Vases of similar design are also seen in porcelain examples, including a turquoise-ground famille-rose vase sold in our Hong Kong rooms, 8th October 2010, lot 2700; and a blue and white example in the Palace Museum, Beijing, illustrated in The Complete Collection of Treasures of the Palace Museum, Blue and White Porcelain with Underglaze Red (III), Shanghai, 2000, pl. 127.