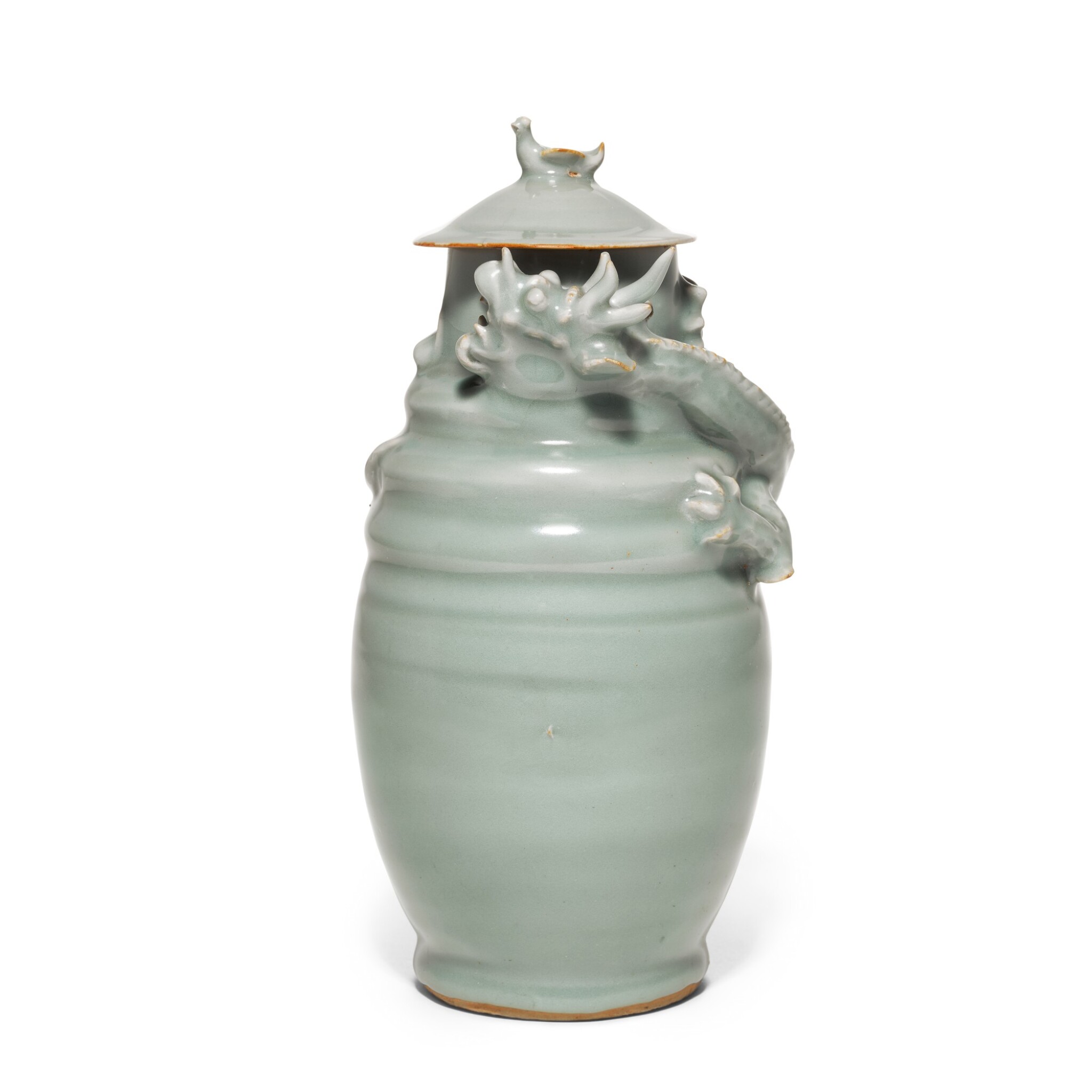 A rare Longquan celadon 'dragon and bird' jar and cover

There are some losses to the right horn at the end of the snout of the dragon. Two firing cracks runnning from the interior of the rim of the cover, visible to the exterior). There is also a minor manufacturing imperfection (2.5cm by 0.3 cm) area of the centre of the interior of the cover. There are also some glaze cracks running through the body and head of the dragon. There is a minor frit to the base of the bird finial to one side and damage to its beak.

Funerary jars of this type are described by Julian Thompson in 'Chinese Celadons', Arts of Asia, November-December, 1993, p. 62, as belonging to the finest Longquan celadon vessels recorded. The glaze of the present jar is a thick lustrous bluish green, often referred to as the kinuta glaze by the Japanese who were especially fond of these wares. Kinuta wares are considered as masterpieces of the Longquan potter, who prepared the perfect glaze executed masterful knowledge and skill over his kiln.

A related jar and cover, from the Avery Brundage collection in the Asian Art Museum of San Francisco, San Francisco, is illustrated in Mary Tregear, Song Ceramics, London, 1982, pl. 286; another, from the Charles Russell and H.M. Knight collections, was sold in these rooms, 12th July 1960, lot 147, and again, 15th July 1980, lot 75; and a further example, from Eskenazi, London, and illustrated in Julian Thompson, op. cit., p. 61, fig. 1 left, was sold in these rooms, 8th November 2006, lot 53.  Compare also a jar and cover in the Indianapolis Museum of Art included in the exhibition Beauty and Tranquillity: the Eli Lilly Collection of Chinese Art, Indianapolis Museum of Art, Indianapolis, 1983, pl. 78; another of similar size and with a domed cover surmounted by a bird finial, from the collection of Warren E. Cox, included in the exhibition Chinese Ceramics in Chicago Collections, Mary and Leigh Block Museum of Art, Northwestern University, Evanston, Illinois, 1982, p. 35, cat. no. 19, sold twice in our New York rooms, 24th May 1944, lot 53, and again, 19th March 2007, lot 138; and a third example, from the Carl Kempe collection, sold in these rooms, 14th may 2008, lot 312.

It is thought that funerary jars of this type were made in pairs, one bearing the 'Green Dragon' of the East and the other the 'White Tiger' of the West. A pair from the Sir Percival David collection and now in the British Museum, London, is published in Margaret Medley, Illustrated Catalogue of Celadon Wares, London, 1977, pl. IV, no. 36, where she notes that these jars may have been filled with aromatic oils.