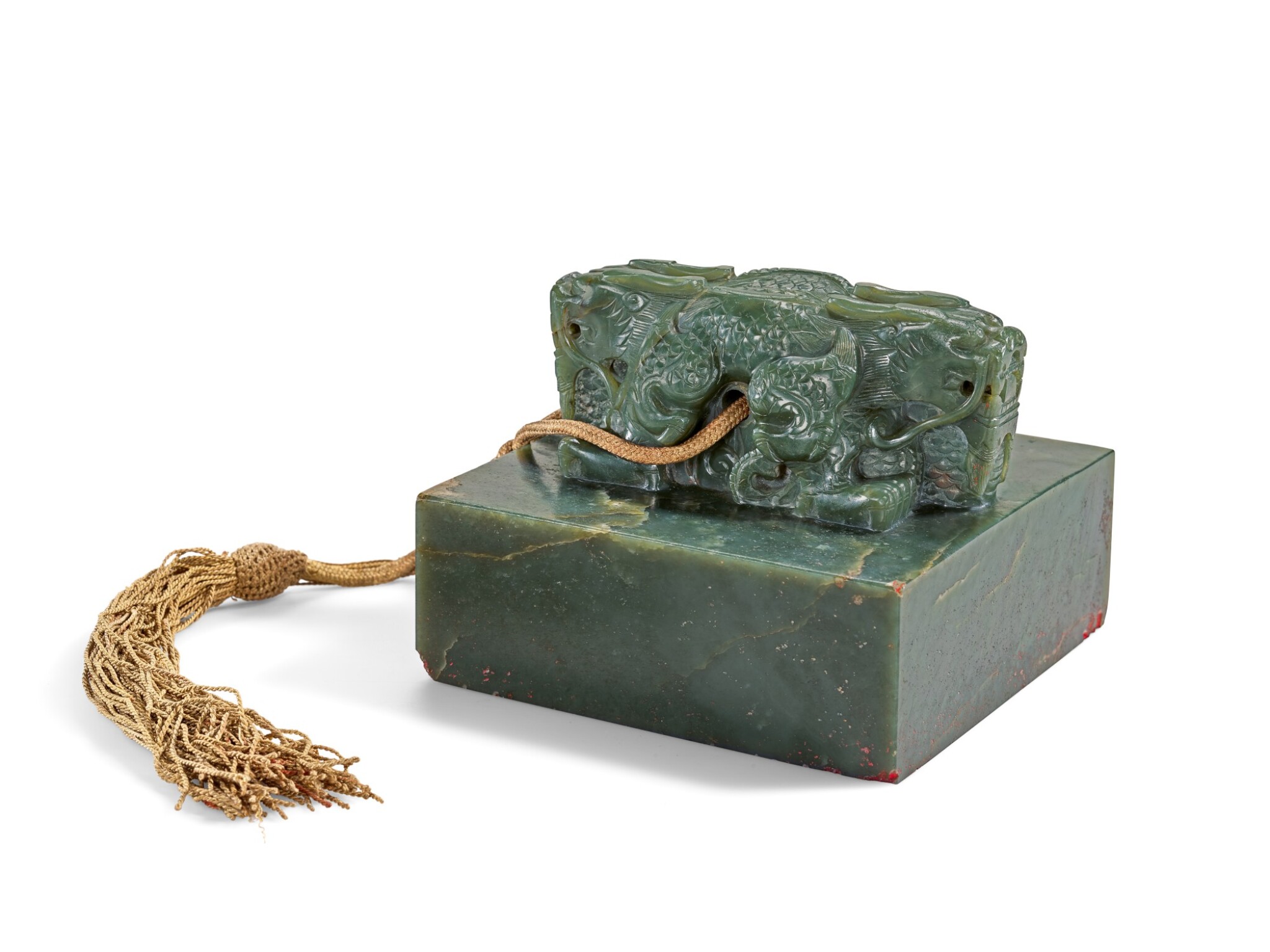 The four corners of the seal are chipped, particularly the lower corners. Fritting along the four sides of the seal. Small nicks to the raised part of the dragon, the horns of both dragons appear to have been polished on the top. The stone a dark green with greyish tones and natural inclusions throughout.

This seal belongs to a special group of seals known as yibao, or posthumous seals. Such seals were not created to be used during the lifetimes of emperors and empresses but rather were produced after their deaths as part of the system of ancestral temples and posthumous naming in China. The present was created in the early 19th century for the first wife of the Kangxi Emperor, Empress Xiaochengren, who tragically died after giving birth to her second son, Yingren, at the age of twenty.

In Chinese history, the worship and posthumous naming of emperors and empresses were an important component of court rules governed by explicit and strict regulations. Posthumous imperial seals were an essential category of artefacts created to be included in these rituals. In general, a posthumous title contained ten laudatory terms for a total of twenty Chinese characters. Usually twelve characters in length initially, an empress’s posthumous title typically beginning with xiao [filialness], continuing with a series of eulogising phrase, and ending with the temple name of her emperor. An emperor newly ascended to the throne was to add one or two laudatory phrases to the previous emperors and empresses. Seeing the potential for these titles to become unwieldy and confusing, the Qianlong emperor issued an edict upon ascending the throne that additions were only to be made within reason. By the Jiaqing reign, it was decided that titles would not be further lengthened and the meanings and lengths of imperial posthumous titles were standardised.

In the chaos of the early twentieth century, the forty seals in Beijing were lost and dispersed around the world, one of which is believed to be the present seal. In the second year of the Xuantong reign (1910), the Qing court remade these seals, which are now mostly in the collection of the Palace Museum in Beijing. Due to time constraints and financial difficulties faced by the court, these later creations were of considerably lower-quality craftsmanship than the originals.

A seal inscribed with the posthumous title of the Qianlong Emperor, produced in the Jiaqing period, held in the Shenyang Palace, is published in Shenyang gugong bowuguan can jingpin daxi. Gongting yiwu juan [Compendium of Collection in the Shenyang Palace Museum: Relics of the Qing Court Collection], Shenyang, 2017, pl. 14, together with closely related posthumous seals for the Jiaqing, Xianfeng and Tongzhi and Guangxu Emperors made in their succeeding reigns, ibid., pls 15-18.