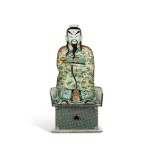 A large famille-verte biscuit figure of a Daoist deity

the figure: some general wear to the surface, minor chips to the edges and scattered flakes to the enamels including one to the beard hanging on the right side. There are also some old overspray to the top of the head, and short firing lines including a few around the collar.

the stand: there is a chip (ca. 2.3 by 1 cm) to the front edge, an incipient chip to one corner of the top (ca. 4.2 cm wide to the exterior), and a very small chip with an associated hairline (ca. 8 cm long) to the side across. Some further nicks to the edges and general wear to the surface.

J. F. Blacker, Chats on Oriental China, London, 1919, pl. 75.
Fong Chow, 'Symbolism in Chinese Porcelain: The Rockefeller Bequest', The Metropolitan Museum of Art Bulletin, Vol. 21, no. 1, 1962, pg. 19, pl. III.
This magnificent figure of a Daoist deity is impressive for its massive size and the vivid coloration of the robe and throne. On account of the third eye in his forehead, the figure can probably be identified as Huaguang Dadi, also known as Ma Lingyao or Ma Lingguan, Marshall Ma, one of the four protectors of the Daoist Faith, also considered as a God of Fire and therefore particularly revered by potters.

The technique of decorating biscuit with colourful enamels, became popular in the Ming dynasty (1368-1644) and was perfected by the potters of the Kangxi reign (1662-1722). It is remarkable that this figure is still preserved with its original throne-shaped pedestal. A figure almost identical to the present piece but without the throne, formerly in the collection of John D. Rockefeller Jr. and the Metropolitan Museum of Art, New York, was sold at Christie's New York, 15th September 2016, lot 878. A figure of Shou Lao, the God of Longevity, seated on a throne related to the present piece, but overall of smaller size, formerly in the Widener Collection, is now in the National Gallery of Art, Washington D.C. (accession no. 1942.9.592), illustrated in the Museum's publication Decorative Arts, Part II. Far Eastern Ceramics and Paintings. Persian and Indian Tugs and Carpets, Washington D.C., 1998, p. 194.