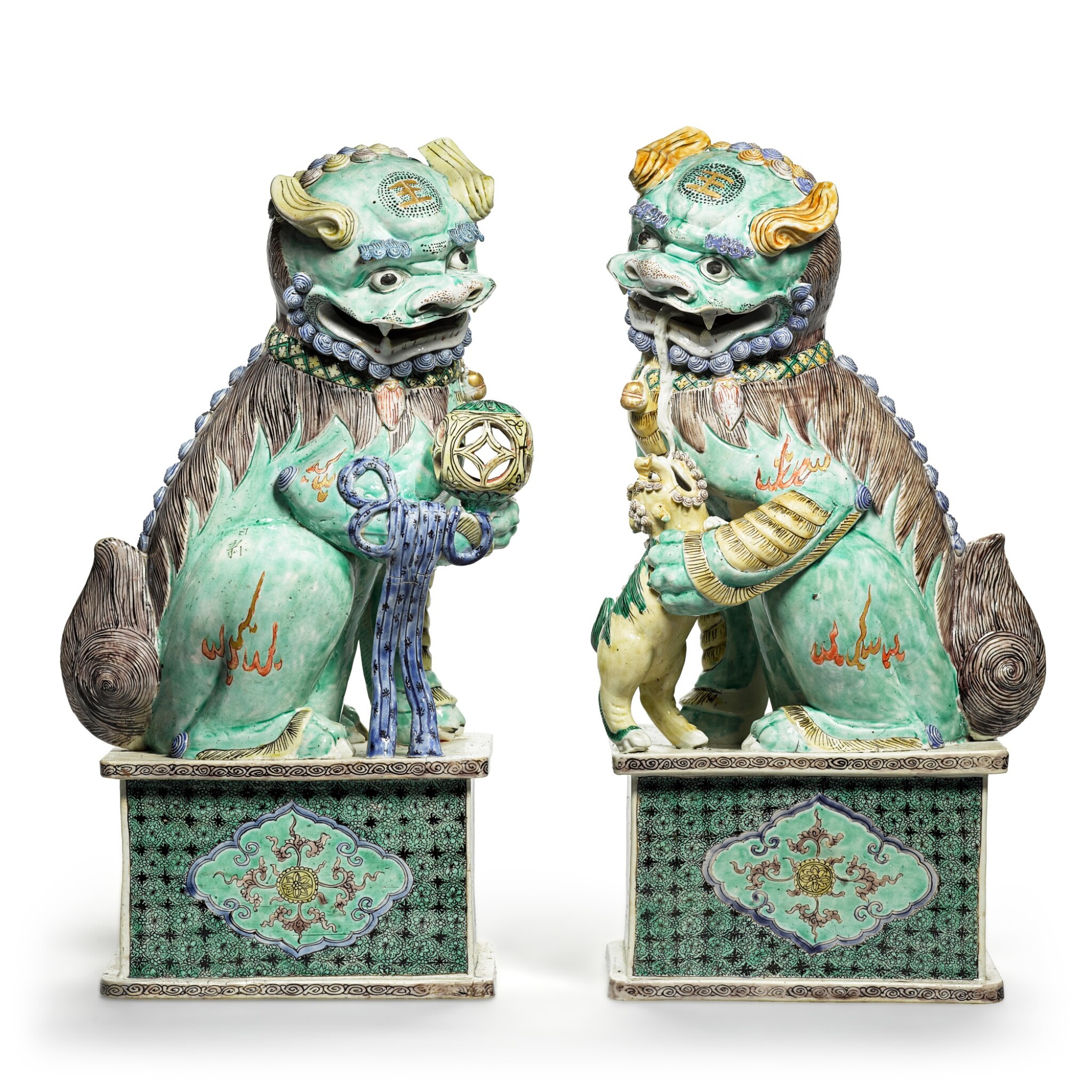 A large and impressive pair of famille-verte biscuit Buddhist lions

Deftly painted with fine details on their bodies and even on the plinths, the present pair of large lion figures is of exceptional quality. Since at least the 3rd century AD, pairs of lions made of stone or bronze have flanked entryways to palaces and temples to ward off evil spirits. In the Forbidden City, Beijing, there are seven pairs of guardian lions still standing today, including a bronze pair at the Gate of Supreme Harmony (Taihe dian). The male lion usually has his paw resting on a brocade ball to symbolise power, while the female has a playful cub under her paw to represent prosperity. Ceramic lions are often inscribed with the Chinese character wang (king) on their foreheads as a sign of their strength, as can be seen on the present lot.

During the Kangxi period (1622-1722), lion figures were popular domestically and perhaps even more so in Europe, where they were sometimes referred to as ‘Fo (Buddhist) dogs’. Some of them are now held in important museums and private collections worldwide, including two closely related pairs preserved in the Staatliche Kunstsammlungen Dresden, the first (accession nos PO 3634 and PO 3635) with finely painted decorative details comparable to those shown on the present pair, the lion heads coloured in yellow, their bodies in green, illustrated in Eva Ströber, “La maladie de porcelaine’. East Asian Porcelain from the Collection of Augustus the Strong, Leipzig, 2001, pl. 23; the second pair somewhat less finely detailed (accession nos PO 8955 and PO 8956). The Royal Household Collection of Drottningholm Palace, Sweden, also holds two similar pairs of lion figures, included in Jan Wirgin, K'ang-Hsi Porcelain, Selected Objects from Swedish Collections, Stockholm, 1974, pls 46-7 and colour plate 1, one of them, collected by Queen Hedvig Eleonora (1636-1715), also finely painted. Such level of brushwork can also be found on a pair sold at Christie’s New York, 2nd June 1994, lot 375. See also a pair of lions from the Leonard Gow collection, included in the International Exhibition of Chinese Art, Royal Academy of Arts, London, 1935-6, cat. no. 1656.

The dating of this lot is consistent with the result of Oxford Authentication thermoluminescence analysis report no. P107e68.