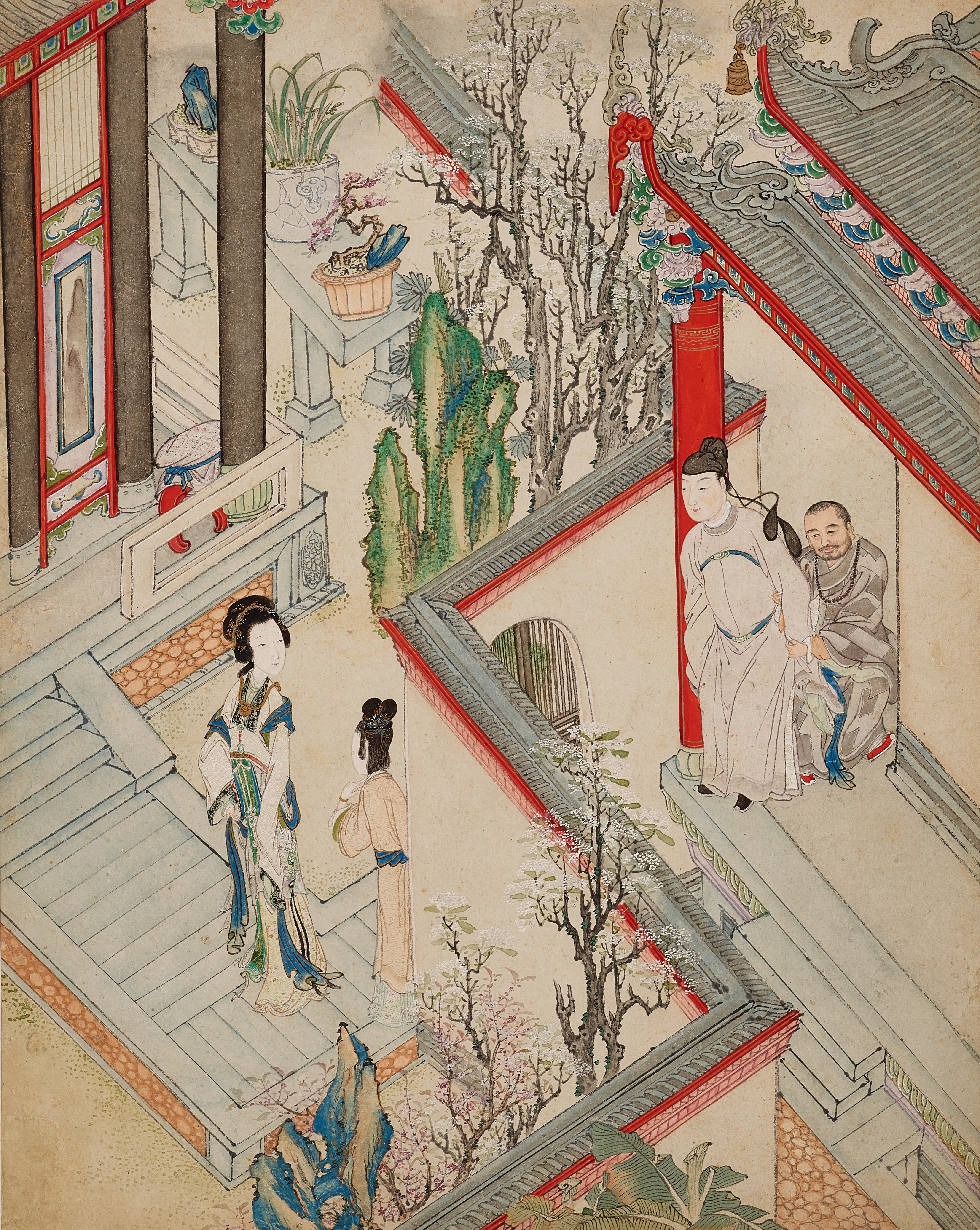 Scenes from Xixiangji [Romance of the western chamber]

an album of 14 paintings, with text pages, ink and colour on paper

Text of three scenes (Act 1, Scenes 2-3; Act 4, Scene 3) and illustrations of two scenes (Act 2, Scene 1; Act 3, Scene 2) are missing. The set is otherwise in overall good condition with foxing, old stains, minor creases, typical insect holes and insignificant repair, all expectable for its age. The text and paintings were inspected without removing from the frames.

Gardens of Pleasure: Sex in Ancient China. An Exhibition of the Ferdinand M. Bertholet Collection, Hong Kong, 2014, figs 6 and 9.

The scenes of the present album are taken from the famous story of a secret love affair between the young scholar Zhang Sheng and Cui Yingying, the daughter of a Tang dynasty minister. Originating in the Tang dynasty, the tale was adopted by Wang Shifu of the Yuan dynasty in the popular drama Xixiangji [Romance of the West Chamber], which became a major source of inspiration for scholars and artists for centuries to come.

Wang’s play was structured in five acts of four scenes each. However, the last act is considered inferior and is often omitted, as it is in the present album. The story opens with Zhang Sheng catching sight of Cui Yingying at Universal Salvation Monastery on his way to the capital for the civil examination (the first illustration). The couple then fell in love. With the help of Yingying’s witty maid Hongniang, Yingying consummated their love in violation of a previously arranged betrothment (the eighth and tenth illustration). Sun Feihu, a local bandit who desired Cui’s beauty, attacked the monastery hoping to abduct her but was defeated thanks to Zhang’s strategic defence. Following this, Madam Cui, Yingying’s mother, reluctantly allowed the couple to wed, partly because of Zhang Sheng’s heroic deeds and partly because she learnt from Hongniang about their shared intimacy (the twelfth illustration). However, her approval was contingent on Zhang attaining academic merits in the imperial examination. On his way to the capital, Zhang woke up from a nightmare that made him question his love affair (the last illustration). Zhang eventually succeeded in the examination. However, the good news remained undelivered, and the original fiancé deceived Madam Cui in hopes of marrying Yingying himself. The story ends with Zhang returning in time to abort the indecorous wedding and reunite with Yingying.

The idea of defying parental will in the name of love, in addition to the occasionally suggestive, licentious content, made this work a target of censorship at various times. Nevertheless, the story continued to enjoy popularity and scenes from it were retold in various formats, from paintings to decoration on lacquerwares and ceramics.

The painting style is probably after that of Chen Hongshou (1598-1652), as suggested by Cédric Laurent (Le Palais du printemps, op. cit., p. 73). The slender and elegant figures, with their slightly oversized heads, are finely pencilled and naturally rendered.