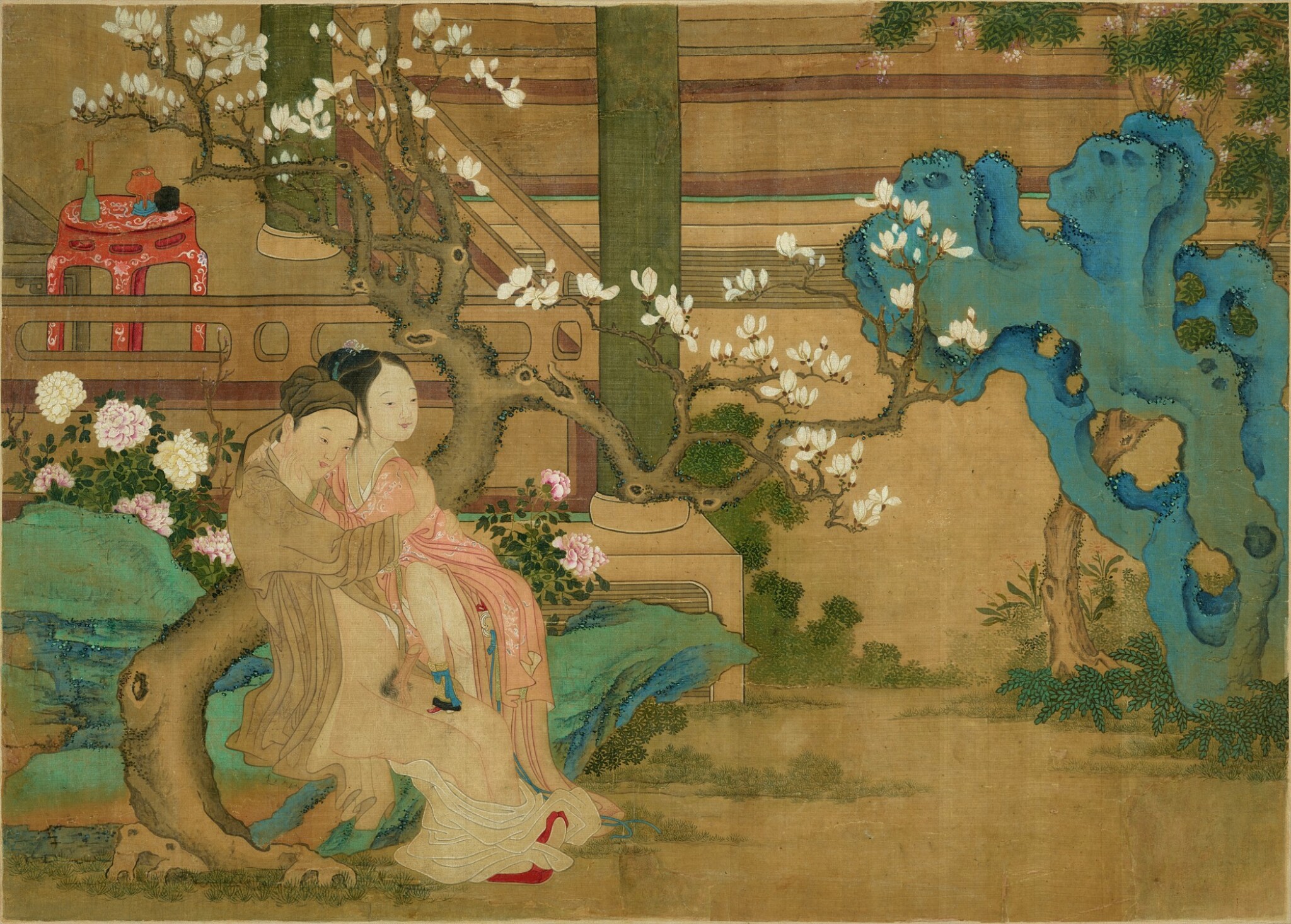 a complete imperial album of 8 paintings, ink and colour on silk

This complete, superbly painted album is in overall good condition, with the brilliant pigments very well preserved. There are minor foxing, old stains and creases, which are expected for its material and age. There are also typical professional repair, especially to the edges.

The figures are naturalistically rendered with facial features that conform to the traditional ideal of beauty. The actions are passionate but without haste. Most are partially undressed as if caught in a fleeting moment during their affectionate exchange. A couple of them seductively gaze out at the beholder as if signalling a personal invitation (the third and fourth scenes).

The luxuriant plants imply the different seasons: spring with peach blossom, magnolia and hydrangea, summer with lotus and wistaria, autumn with rose and chrysanthemum, and winter with narcissus and prunus. The paintings are further enhanced by rich symbolism throughout the album. The arrival of spring and the idea of romantic love, for example, is evoked by a pair of swallows in flight above a young couple below the willows (the second scene), and in the polygynous scene, a watermelon and a lotus root symbolise fertility (the fourth scene).

Upon close examination it is apparent that the intimate acts are carefully staged, framed by the furniture and architectural elements of the royal pavilions and gardens. All the scenes are semi-private, shielded by trees and rocks. The compositions are outstanding, for harmony is achieved through the balance of lines as well as colours. Top-quality pigments such as malachite, lapis lazuli and vermilion are applied judiciously in order to highlight selected elements. The colouration is mostly well preserved despite the passage of time.

The majority of painters working in the Qing Imperial Academy under the Kangxi Emperor were from southern regions such as Zhejiang and Jiangsu, hence the name nanjiang (‘southern craftsmen’). James Cahill notes that these painters “constituted the Academy, and brought to it their highly developed skills and urban repertories” (Pictures for Use and Pleasure: Vernacular Painting in High Qing China, Berkeley, Los Angeles and London, 2010, p. 35). Jiangsu painter Gu Jianlong (1606-1687 or later) is recorded as appointed painting attendant (zhihou) in the early Kangxi period. During his decade of service at the court, he is believed to have painted an extant series of two hundred illustrations to the late Ming erotic novel Jin ping mei [The plum in the golden vase], presumably for the Emperor (ibid., p. 59).

The present album was formerly in the collection of C.T. Loo (Loo Ching Tsai, 1880-1957). Born into a scholarly family in Zhejiang, Loo was educated in Shanghai before moving to Paris at the age of 20. In 1902 he established ‘Ton Ying’, a private trading company with Zhang Jingjiang, the commercial attaché to the Qing Minister in France, and contributed to the financing of the Xinhai Revolution which ended imperial rule. With access to treasures from the Qing court collection, and agents not only in Beijing and Shanghai but also in the interior cities, he was the unrivalled buyer of Chinese art of all periods throughout the 1920s and 1930s. He originally set up a gallery in Paris, but after the First World War he also opened stores in Fifth Avenue, New York and became a major supplier to museums throughout the US, including the Metropolitan Museum of Art and the Nelson-Atkins Museum of Art.