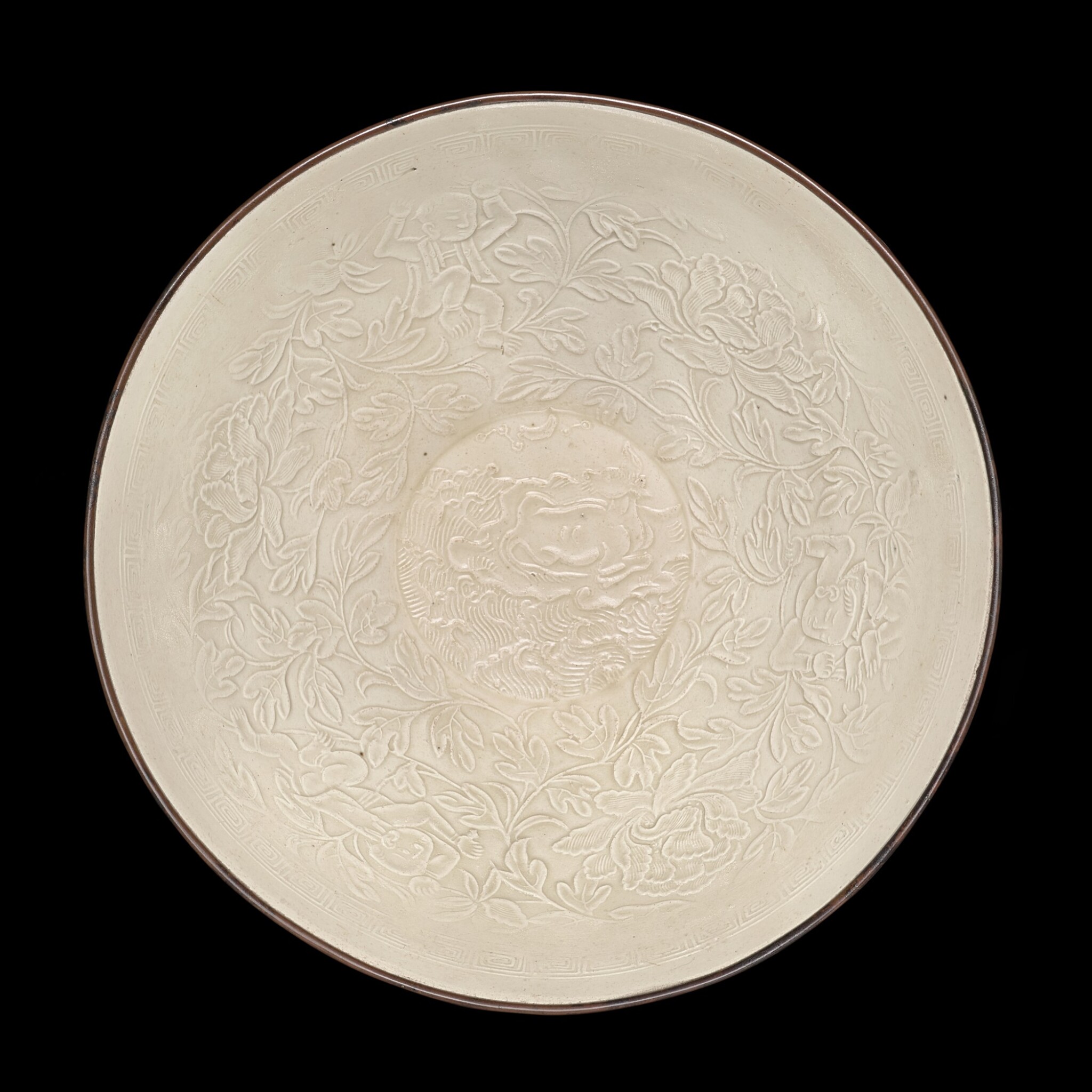 The bowl is in good overall condition with just minute shallow flakes to the footring, the largest measuring approx. 1 cm. There is very light surface wear and minor expected firing imperfections. The bowl has not been inspected without the metal mount.

This bowl is outstanding for its intricately rendered scene of a rhinoceros seated on an island surrounded by tumultuous foaming waves, encircled in the well by three young boys. The depth and clarity of the design, from the naturalistic modelling of the landscape to the detailed rendering of the boy’s features and his clothing, makes this bowl particularly special and rare. Bowls with such sophisticated designs were made using a mould, a technique that began to be used at the Ding kilns in the late 11th or early 12th century and one that allowed for greater precision. These moulds were similar to those used for casting metal vessels, and indeed many designs on moulded Dingyao are also found on contemporary metalware. While no metal counterpart of this exact design appears to be known, a bronze mirror with boys flying through scrolling vines, unearthed in Changchun, Jilin province, now in the Jilin Provincial Museum, Changchun, is illustrated in Zhongguo qingtongqi quanji [Complete collection of Chinese archaic bronzes], vol. 16, Beijing, 1998, pl. 195.

Depictions of boys represent a classic motif of the Song dynasty, known on a variety of objects and media including silver, bronze textile and various types of ceramics. Ann Barrott Wicks in Children in Chinese Art, Honolulu, 2002, pp. 6-15, traces the origins of this motif back to the decorative arts of the Roman Empire, and in particular to depictions of putti, plump boys that later came to be associated with paradise in Christian art. These designs were adopted in Sasanian and Central Asian art and were brought to China through the Silk Road. See for example a gilt-bronze cup, supposedly imported from Central Asia and attributed to the 5th century AD, unearthed in Datong, Shanxi province, and illustrated in Jessica Rawson, Chinese Ornament. The Lotus and The Dragon, London, 1984, fig. 15.

The motif was quickly adapted to suit Chinese religious and philosophical beliefs, and by the Tang dynasty (618-907) it had developed into a fertility symbol. In Chinese Buddhism, the souls of those residing in Maitreya’s Pure Land, were believed to have been reborn through the calyx of a lotus flower. This theory may well have been influenced by the Shangqing school of Daoism and the belief that the visualisation of one’s embryonic state could lead to rebirth. In the eighth century, depictions of boys and lotus began to appear outside religious contexts, and by the Song period, they were believed to encourage the birth of sons and the continuation of a family line.