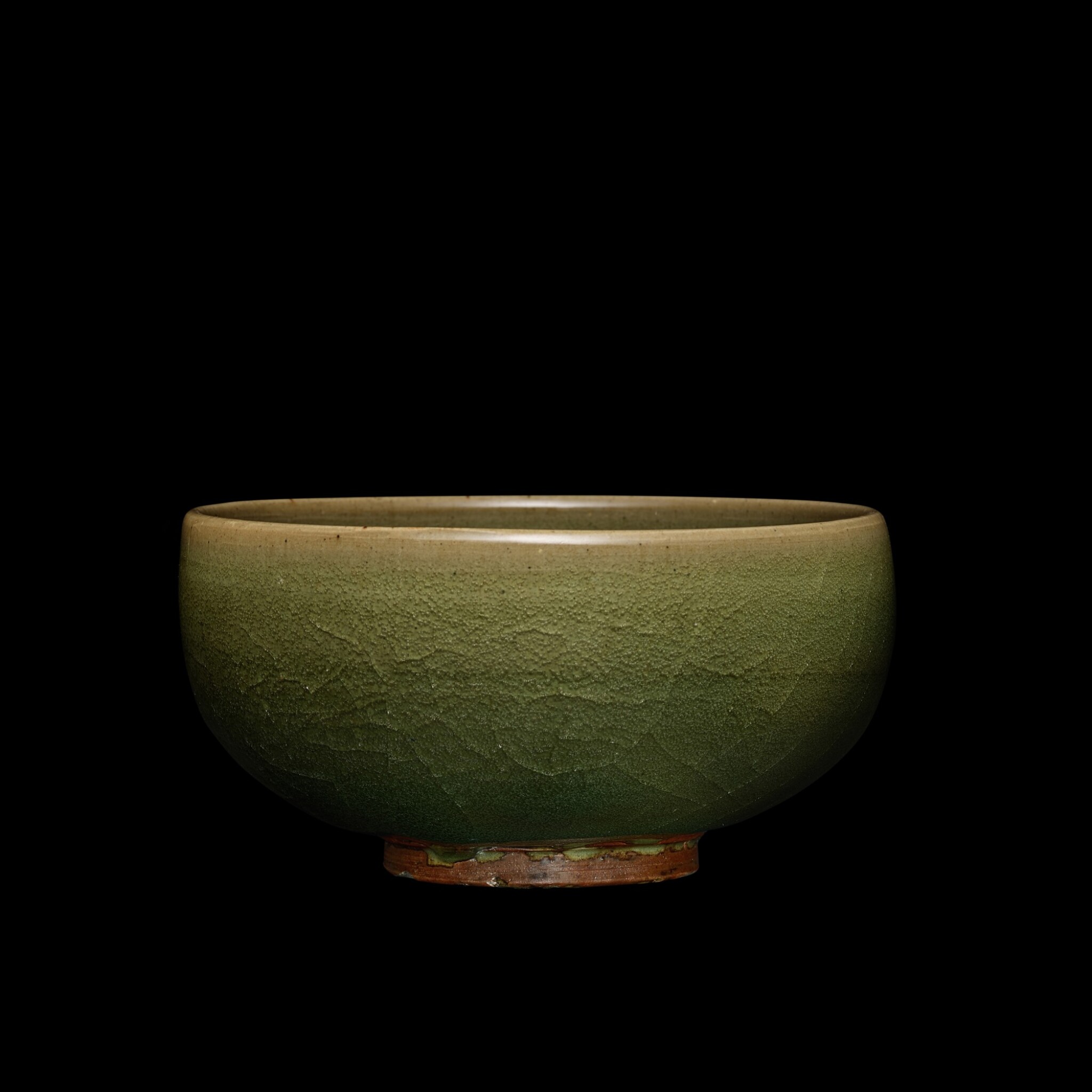 Overall very good condition except for some flakes to the unglazed footring. The glossiness of the glaze has been well preserved.

This exquisitely glazed and shaped bowl has always been catalogued as green Jun. The Jun kilns located in the counties of Yu and Linru in Henan province are best known for wares applied with rich opaque pale blue glaze, but they also produced fine wares that were applied with a similarly unctuous glaze of a soft green colour as seen on the present pair. These green Jun wares share similarities with their blue counterparts, but have a higher alumina content indicating that the potters were mindful of the difference and created them specifically. Very few examples of bubble bowls with green glaze appear to be published. For examples at auction, see a pair of green Jun bubble bowls sold in our New York rooms, 17th March 2015, lot 88, from the Yang De Tang collection.

Excavations in Henan province have brought to light several manufactories – including the imperial Ru kilns of Baofeng – that made wares of Jun type, with blue glazes, with copper-splashed blue glazes and with green glazes, besides the best-known workshops of these wares at Yuntai. The current bowl may well have been made at one of the kiln centres in Ru territory. The Donggou kilns located at Dayu to the east of Ruzhou city, north of Baofeng, yielded not only wares with Jun glazes, but also celadon, white wares, white wares with black painted designs, as well as biscuit-fired pieces and kiln furniture, among them a green-glazed Jun bowl of very similar shape as the present piece, but slightly larger (Henan xinchu Song Jin mingyao ciqi tezhan [Special exhibition of porcelains recently excavated from famous Song and Jin kilns in Henan], Poly Art Museum, Beijing, 2009, p. 154 top), and pieces of similar glaze colour and with similar treatment of foot and base, both partially glazed, with a ring on the base wiped nearly free of glaze (Gugong Bowuyuan cang Zhongguo gudai yaozhi biaoben [Specimens from ancient Chinese kiln sites in the collection of the Palace Museum], vol. 1: Henan juan [Henan volume], Beijing, 2005, no. 470).