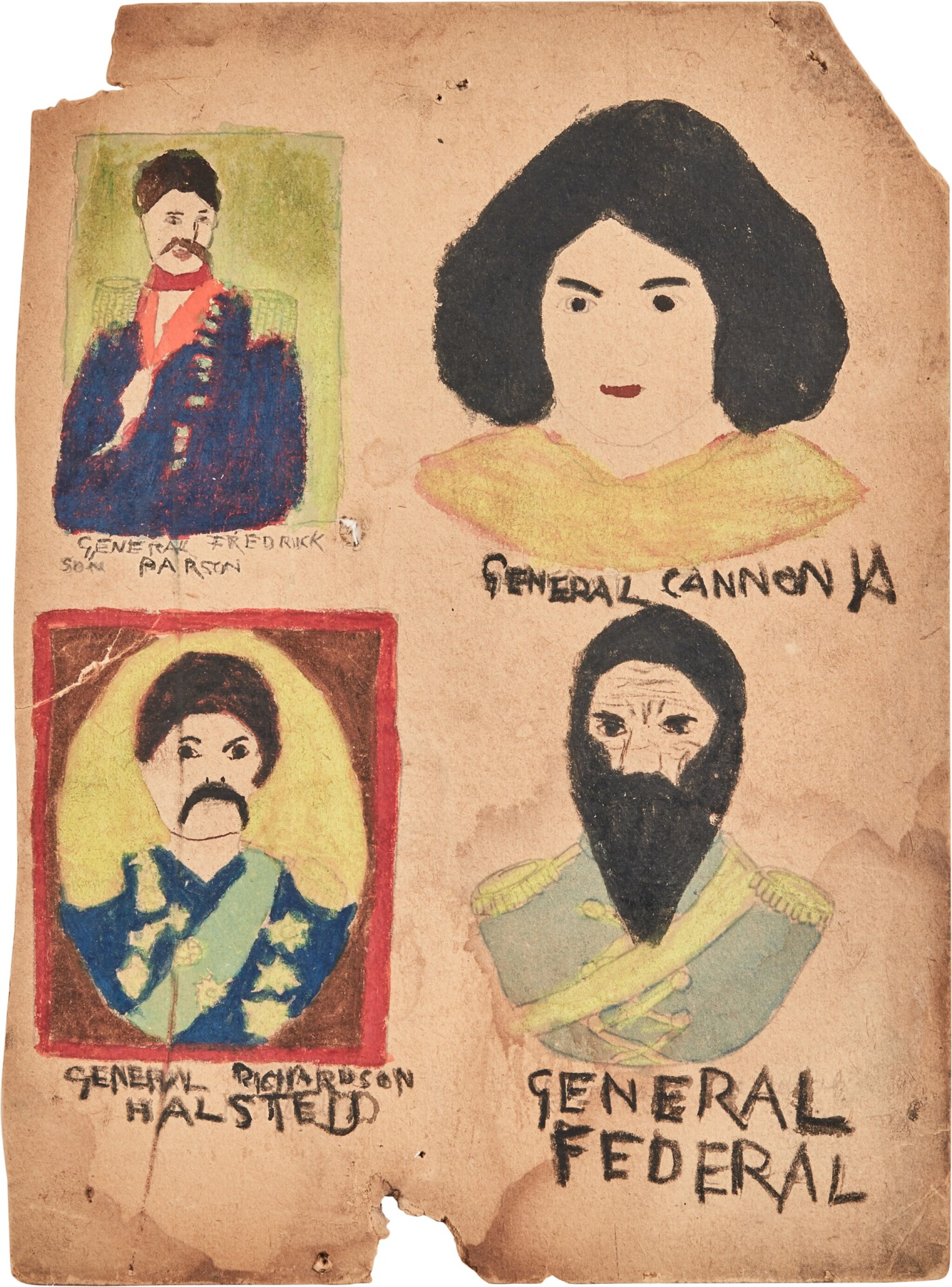 watercolor and graphite on paperboard

To request a condition report for this lot, please contact americana@sothebys.com

John MacGregor states that “for a considerable period, Darger seems to have taken on the task of painting small portraits of all the leading generals who fought in the Glandco-Angelinian wars -both the good and evil participants. Usually several of these small images are placed on a single piece of cardboard, like pages in a family album, with the name of the general printed below. Frequently they appear on both sides of the heavy cardboard, which raises the possibility that initially they may not have been intended for the walls of his room. Occasionally lengthy texts are hand-printed below the figures, and these provide detailed explanations concerning their achievements in the wars.

The consistent size and format of these portraits, as well as the extreme age of the card­board they are mounted on, suggest that this body of work was produced more or less at one time. Over seventy individual portraits survive. In a sense the painted portraits of generals represent the commencement of Darger's own work, as well as the beginning of his involvement with an extremely important technique. In creating these portraits, he abandoned the use of overpainted photographs, relying instead on various methods of tracing photographs or drawings as a means of transferring them onto blank paper. The resulting drawing preserves the basic contours of the original image, as well as the pose and the character of the underlying photograph. The simple tine drawing, which is often in the purple ink of old carbon paper, is then filled in with color. Darger seems to have felt more independent of his model, free to invent his own uniforms and decorations, as well as hair, beards, and mustaches, with which he adorns the underlying faces. Working in dense black ink and watercolor, he filled in the simplified shapes and the flat backgrounds. Given his love of coloring books, it is evident that he had found a way to make his own coloring book of The Realms, which he then completed by filling in the blanks.

Almost invariably, one can detect a more “sophisticated" prototype behind the drawing, and traces of distinct personalities. But the uniqueness of these naive portraits lies in Henry's wonderfully awkward and simplified copies. It was through the supposedly mechanical act of tracing that an insignificant photograph could be transformed into an original Darger drawing and fitted perfectly into the naive narrative style of The Realms. The drawings evoke something of the mood and character types which we associate with the American Civil War. The names Henry invented for his char­acters, and particularly his generals, also seem to recall the heroes of that war, who he could only have known as dark photographs or engravings in military histories. Boldly painted in intense colors, these images hold their own, even when looked at from across a room. ... These drawings, one of which is dated 1918 on the back represent the very beginning of what was to be a vast project, the illustration of In the Realms of the Unreal. They reflect Darger's nascent skill at an early stage. He was twenty-six years old, and nowhere near being the sophisticated artist he would become.” See John M. MacGregor, Henry Darger: In the Realms of the Unreal, (New York: Delano Greenridge Editions, 2002), p. 127.