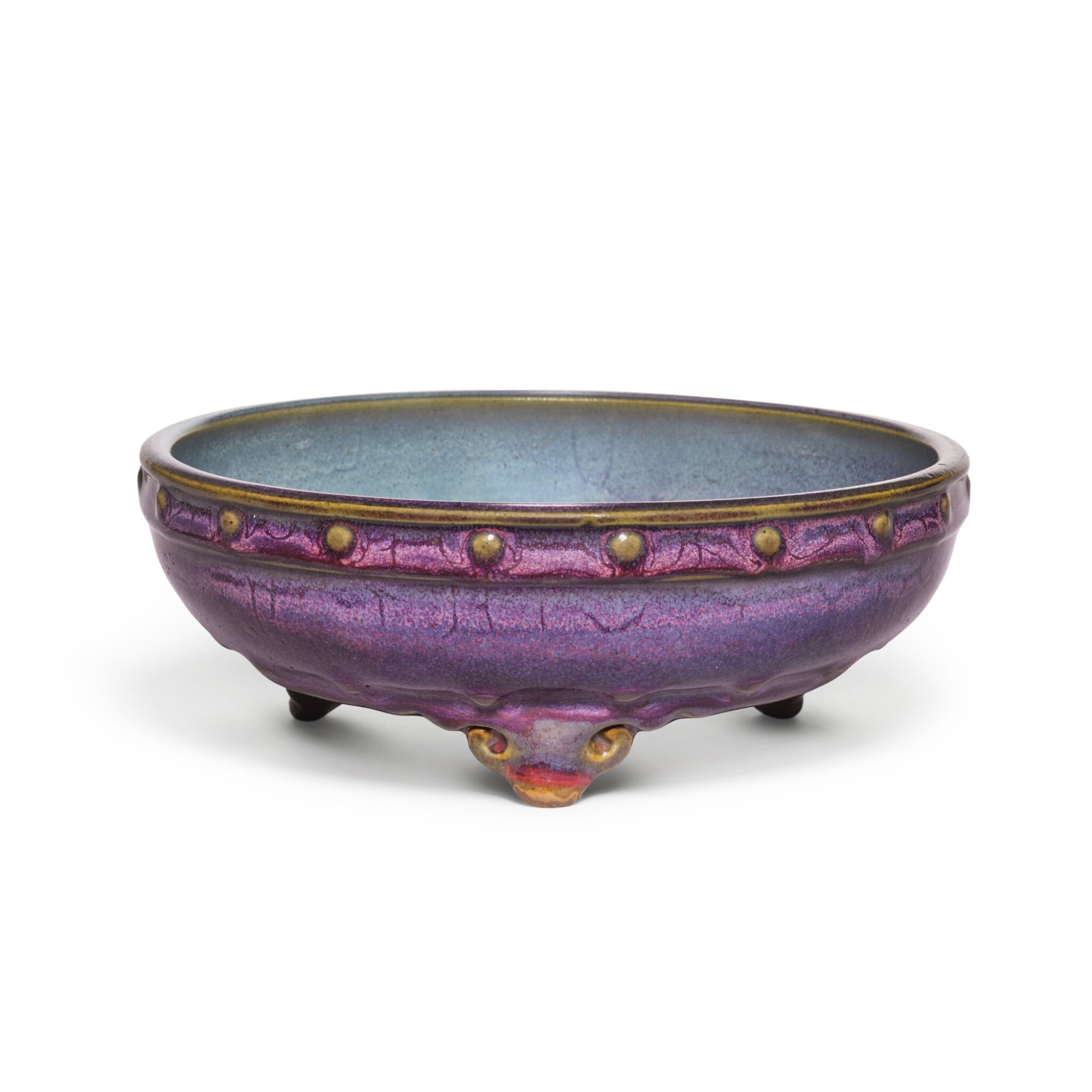 with shallow rounded sides curving down to a flat base supported on three gently flaring ruyi-shaped feet, bordered by a band of evenly spaced rounded studs between two raised ribs around the rim, and another band of studs above the feet, the well-proportioned body applied with a thick and opalescent glaze of an alluring purple-and-blue colouration, the interior with an even milky lavender-blue glaze with characteristic 'earthworm tracks' and accentuated with a wash of mottled purple, the rim and exterior with a vibrant purple glaze in tones of mauve, lavender and plum, thinning to a mushroom tone at the raised edges, the base covered with an olive-brown wash and inscribed with a numeral wu (five), surrounded by a neat ring of tiny spur marks revealing the pale buff stoneware body

In Pursuit of Antiquities: 35th Anniversary Exhibition of the Min Chiu Society, Hong Kong, 1995, cat. no. 97.

Narcissus bowls, also known as ‘drum nail’ basins, belong to a distinct group of flower receptacles known as ‘numbered Jun’ wares; mostly made in moulds and generally inscribed on the base with numerals from one to ten that seem to inversely correspond to the size of the vessels, ‘numbered Jun’ wares with the numeral one are considered the largest. Besides the variation in sizes, these striking vessels were also produced in a variety of glaze colours and patterns. They are much admired over the centuries by the imperial court and connoisseurs for their beautiful array of colours and intensity of the glaze, which varies from an opalescent sky-blue tone to brilliant hues of mauve and lavender.

The present narcissus bowl encapsulates the essence of Jun ware which derives its beauty and minimalist aesthetics from its simple yet robust form and, notably, from its inimitable glaze - a thick, luminous glaze of an alluring purple-and-blue colouration that becomes almost transparent around the edges of the vessel where the glaze thins significantly. The result of the pattern, tonal variations and intensity of the glaze depends entirely on firing variations, making each narcissus bowl a unique work of art steeped in unpredictability. No two Jun vessels are alike and the uncertainty of the final outcome - as though created by nature - plays a vital role in its desirability. Creating such a captivating and exuberant colouration, as seen on the present vessel, is undoubtedly an exceptional artistic achievement, making this narcissus bowl one of the most alluring and outstanding extant examples of its type.

On the present bowl, the blue glaze on the inside is ravishingly bright and glossy, mirroring the blue of the sky; it is accentuated with a wash of mottled purple, reminiscent of a spontaneous and spirited brushstroke that runs and flows uninhibited along the well. The thick opalescent blue glaze is infused with the characteristic markings that have become known as ‘earthworm tracks', and merges with the red of the copper-bearing glaze on the outside, creating a dazzling variegated purplish effect in brilliant tones of mauve, lavender and plum. The rich, mottled purple glaze on the outside subtly and gradually transmutes to a pale mushroom tone that covers the ruyi feet, and all three feet are ‘beribboned’ by a band of vibrant ruby-red. The base of the vessel is thoughtfully applied with an attractive olive-brown wash and with a neat ring of tiny spur marks. Every part of the robust vessel entices one for an intimate inspection of its timeless sophistication and beauty.

While there are a number of narcissus bowls with this particular juxtaposition of purple and blue in major museums and prominent private collections, they are rarely complemented with this beautiful depth, mesmerising gradation and intensity of the glaze as seen on the present bowl. Related examples include three in the Sir Percival David Collection in the British Museum, with numerals four, five and seven (museum nos PDF.34, PDF.35 and PDF,A.56); three in the Beijing Palace Museum, with numerals one, two and seven, illustrated in Selection of Jun Ware. The Palace Museum's Collection and Archaeological Excavation, Beijing, 2013, pls 95, 94 and 113; four examples in the Taipei Palace Museum, with numerals one, two, four and eight, illustrated in A Panorama of Ceramics in the Collection of the National Palace Museum: Chun Ware, Taipei, 1999, pls 29, 31, 32 and 36; another two bowls with numerals one and four, from the Baur Collection, collection nos A47 and A48, illustrated in John Ayers, Chinese Ceramics in The Baur Collection, vol. 1, Geneva, 1999, pls 19 and 20; and an example with the numeral one, from the Eumorfopoulos Collection in the Victoria and Albert Museum, accession no. C.105-1939. One of the most representative groups of narcissus bowls is also preserved in the Harvard Art Museums. For examples sold at auction, see two bowls bearing the same numeral five, one was formerly in the Linyushanren Collection, sold at Christie’s New York, 22nd March 2018, lot 542; the other sold at Christie’s New York, 15th September 2009, lot 341. See also an example with the numeral six, first sold in our London rooms, 12th June 2003, lot 108, and again in these rooms, 5th April 2017, lot 1107. Unlike other demonstrations of its kind commonly represented in museums or private collections, the present bowl boasts a unique colour gradient and vibrancy which constitutes a striking departure from the Jun ware paradigm.