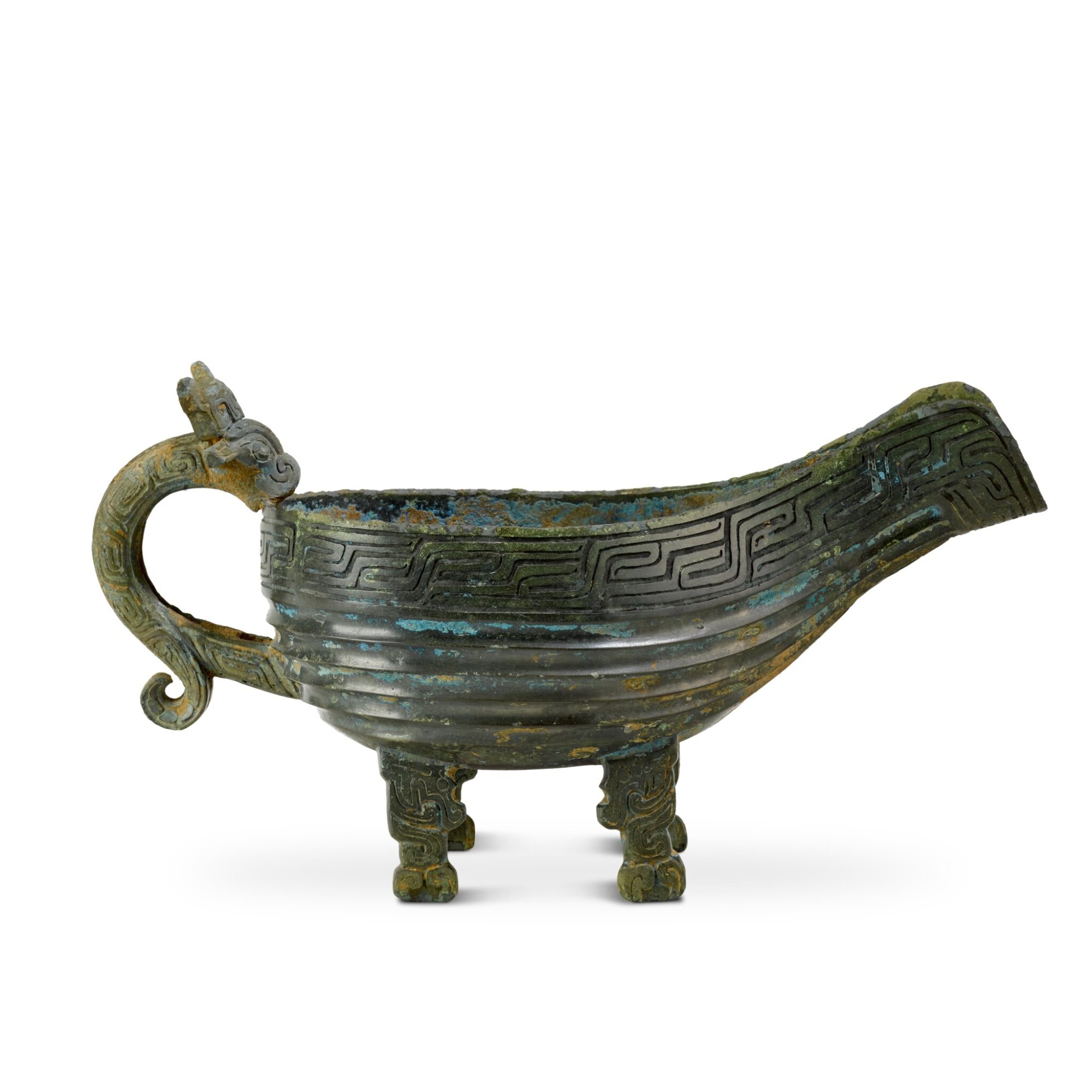 the boat-shaped vessel raised on four dragon-shaped feet and set with a curved U-shaped spout, the exterior cast with horizontal concave ribs with a wide band of zoomorphic S-shaped motifs below the rim, set to one side with a loop handle formed by the arched body of a ferocious mythical beast with elaborate horns and a coiled tail, the interior cast with a fifteen-character inscription reading Yang Zhong Hou zuo baoyi, qi wannian zisun baoyong yongxiang, which can be translated as 'Yang Zhong Hou made this precious yi, to be treasured for ten thousand years, and for the eternal use of his sons and grandsons'

There is a diagonal casting flaw only visible on the exterior base. Typical corrosion, oxidation and occasional minor apertures, especially to the underside of the handle. X-ray images available upon request.

The function of yi has been documented since the earliest stages of Chinese history; yi were used together with water basins, pan, in ritual ceremonies for the cleansing of hands. It was stipulated in The Book of Rites, Liji, that an elder would pour water from the yi for the ritual performers to wash their hands before they proceed with sacred rites, of which the clan’s junior member would concurrently carry a pan to collect the water. Yi had been a tangible symbol reflecting the ritual etiquette of royalty and the nobility during the Zhou dynasty. The present yi is impressive and outstanding not only for its ceremonial role, its perfect harmony of form and decoration, but most crucially, the historical significance revealed by the long inscription.

The fifteen-character inscription reads ‘Yang Zhong Hou made this precious yi, to be treasured for ten thousand years, and for the eternal use of his sons and grandsons’. The meaning and significance of the first character, Yang, have come to light with recent re-examinations on the character and archaeological findings discovered in the second half of the 20th century in the southern part of the Henan province. The character Yang is now believed to be referring to the Yang State, a long-lost state spanning the present-day Tongbai and Biyang counties in southern Henan province, with the city centre situated around the Yuehe Town of the Tongbai county. People of the Yang State appear to be the descendants of the Eastern Yi ethnic group; among which, Yang Zhong Hou, as mentioned in the inscription on the present piece, is suggested to be of royal descent of the Yang State. The State was allegedly established before the end of the Western Zhou dynasty circa 8th century BC, and was later conquered and annexed by the Chu people in 528 BC as recorded in The Commentary of Zuo. Archaeological findings reinforce this narrative, as of all the Yang State bronzes unearthed so far, they were found in the tombs attributed to the late Western Zhou dynasty or the Spring and Autumn period of the Eastern Zhou dynasty.

Vessels from the Yang State are extremely rare, with less than twenty known surviving examples. Compare a closely related example of a very similar design and bearing an almost identical dedication except for the sequencing of the last four characters, unearthed in Guogang, Biyang County, Henan province in 1980, illustrated in Li Fangzhi, et al., ‘Henan Biyang faxian Chunqiu tongqi [Bronze vessels of the Spring and Autumn Period discovered in Biyang, Henan]’, Wenwu, vol. 6, 1982, pp. 169-70. The vessel was unearthed along with its companion basin. For a detailed discussion on Yang State and its bronzes, see Xu Shaohua, ‘An Analysis of Bronzes of the Ancient Yang State and its History and Geography’, Kaogu xuebao, 2008, no. 4, pp. 441-60; where the author also mentioned the discovery of a Yang Zhong Wu Long yi, a Yang Bo Su yi, and a Yang Bo Yong water basin.

Compare also two inscribed yi of similar design in the Shanghai Museum, both attributed to the late Western Zhou dynasty, including a You Bo Jun yi, which lacks the bifurcated tail to the dragon handle, illustrated in Chen Peifen, Xia Shang Zhou qingtongqi yanjiu [Study of Archaic Bronzes from Xia, Shang and Zhou Dynasties], Shanghai, vol. 2: Western Zhou, 2004, pl. 425; and a San Bo yi, which features a slight variation of the rim border, illustrated in Zhongguo qingtongqi quanji [Complete Collection of Chinese Bronze Vessels], vol. 6, Beijing, 1997, pl. 147. For examples sold at auction, see a yi formerly in the collection of Geroge F. de Menasce and Mr and Mrs Bella and P.P. Chiu, sold in our London rooms, 7th June 2000, lot 12; and an inscribed yi from the collection of Dr Wou Kiuan, sold in our New York rooms, 22nd March 2022, lot 39.