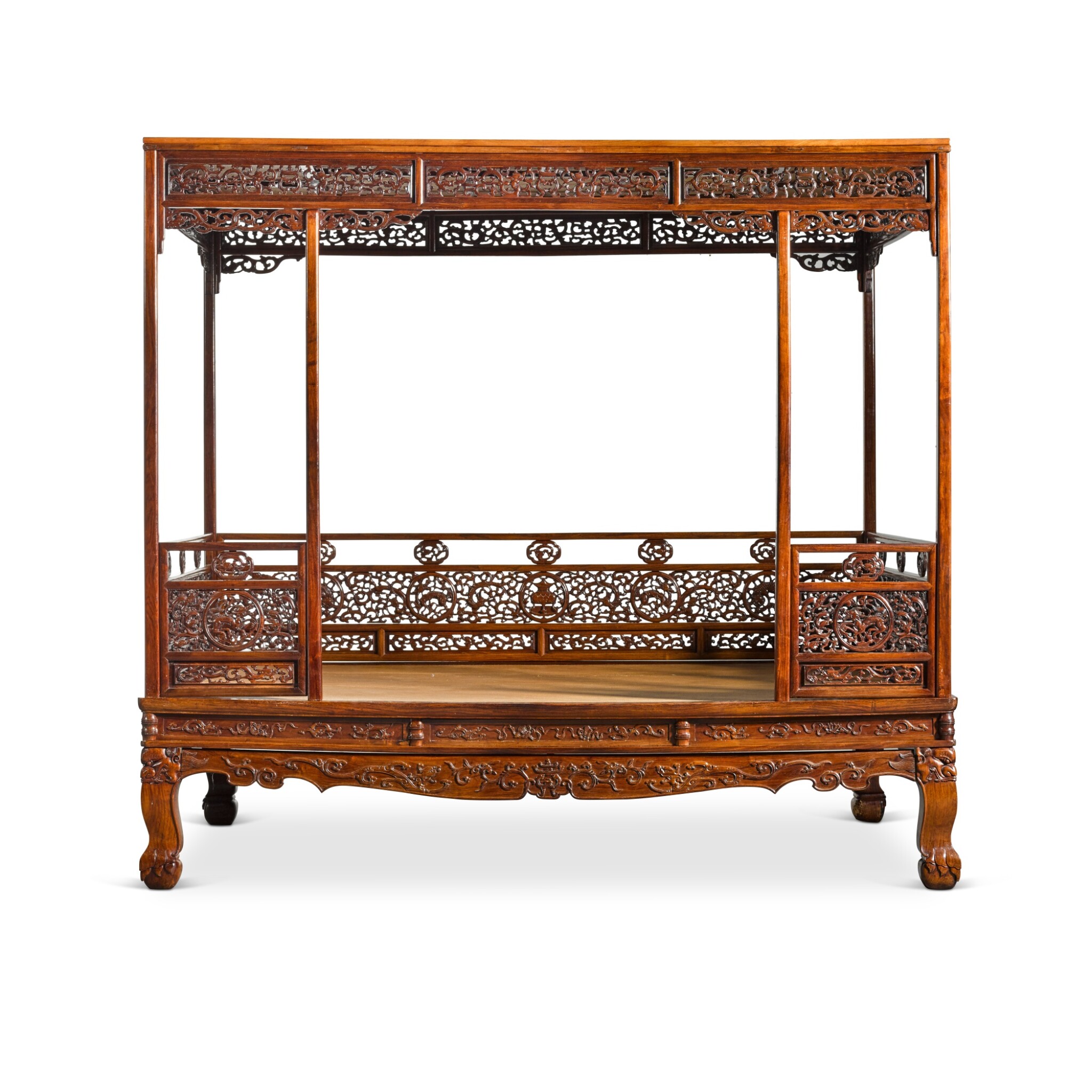 well proportioned, the wide rectangular frame enclosing a soft-mat sleeping surface surmounting a constricted waist carved with pairs of confronting chilong divided by short bamboo-form struts, above a shaped apron carved in low relief with stylised dragons striding amidst scrolling foliage, supported on four cabriole legs with animal masks at the shoulders ending in claw-and-ball feet, the six square section posts joined with five openwork panels forming a latticework gallery, each panel comprising three horizontal sections, the two front centre sections decorated with a qilin in a landscape, the side and back centre of conforming design with a ferocious lion alternating with medallions enclosing a qilin and a tripod censer, all between the top section with circular chilong roundels and the lower frieze with curling chilong, the top rail reticulated with similar chilong, the posts joined at the top by a canopy of corresponding form

For further information on the condition of this lot please contact cherrei.tian@sothebys.com
This lot contains endangered species. Sotheby's recommends that buyers check with their own government regarding any importation requirements prior to placing a bid. For example, US regulations restrict or prohibit the import of certain items to protect wildlife conservation. Please note that Sotheby's will not assist buyers with the shipment of this lot to the US. A buyer's inability to export or import these lots cannot justify a delay in payment or sale cancellation.此編號含有瀕臨絕種物料。蘇富比建議買家在投標之前，先理解有關地方政府的入口限制。如美國為保護野生動物而對有關材質所實行的出入口規條及限制。蘇富比將不會協助此編號運往美國的運輸。買家無權因為未能得到出入口許可而取消拍賣及延遲付款。
Eastern Pacific Co. (Hei Hung-Lu), Hong Kong, 3rd September 1987.
Sumptuously carved in openwork with auspicious motifs such as qilin, lions and chilong, this magnificent canopy bed displays late Ming (1368-1644) aristocratic splendour. As one of the most important pieces of furniture in a household, six-post canopy beds were among the most luxurious and impressive types of bed that one could own. Typically dressed with quilts and curtains, a canopy bed would have been used not just for sleeping at night, but also as a means of escape from daily life during the day.

Beds of this type are essentially a room within a room as their design reflects aesthetic principles of Chinese classical architecture. Their six-post construction mimics three-bay buildings such as pavilions, where the roof is supported by posts and the lack of walls merges outdoor and inner space. The sophisticated openwork railings recall a building’s balustrade, which have the dual function of creating interest through their decoration and increasing stability. In addition, the upper panels under the canopy roof are carved to allow air circulation like the panels under the eaves of buildings.

The furniture connoisseur Wang Shixiang, in the catalogue Masterpieces from the Museum of Classical Chinese Furniture, Chicago & San Francisco, 1995, p. 22, identifies a group of canopy beds exquisitely carved with closely related designs and suggests they were all produced at the same workshop in northern China. On display at San Antonio Museum of Art, Texas, for example, is a canopy bed (accession no. 65.111.34) closely related to the present piece, illustrated in the exhibition catalogue Beyond the Screen: Chinese Furniture of the 16th and 17th Centuries, Museum of Fine Arts, Boston, 2000, p. 59, fig. 2, where the Boston museum suggests that two similar examples are in the Great Mosque in Xian and the Palace Museum in Beijing.