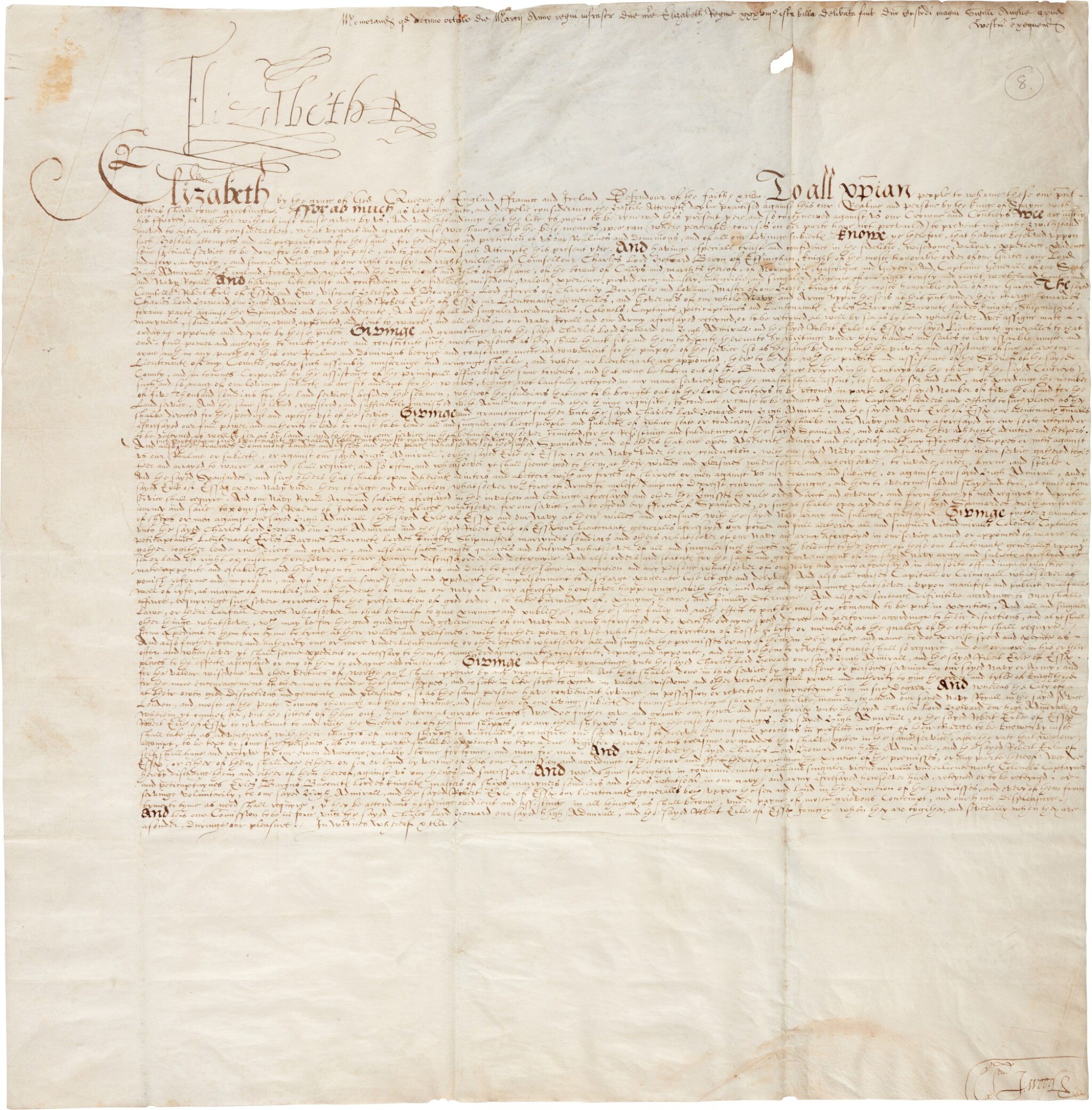 Document signed, at the head, authorising an attack on Spain,

ordering the issue of a letters patent which, in the light of "hostile attemptes daylie practised against this our Realme and persone by the kinge of Spayne", appoints Charles Lord Howard of Effingham as high admiral and Robert Earl of Essex as Lieutenant General jointly "Governors of out whole Navy and Army uppon the seas", authorising them to muster a fleet and army 'to invade, enter, burne, and spoile.... the sayed Spaniardes", with other rights include the authority to create knights, endorsed by Lord Burghley "This is to pass the Great seale immedyatly and this bill signed to remayn at the L. kep[er] without inrollyng of the same for some tyme", the endorsement signed by Burghley, Essex, and Robert Cecil, one large vellum membrane (525 x 539mm) contemporary note of ensealing at head, 18 March 1596, housed in a half red morocco folding box, small hole in blank area of upper margin

THE ROYAL ORDER THAT LED TO THE SACK OF CADIZ. Less than three months after the Queen issued this warrant, Lord Howard of Effingham and the Earl of Essex sailed from Plymouth with 150 ships. They reached Cadiz harbour on 30 June, quickly defeating the Spanish fleet. Essex led the assault on the city itself, landing in the first boat ashore and leading his troops over the city walls. Cadiz was soon conquered, plundered, and burnt, but the English did not have the capacity to leave a garrison. This was the most successive aggressive action by the English of the Anglo-Spanish war and was a humiliation for Philip II, but it brought no strategic advantage beyond sapping further the overstretched Spanish treasury. The English also find the time to raid Faro in Portugal on their return home, making off with 178 books from the Bishop's library that were subsequently donated to the Bodleian.

This document, in which the Queen orders her military commanders to take the war to the Spanish, and delegates to them a wide range of powers, is an exceptional example of the first Elizabeth as war leader. It marks a key moment not just in the war with Spain that defined the latter part of her reign, but also in her fascinating relationship with her volatile favourite, the Earl of Essex, that was to conclude five years later on the executioner's block.