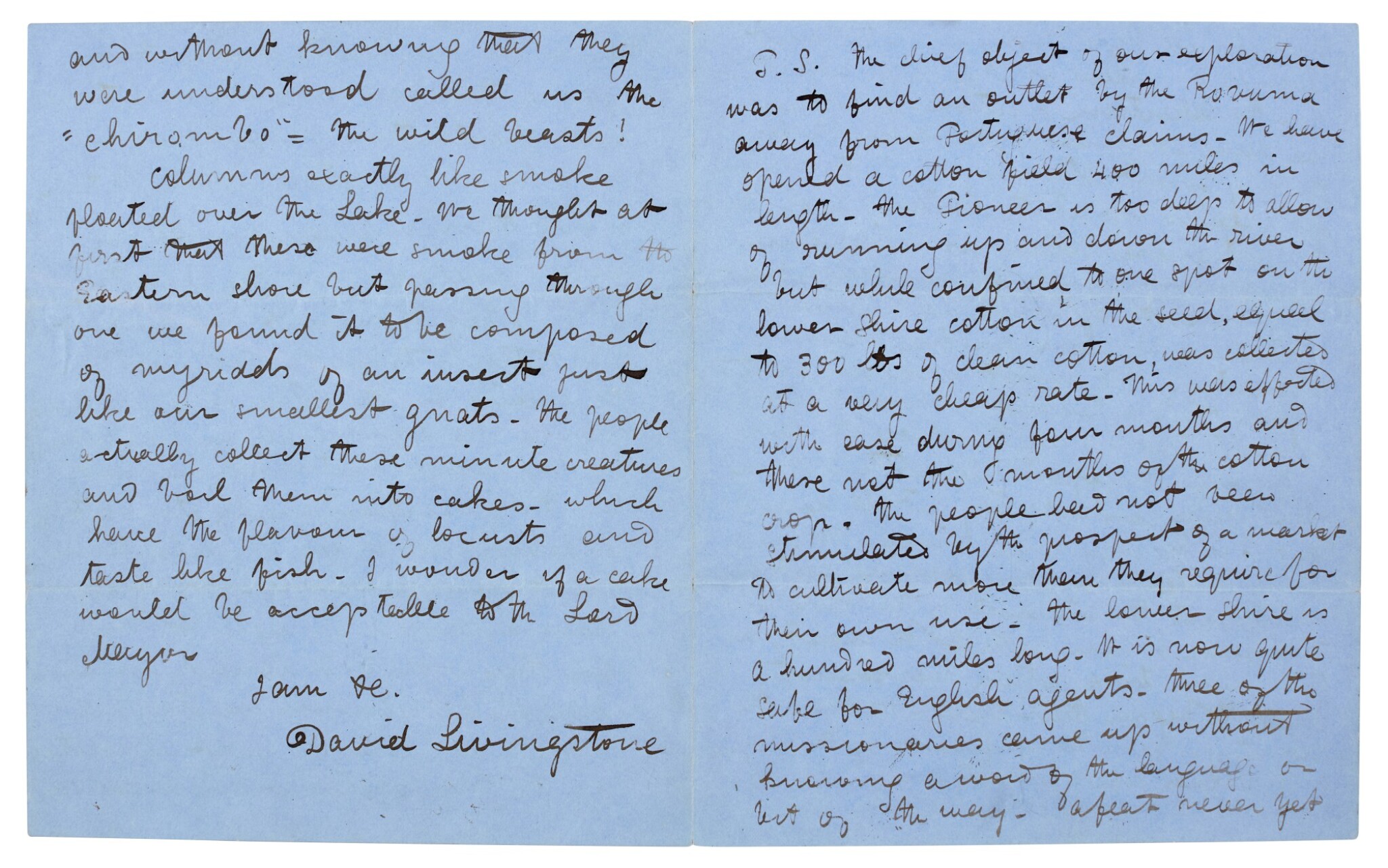 "...We have just returned from the exploration of Lake Nyasa in a boat which we carried past about 35 miles of the cataracts on this river. In that space we ascended about 1200 feet, and when we embarked on the upper [River] Shire we were virtually on the Lake for the next sixty miles has little current and is all smooth and deep. We found the southern end of Nyasa forked and resembling somewhat the boot shape of Italy...the length of the Lake is over 200 miles. It lies nearly North and South and gives access to a large section of slave producing territory..."

in this lengthy letter, Livingstone provides a detailed account of a three-month exploratory journey around Lake Nyasa (Lake Malawi), which he had discovered and named in 1859. He discusses the geography, both simply with a view to better understanding the landscape - such as whether the river Ruvuma opens into the lake - and also for potential commercial opportunities, such as the region's suitability for growing cotton. He also notes details of the wildlife, such as the fact that the elephants, which were not hunted for ivory, lacked their usual fear of humans ("...When we killed one for food the rest of the herd stood a mile off for two days. Elsewhere they would not have stood within 30 or 40 miles..."), and also comments on the traditions and habits of the local population:

"...Columns exactly like smoke floated over the Lake. We thought at first that these were smoke from the Eastern shore but passing through one we found it to be composed of myriads of an insect just like our smallest gnats - the people actually collect these minute creatures and boil them into cakes - which have the flavour of locusts and taste like fish..."

Livingstone's encounters with the local population were often fraught with tension. He describes an meeting with members of the the Ajawa tribe that ended in violence:

"...some foolish Manganja called out that one of their sorcerers had come and deprived us of the protection of our English name. We were at once surrounded - and showers of poisoned arrows shot at us. We were obliged to act in self defence and drive them off..."

A meeting with a group of Zulus narrowly avoided a similar outcome:

"...they were as much afraid of me as our men were of them - I went to them unarmed - and because I would not sit in the Sun while they sat in the shade they tried to scare me by rattling their shields, and that having no effect...they sped away up the hills as if they had seen a ghost..."

Livingstone well understood that these were not tribes living in isolation from the outside world. In particular, the slave trade had a major disfiguring effect on the region and he hoped for Palmerston's support in acting for its suppression. An Arab dhow had recently been built on the lake to supply the slave trade at the Portuguese slaving outlet of Iboe ('...I had a strong desire to capture this vessel...Had I possessed slave papers I might have tried as we could then have navigated the Lake with our whole party on board...'), and the Portuguese have followed the missionaries who were active in the area (and of whom, he makes clear, Livingstone had a fairly low opinion), and set up "an extensive system of slave hunting in the very country to which the bishop had come".

AN EXCEPTIONALLY DETAILED LETTER BY LIVINGSTONE ON HIS WORK IN EAST AFRICA.