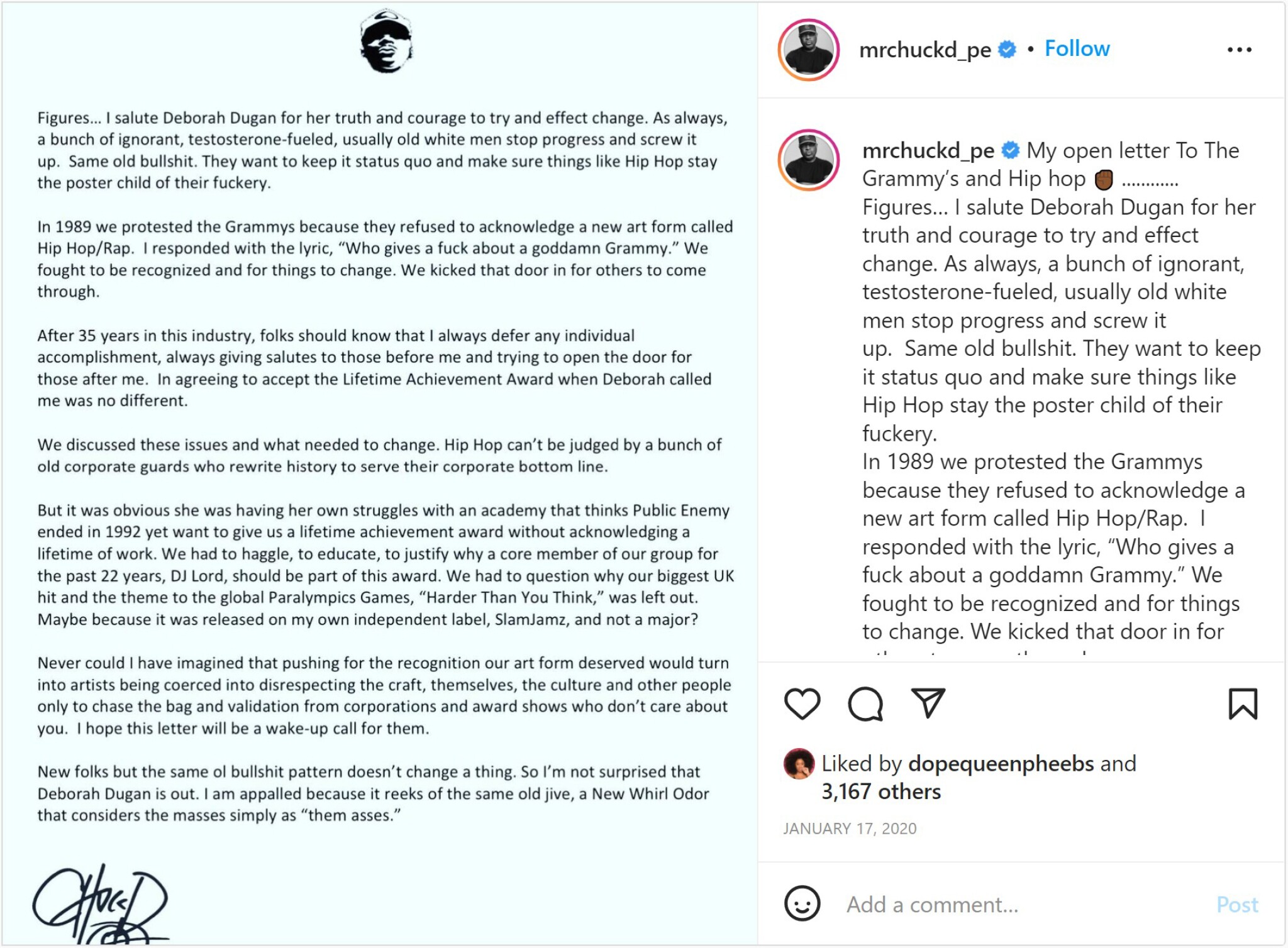 The above letter is offered together with an NFT which includes:

[AND]: "Open letter to the Grammys", original digitized file of the above physical letter, which was used to create the above mentioned Instagram post. (PDF)

Ten days before Public Enemy was set to receive their Lifetime Achievement Award at the Grammys, Deborah Dugan, the Recording Academy's CEO and the first woman to hold the post, was suddenly ousted after just five months on the job. In response, Chuck D, front-man for the legendary group sat down at his laptop and composed a powerfully worded letter. He printed and signed it, then digitized it and sent to his social medial team for dissemination, who chose to post it first on Chuck's Instagram account. The letter was then widely written about in the press and reproduced, including by Rolling Stone Magazine, Variety, and Billboard.

Figures… I salute Deborah Dugan for her truth and courage to try and effect change. As always, a bunch of ignorant, testosterone-fueled, usually old white men stop progress and screw it up. Same old bullshit. They want to keep it status quo and make sure things like Hip Hop stay the poster child of their fuckery.

In 1989 we protested the Grammys because they refused to acknowledge a new art form called Hip Hop/Rap. I responded with the lyric, “Who gives a fuck about a goddamn Grammy.” We fought to be recognized and for things to change. We kicked that door in for others to come through.

After 35 years in this industry, folks should know that I always defer any individual accomplishment, always giving salutes to those before me and trying to open the door for those after me. In agreeing to accept the Lifetime Achievement Award when Deborah called me was no different.

We discussed these issues and what needed to change. Hip Hop can’t be judged by a bunch of old corporate guards who rewrite history to serve their corporate bottom line.

But it was obvious she was having her own struggles with an academy that thinks Public Enemy ended in 1992 yet want to give us a lifetime achievement award without acknowledging a lifetime of work. We had to haggle, to educate, to justify why a core member of our group for the past 22 years, DJ Lord, should be part of this award. We had to question why our biggest UK hit and the theme to the global Paralympics Games, “Harder Than You Think,” was left out. Maybe because it was released on my own independent label, SlamJamz, and not a major?

Never could I have imagined that pushing for the recognition our art form deserved would turn into artists being coerced into disrespecting the craft, themselves, the culture and other people only to chase the bag and validation from corporations and award shows who don’t care about you. I hope this letter will be a wake-up call for them.

New folks but the same ol bullshit pattern doesn’t change a thing. So I’m not surprised that Deborah Dugan is out. I am appalled because it reeks of the same old jive, a New Whirl Odor that considers the masses simply as "them asses."

Chuck D (b. 1960) is one of the architects of Hip Hop; politicizing music to speak truth to power. His visual art is personal, it can be found in The Smithsonian and galleries worldwide. His most famous artwork is Public Enemy’s site logo. In 2016 he co-founded Prophets Of Rage alongside members of Rage Against The Machine and Cypress Hill. "Fight The Power" was voted the #2 most important song of all time by Rolling Stone Magazine. Chuck D was inducted into the Rock and Roll Hall Of Fame, in 2013.

To request a condition report for the physical component of this lot, please contact pop@sothebys.com