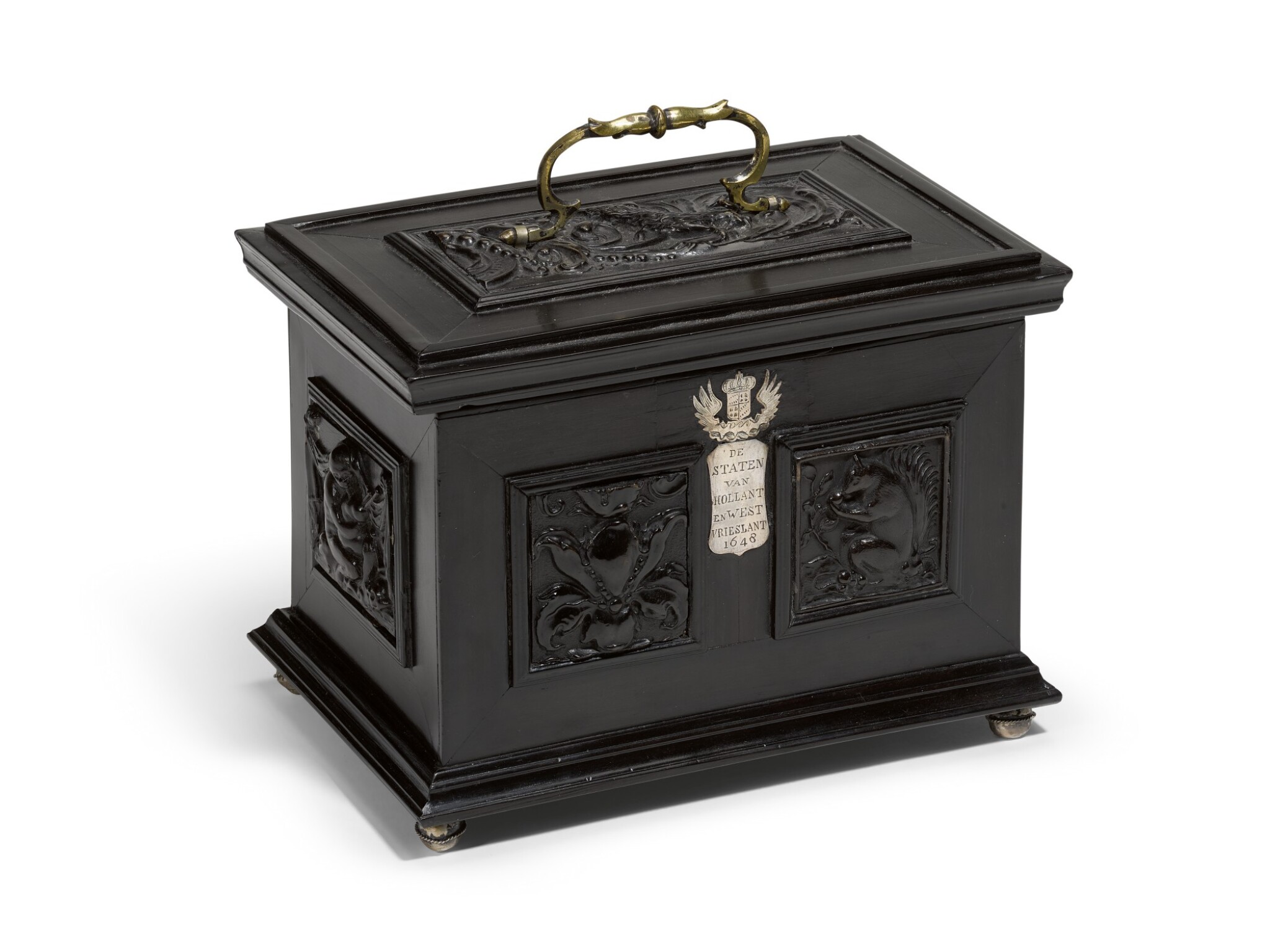 the panelled and moulded casket veneered on oak, the hinged lid with brass carrying handle and hinges, the front mounted with a later silver armorial mount with engraved text De Staten van Holland en West Vriesland 1648 between two raised decorative panels, the lid, sides and back each with one panel, all panels inset with ebonised pressed baleen plaques in ‘kwab’ style depicting a putto with dolphins, a flower or various animals within foliage, the right side with a sliding panel enclosing a small hidden drawer

The present lot is in very good restored condition and it is ready to be placed. The interior walls are protected with later balsa wood sheets lined with fabric, which are easily removable. It shows signs of a former lock (seen from the front and back). The back panels with some wear and several cracks. The later ball feet with marks and indentations, one with losses filled with resin.

This lot contains endangered species. Sotheby's recommends that buyers check with their own government regarding any importation requirements prior to placing a bid. For example, US regulations restrict or prohibit the import of certain items to protect wildlife conservation. Please note that Sotheby's will not assist buyers with the shipment of this lot to the US. A buyer's inability to export or import these lots cannot justify a delay in payment or sale cancellation.
Collection de Boer-Steunenberg, Netherlands
Breebaart, I., G. van Gerwen, Pressed baleen and fan-shaped ripple mouldings by Herman Doomer, in: Eleventh international Symposium on Wood and Furniture Conservation, Amsterdam 9-10 November 2012, p. 65, ill. 12.

This fascinating casket is a rare example of the use of pressed baleen work, a quintessential Dutch Golden Age technique. The Dutch develop a profitable fishing trade of Greenland right whale, used for its fat that could be turned into oil. Baleen are the fringed plates hanging in right whales' mouths used to strain seawater for food and the Dutch quickly realized this by-product could have a use.

The Englishman John Osborn, an ivory and horn worker active in Amsterdam, was the first to have a patent to prepare baleen in 1618 and, 23 years later, the celebrated cabinet-maker Herman Doomer and his son Matheus were also granted a pattern to press this material.

Baleen’s dark colour and polished sheen were a perfect match for ebony, which since the early 17th century was becoming widely available in Amsterdam through the expansion of the Dutch Indies Company (VOC) activities, resulting in luxury pieces of furniture and objects.

The present lot hence demonstrates this fine pairing with ebony veneers and mouldings framing six small sections of pressed baleen; with motif choice quite aleatory – squirrel, a putto with dolphins, a flower or various animals within foliage – which somehow reveal its scarcity and how prized these were.

Interestingly, a mirror frame attributed to Herman Doomer (c.1640-1655) in the Rijksmuseum collections (BK1978-188) has a pressed baleen inner border with some of the motifs seen in the present lot, copied from prints after kwab designs by Hans Janssen. Although it is likely that several copies were made from the same mould, it seems also that “it was very time-consuming to prepare the baleen and to produce the moulds. This may explain the limited amount of objects which are known to be made from pressed baleen (Breebaart and van Gerwen, p.72)