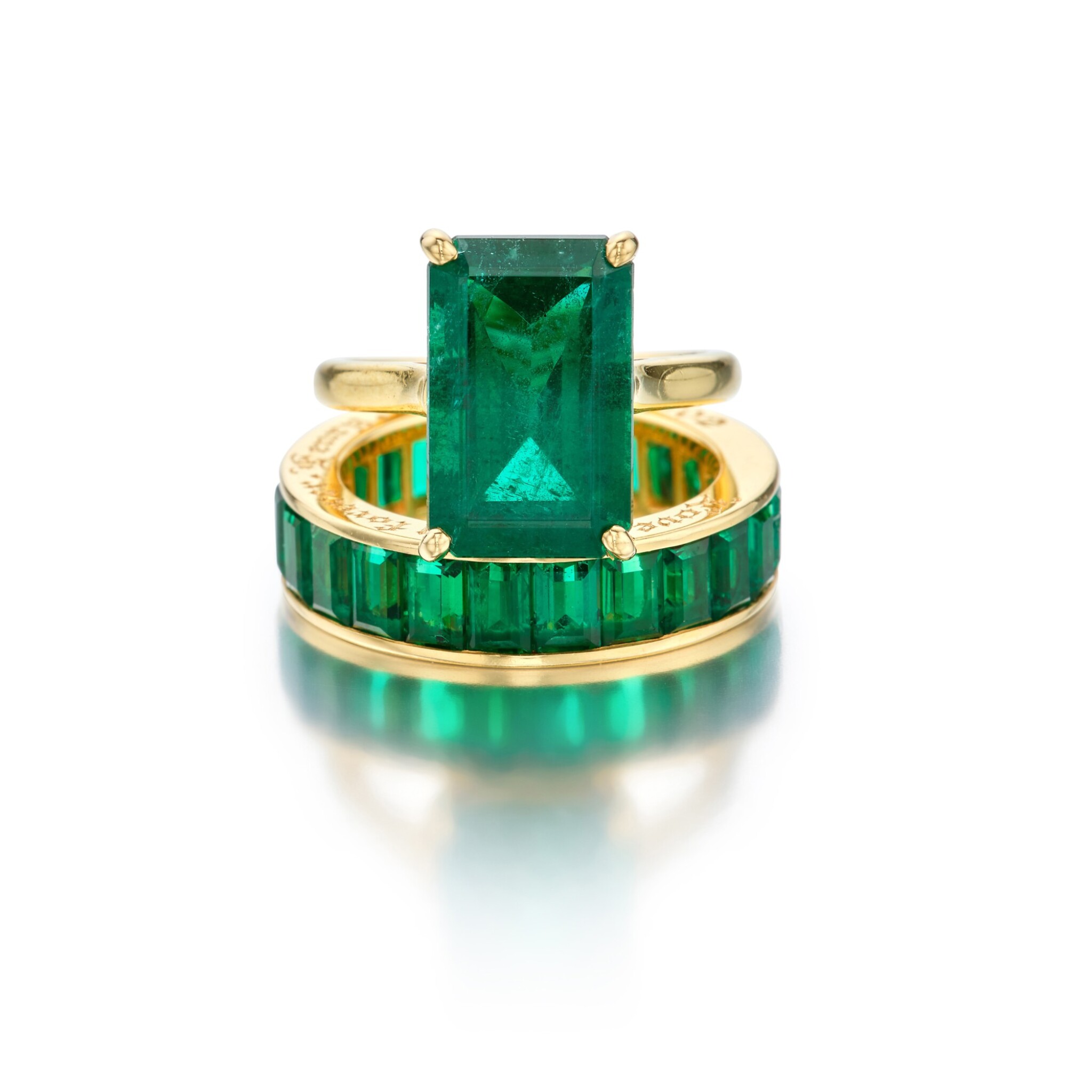 The ring centering an emerald-cut emerald and inscribed 'My Love Always 10-1-83,' with an eternity band set with 23 emerald baguettes and inscribed 'Dearest Fran, my emerald kiss of love for you is long and ever deepening, Love eternally forever, Henry, 3 March 2002.'

Each in good condition, the mountings with light scratches commensurate with wear, not noticeable when worn. The ring stamped 18K; the eternity band stamped 750 for 18 karat gold. The emerald-cut emerald is medium deep green, moderately included. The baguette emeralds are medium deep green to slightly bluish green, slightly included, a few with small chips and one with a crack bisecting the stone. Accompanied by AGL report no. 1120597 dated January 28, 2022 stating that the emerald-cut emerald is of Zambian origin, clarity enhancement: insignificant, type: traditional.

The William King Museum of Art is a visual arts and cultural heritage museum with a mission to promote arts education and preserve the cultural heritage of Southwest Virginia and Northeast Tennessee. Through programs and exhibitions of fine art, they aim to promote an accurate representation of the region’s important place in the history of American decorative arts and material culture. Since first opening in 1992, the museum has continued to serve as an institution of scholarship and education for visitors and students who walk through its galleries. The museum has taken a leading role in promoting arts education for childhood development and adult enrichment. In the absence of robust programming in rural Virginia, the William King Museum plays a crucial role in exposing its community to the arts.

In 2017, “Dressed by Design” was exhibited at the museum as a tribute to the late Fran Keuling-Stout of Big Stone Gap, Virginia. Her collection of haute couture comprised designs from the likes of Giorgio Armani, Alexander McQueen, Ralph Lauren, and many more. Her wardrobe was a representation of her. It was her own form of design, fusing fashion and style into individual art form.

Born in the Bronx, New York, education was always an important part of Fran’s life. After receiving a bachelor’s degree from St. John’s University and two master’s degrees from New York University, she went on to teach English at the University of North Carolina, Charlotte. Fran and her husband Henry, were longtime patrons of the museum, supporting and appreciation their educational efforts. After Fran’s passing, her husband, Henry, donated her jewelry to the museum to help raise funds for their children’s art education fund. It is Sotheby’s pleasure to be able to help honor Fran’s legacy while helping the William King Museum to further its important educational goals.