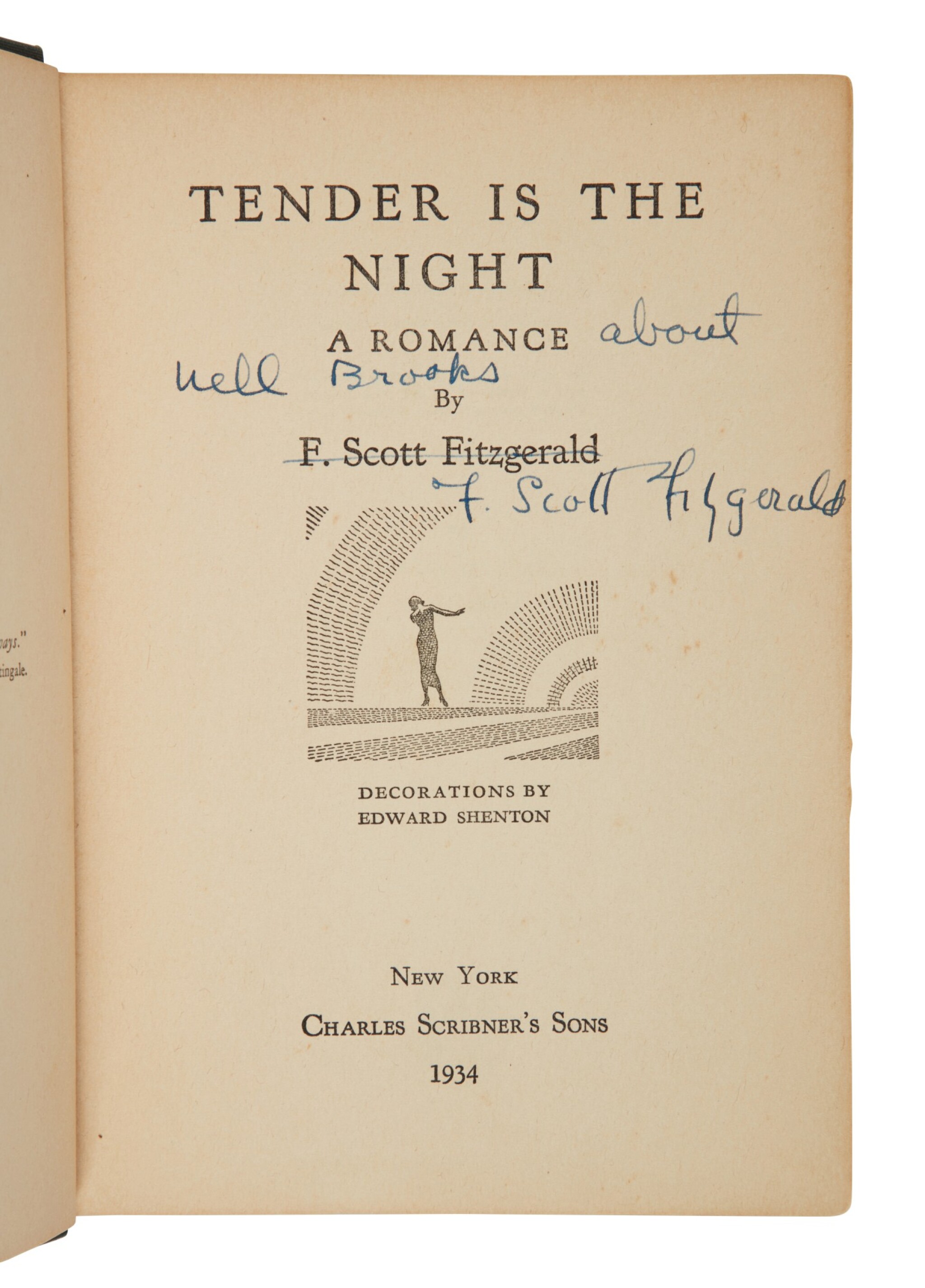 First edition, presentation copy, and a former mystery. The volume is inscribed twice to Nell Brooks: first with an inscription across the flyleaf and initial blank, and again on the title-page, where after the printed "A Romance" Fitzgerald has written "about Nell Brooks," and crossed out his printed name to add his signature. The long, exuberant inscription from Fitzgerald, pretending to be with Greta Garbo and Marlene Dietrich, reads, "For Nell: As we lie [struck through] sit here on the old bed [struck through] swing we often think of you. Miss Garbo realizes that you have had no past & feels no real jealousy when I speak of our 'platonic' friendship (you remember our encounter in the family waste basket?) But all is over between us Nell [struck through] Mary [struck through] Nell, and Gretta [sic] feels the same way I do—we wish you the best of happiness (and Marlene joins us), even if you weren't able to make F. Scott Fitzgerald"

For decades, the identity of Nell Brooks was undetermined—when this copy previously appeared at auction, including here at Sotheby's in 2012, she was unidentified and an intriguing mystery, given the inscription. But examination of Fitzgerald's ledgers reveals her name twice: in the April 1932 entry ("Zelda strange, ... Began househunting, Nell Brooks, the Va lady agent Mrs. Clark Freeman & Stuty ...") and in the October 1934 entry ("Elizebeth at Nell Brookes, the Nashes, Sally Reggs, O’Hara, Gingrich, Mrs. Owens ill. Alice Wooten. Bought the Ford").

The "Elizebeth" appearing in the second entry is Elizabeth Lemmon—a friend of Fitzgerald's, whom he met through his editor Max Perkins. Perkins and Lemmon met in 1926; he was immediately taken with her, and the two maintained an intensive correspondence until his death. Lemmon lived in Middleburg, Virginia, and Fitzgerald and Perkins visited her a number of times while Fitzgerald was living in Baltimore. Nell Brooks was, in fact, a friend of Lemmon's and appears multiple times in her letters to Perkins. Most significantly, Lemmon mentions in a 1944 letter that Brooks sold real estate in Baltimore (Tarr 236). This helps to make sense of the April 1932 entry, in which Fitzgerald writes that he's house-hunting with Nell Brooks. It could be the case that Brooks, in fact, helped him find La Paix—the Baltimore house that the Fitzgeralds rented from 1932-1933, during one of the most difficult periods of their lives, and where he completed Tender is the Night. In a letter to Perkins dated 8 November 1934, Fitzgerald writes, "It was rather melancholy to think of 'Welbourne' being closed for the winter but the last time I saw Elizabeth she seemed quite reconciled at visiting here and there, though the prospect would drive me nuts" (Turnbull 255). The "Welbourne" mentioned here is Lemmon's estate, and that Fitzgerald states he's seen her elsewhere corroborates the October 1934 ledger entry, in which he writes that he's seen her at Nell Brooks.

In 1966, the present copy was offered in the House of El Dieff's catalogue 66 as item 288, and was purchased by Fitzgerald's daughter Scottie. With the inscription alone, one could hardly hope to find a better example of a spirited Fitzgerald presentation on one of his key titles—but the provenance and history make this an even more remarkable copy. Given the state of Fitzgerald's life at this time—his alcoholism, his failures in Hollywood, and the state of his and Zelda's relationship—the lighthearted inscription is a surprising and rare flourish.

A singular copy of one of Fitzgerald's greatest achievements