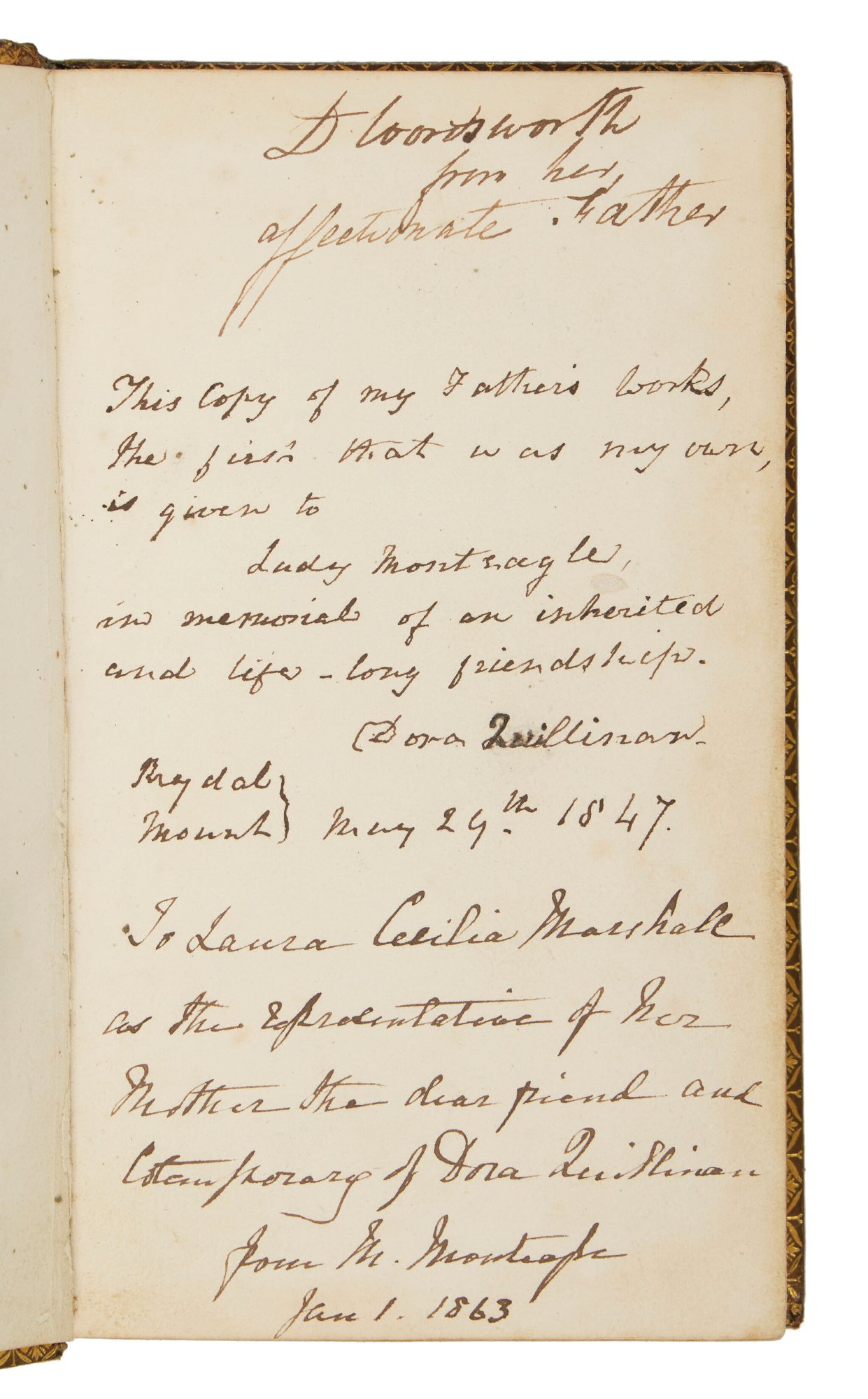 4 vols, 12mo (164 x 94 mm). Inscribed by Wordsworth on the flyleaf of each volume, additional inscriptions by both Dora Quillinan (née Wordsworth) and Lady Monteagle on the flyleaf of the first volume, textual emendations in Wordsworth's hand, a manuscript poem of Robert Southey's in pencil on the recto of the rear free endpaper in the third volume (presumably in Southey's hand), title-pages, half-titles in volumes two and three, engraved frontispieces by J.C. Bromley and S.W. Reynolds after Sir George Beaumont in each volume (one of which folding), 2pp. publisher's advertisements at end of first volume, 1pp. printed errata at end of the fourth volume; first few leaves of each volume (including the title-pages and frontispieces) foxed, otherwise only with stray spots throughout. In contemporary green straight-grained morocco, spine with gilt-decorated raised bands in five compartments, second and fourth compartments with red morocco labels lettered in gilt, others with repeat gilt motif, boards with gilt and blind rules and tooled blind, inside dentelles gilt, marbled edges, marbled endpapers; front hinge of volume one loose with the board just beginning to separate, some rubbing at extremities, stray stains and scratches to boards. Housed in a custom leather pull-off case.

Presentation copy of Wordsworth's works, inscribed to his daughter Dora from "her affectionate father," and later presented by her to Lady Monteagle

A truly remarkable association copy of the first collected edition of the entirety of William Wordsworth's works, this set features inscriptions to his daughter on the flyleaf of each volume. Dora was profoundly important to William—he named her after his sister Dorothy, with whom he maintained an intense and intimate relationship his entire life, and her infancy inspired the poem "Address to My Infant Daughter, Dora. On Being Reminded That She Was a Month Old That Day, September 16." He again wrote of her in her adulthood, along with Edith Southey (daughter of Robert Southey) and Sara Coleridge (daughter of Samuel Taylor Coleridge), in his poem "The Triad." He worked on the lines addressed to Dora with great care and intense focus, revising them numerous times, and indeed sent her at least two versions of the poem prior to its publication. The final version casts her as an idealized, dynamic force—carried by grace even if manners or judgment fail her:

... Insight as keen as frosty star

Is to her charity no bar,

Nor interrupts her frolic graces

When she is, far from these wild places,

O the charm that manners draw,

Nature, from thy genuine law!

In the slight of self—secure,

If, from what her hand would do,

Or tongue utter, there ensue

Hers is not a cheek shame-stricken,

But her blushes are joy-flushes—

And the fault (if fault it be)

Only ministers to quicken

Leaving this daughter of the mountains free,

As if she knew that Oberon the fairy

Had cross'd her purpose with some quaint vagary,

And heard his viewless bands

Over their mirthful clapping hands!

Dora and William were exceptionally close and admired each other deeply—in an 1830 letter Coleridge's son Hartley said that she "almost adored" her father. Dora herself had both literary ambitions and talent, publishing a travel journal in her lifetime (indeed, Sara Coleridge felt that Dora's father in fact stifled her talents). Given their affinities and their relationship, the present set is a truly magnificent presentation copy—being inscribed by a poet for whom association copies are already rare under any circumstances.

In addition to this compelling familial connection, the first volume contains significant textual emendations in William Wordsworth's hand. While most are minor typographical printing errors, corresponding to the printed errata leaf at the end of the fourth volume, there are three alterations of particular note, none of which appear on the errata page. On page 199, Wordsworth has provided an alternate line for the final lines of the third stanza of "Ruth": For "She passed her time; and in this way" he has provided in pencil, "And passing thus the livelong day" and has removed the word "up" from "She grew up to Woman's height." On page 216, in the fourth line of that page of "Laodamia," he has exchanged "for beauty's bloom?" with "for vernal bloom?" Further on in "Laodamia," on page 219, in the ninth line, Wordsworth has replaced "this" for "that." In the following line, he offers an entirely new beginning, which was not used in later printings of the poem: "For this passion to excess was driven—" is changed to "The sacred passion to excess was driven—". He has additionally added an accent mark over the penultimate letter of the title, "Laodamia," a change later accepted by the printers. The second volume also features several small editorial changes, some of which were accepted by the printers for the 1827 edition.

Just one month before her death from tuberculosis, Dora bequeathed this set to Lady Monteagle. The flyleaf of the first volume features a signed presentation inscription from Dora, dated 29 May 1847, reading, "This copy of my Father's Works, the first that was my own, is given to Lady Monteagle, in memorial of an inherited and life-long friendship." Directly beneath this is is an inscription from Lady Monteagle herself, on presenting the volume, "To Laura Cecilia Marshall as the representative of her Mother the dear friend and Contemporary of Dora Quillinan from M. Monteagle. Jan. 1, 1863."

Further, on the final page of the third volume appears a manuscript of Robert Southey's "Imitation from the Persian" in pencil. It reads:

Imitated from the Persian.

Lord, who art merciful as well as just,

Incline thine ear to me, a child of dust!

Not what I would, O Lord, I offer thee,

Alas! but what I can.

Father Almighty, who hast made me now,

And bade me look to heaven, for Thou art there,

Four things, which are not in thy Treasury,

I lay before thee, Lord! With this petition,

My Nothingness, my wants

My sins, and my contrition.

Given the signed initials and comparisons with his handwriting, this manuscript is, in all likelihood, in Southey's hand. Though, intriguingly, the date of composition present here is in fact two years earlier than the year ascribed to it by the poet in the printed edition of his works. Southey, one of the Lake Poets and a close friend of Wordsworth's throughout their lives, denotes the place of composition in the printed edition as Lowther Castle—the place where he and Wordsworth, as well as their families and friends, were frequently entertained by Lord and Lady Lonsdale. The date of the present manuscript, as well as the slight difference between the title of the poem here and its final version, may suggest that this was, in fact, the site of the poem's composition; arguably it may be a fair copy, having been transcribed later and dated incorrectly, though this would be a peculiar gesture for Southey to make.

The profound love and admiration that Wordsworth felt for his daughter is made tangible in this gift of his life's work to her. That presentation already exceptional in its own right, the other associations constellated around this set and the corrections in Wordsworth's own hand elevate these volumes far above a standard presentation set. Having not appeared at auction since 1909, these volumes are a singular and deeply moving collection of the works of one of the greatest poets of the English language.