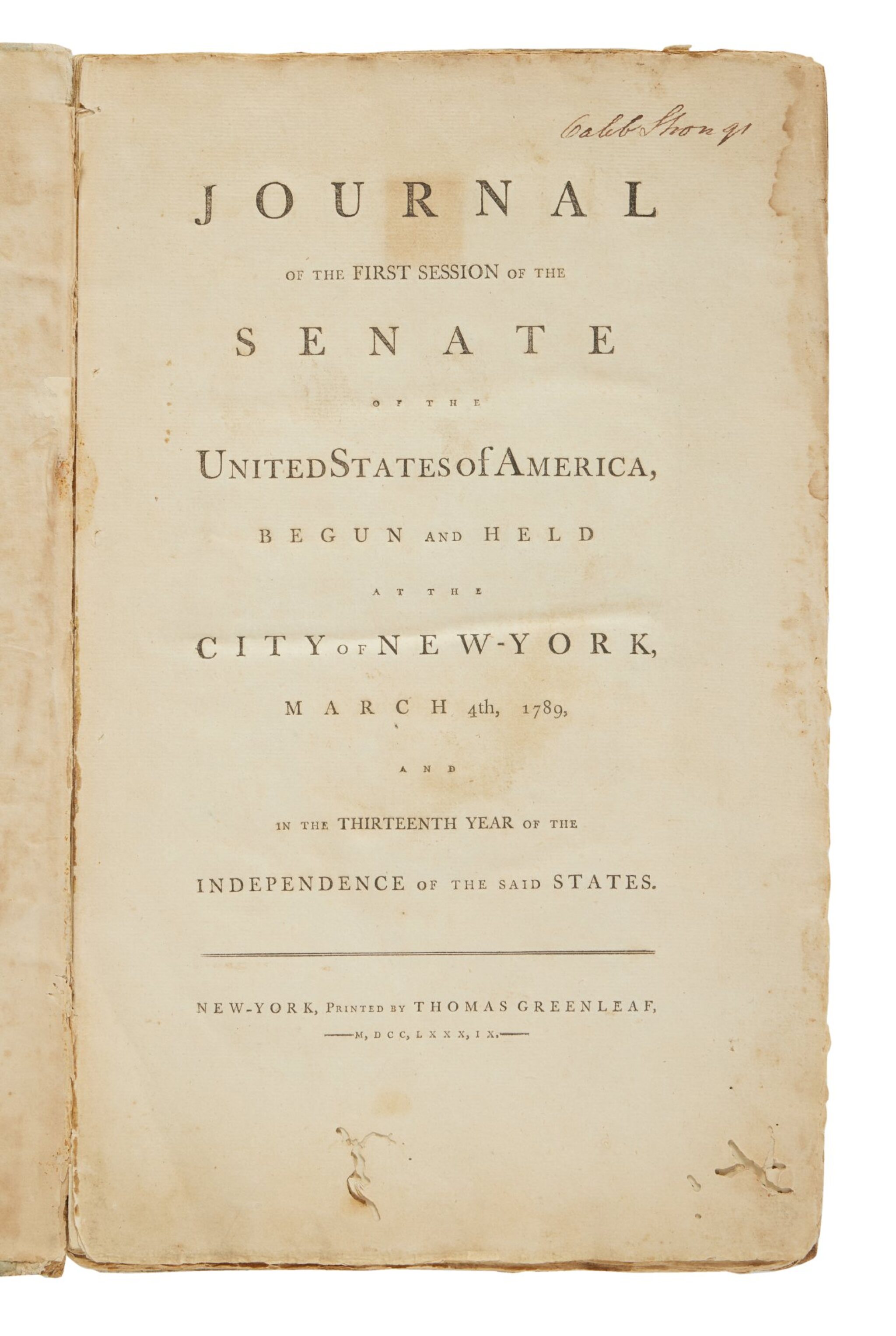 Journal of the First Session of the Senate of the United States of America, Begun and Held at the City of New-York, March 4th, 1789. New York: Thomas Greenleaf, 1789

Folio (342 x 215, uncut). Two or three wormholes at lower margin, becoming short trails in first few pages, but due to the large size of the present copy, none even close to the text, occasional light browning, scattered spotting, light dampstain to fore-edge of first three leaves. Original blue boards, front board signed by Caleb Strong and titled in his hand "Journal of the Senate | of the U.S. | at its first session | March 1789"; spine perished, front board stained, a bit shaken. Blue morocco folding-case gilt.

A number of important activities took place during this period including the tally of electoral votes in the first presidential election, President Washington's opening address to the new Senate and foremost among these, a discussion of the proposed Bill of Rights. On pages 103–106 appear the seventeen amendments introduced in the House by James Madison which were revised and consolidated by the Senate. The twelve amendments passed by Congress appear under the heading "Proposed Amendments" on pages 163–164, and were sent to the states for ratification. The first two were not ratified but the remaining ten became the first ten amendments to the Constitution—the Bill of Rights. (Incredibly, the originally proposed second amendment, which stipulated that any salary increases for Congress take effect only after an intervening election, was finally ratified in 1992 as the twenty-seventh amendment.)

The Bill of Rights appears in two 1789 printings, the present version and in the Acts Passed at a Congress of the United States (New York, Childs and Swaine). Both must have been printed at the close of business on 29 September and certainly before the end of the year. The Doheny-Manney copy of the Acts was inscribed to John Jay on 9 December 1789, suggesting that the Acts were not delivered by the printer until December. It seems likely that the Journal, issued by the first printer to the U.S. Senate, would have been printed before that, although no absolute priority of printing can presently be established (see James B. Childs, "The Story of the United States Senate Documents, 1st Congress, 1st Session, New York, 1789" in The Papers of the Bibliographical Society of America, Vol. 56, No. 2 [Second Quarter, 1962], pp. 175–194).

An important figure in the political history of Massachusetts, Caleb Strong (1745–1819) was a delegate to the Constitutional Convention, a leading Federalist in the debates over ratification, and one of his state's first two senators. He was, along with William Paterson of New Jersey and Oliver Ellsworth of Connecticut, one of the three senators responsible for the drafting of the bill that became the Judiciary Act. Introduced into legislation on 7 April 1789 and signed into law on 24 September 1789, this act established the Federal court system.

Despite the condition issues noted, a near-fine copy with distinguished provenance.