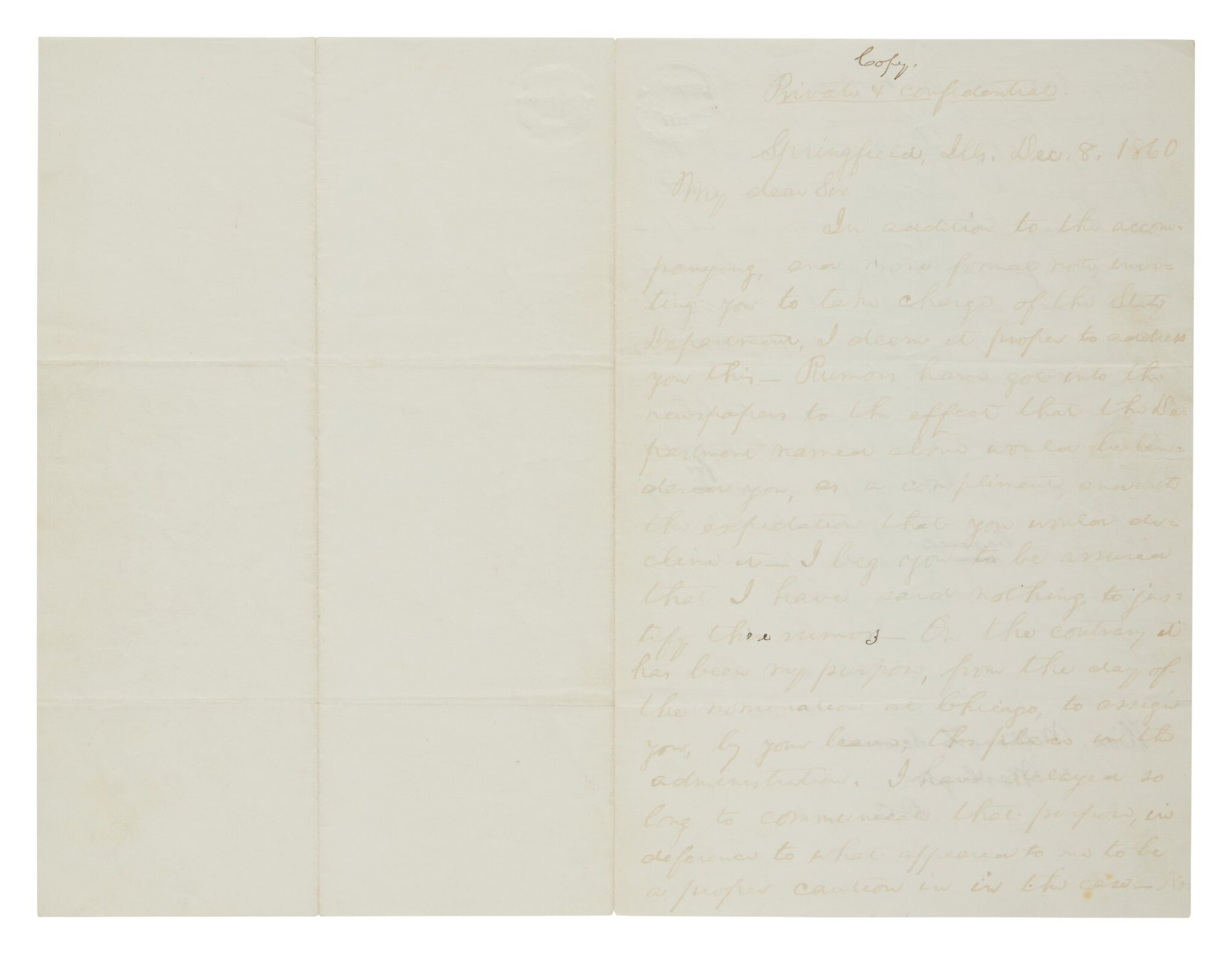 Autograph letter signed (“A. Lincoln”) as president-elect to William Seward, beseeching him to accept the appointment as Secretary of State

President-elect Lincoln proffers the office of Secretary of State to the principal of his team of rivals, asking for Seward’s “co-operation in keeping the maxim good.”

William Seward, Whig and then Republican Senator from New York, former governor of that state, and ardent antislavery proponent was the leading candidate to be the Republican candidate for president in 1860. When the Chicago Convention instead nominated Abraham Lincoln, Seward was disappointed, but nonetheless campaigned vigorously for the Lincoln-Hannibal Hamlin ticket.

Still, there was speculation that doubted whether Seward would want to join the Lincoln cabinet—and whether Lincoln really wanted him. This letter belies any hesitation on Lincoln’s part.

This letter was given to the custody of Hannibal Hamlin, who, as a Senator from Maine, was, like Seward, already in Washington. Lincoln actually sent two sets of two letters to Hamlin: a sealed formal notification of his intention to nominate Seward as Secretary of States and the sealed original of the present, more personal missive. Open copies of both letters were included so that Hamlin, who was to deliver the sealed communications to Seward, would know their content. Lincoln’s cover letter to Hamlin explains: “The inclosed to Governor Seward covers two notes to him, copies of which you find open for your inspection. Consult with Judge Trumbull; and if you and he so reason to the contrary, deliver the letter to Governor Seward at once” (Collected Works 4:147).

Seeing no reason to the contrary, Hamlin duly met with Seward on 10 December. Seward read the formal note first and received it somewhat coldly: “With your permission, I shall, at the proper time, nominate you to the Senate, for confirmation, as Secretary of State, for the United States. Please let me hear from you at your earliest convenience” (Collected Works 4:148).

The personal letter, however, moved Seward deeply and Hamlin later recalled that his face became “pale with excitement” (Life and Times of Hannibal Hamlin, quoted by Goodwin). The second letter is a brilliantly persuasive example of Lincoln’s ability to build coalitions:

“In addition to the accompanying, and more formal note, inviting you to take charge of the State Department, I deem it proper to address you this. Rumors have got into the newspapers to the effect that the Department named above would be tendered you, as a compliment, and with the expectation that you would decline it. I beg you to be assured that I have said nothing to justify these rumors. On the contrary, it has been my purpose, from the day of the nomination at Chicago, to assign you, by your leave, this place in the administration. I have delayed so long to communicate that purpose, in deference to what appeared to me to be a proper caution in in the case. Nothing has been developed to change my view in the premises; and I now offer you the <appointment> place in the hope that you will accept it, and with the belief that your position in the public eye, your integrity, ability, learning and great experience, all combine to render it an appointment pre-eminently fit to be made.

“One word more. In regard to the patronage, sought with so much eagerness and jealousy, I have prescribed <to> for myself the maxim, “Justice to all”; and I earnestly <beg> beseech your co-operation in keeping the maxim good.”

After consulting with his political mentor, Thurlow Weed (whose patronage may have impended Seward’s path to the presidential nomination), Seward accepted Lincoln’s offer, providing advice and stability to the president-elect during the secession winter and, after the inauguration truly becoming, the words of one of his biographer’s “Lincoln’s Right Hand.”