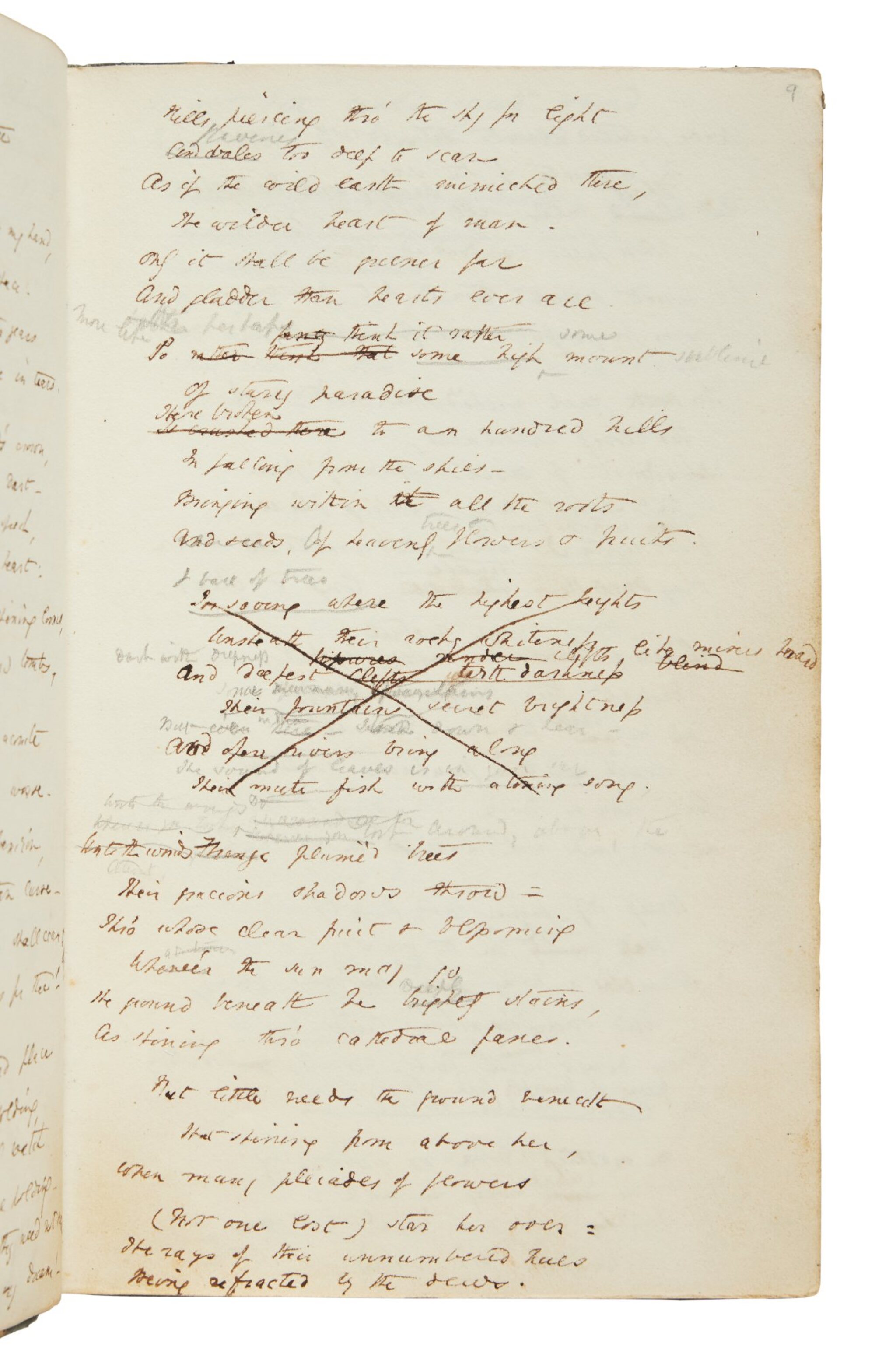 Extensive autograph manuscript, variously initialed by Browning (then Elizabeth Barrett Moulton-Barrett) on numerous pages, being the working notebook for the verses later published in The Seraphim, and Other Poems, n.p., circa 1835-1837

Elizabeth Barrett Browning's heavily revised autograph working notebook for The Seraphim, and Other Poems (1838) — the first book to bear her name.

Extraordinarily, these pages contain drafts of all the major poems in The Seraphim, which was published by Saunders and Otley in 1838. Together "The Seraphim," "The Poet's Vow," "The Romaunt of Margret," "Isobel's Child," and "A Romance of the Ganges"—along with numerous other verses—helped establish Elizabeth Barrett Browning as one of the most important poets of the Nineteenth Century. Nearly all of the of the poems in the present notebook have been extensively revised, with lines and entire stanzas deleted and reworked, preserving scores of unpublished and unexamined lines, offering scope for new readings through the lens of early and amended material.

"Poetry is essentially truthfulness" (Barrett Browning, in the Preface of the published edition of The Seraphim). — A remarkable glimpse into Barrett Browning's genius and working method.

The Seraphim was the first work that Elizabeth Barrett issued under her name (with the exception of Battle of Marathon, a juvenile work printed in 1820). Seraphim was extensively and well-reviewed in the principal literary journals of the period, and within two or three months, its author went from being virtually unknown, to one of the most promising English poets of her generation. "Poetry is essentially truthfulness," she declares in the Preface of the first published edition; "and the very incoherences of poetic dreaming are but the struggle and the strife to reach the True in the Unknown." In writing to John Kenyon, a wealthy family friend and patron of the arts, she declared: "with all its feebleness and shortcomings and obscurities," The Seraphim was "the first utterances of my individuality." Furthermore, she had "found it hard work to get into expression," in part because her tongue "clove" to the roof of her mouth when she composed the poems in the present notebook. In the 1838 Preface she also wrote "I would fain hope to write hereafter better verses; but I can never feel more intensely that at this moment—nor can it be needful that any should—the sublime uses of poetry, and the solemn responsibilities of the poet."

Elizabeth Barrett Browning began writing verse at the age of four, and "the solemn responsibilities of the poet," along with an understanding of the "sublime uses" of her craft, formed an essential part of her identity from her earliest years. She was educated at home with her oldest brother, and while the Moulton-Barretts were settled at Hope End—their estate near the Malvern Hills in Ledbury, Herefordshire—Elizabeth was known as a studious and precocious child. By the age of six she was reading novels, and by eight professed to be taken with Alexander Pope's translations of Homer. She began studying Greek at ten, and at eleven penned The Battle of Marathon, her very own Homeric epic. By 15, she had read Mary Wollstonecraft's A Vindication of the Rights of Woman, and became a passionate supporter of the ideas outlined therein. Indeed, Elizabeth's intellectual appetite could not be satiated. She remained fascinated by classical literature and metaphysics, both of which were later incorporated into a sort of religious intensity, and subsequently conveyed through her verse. The titular poem in this collection, for example, takes the form of a dialogue between two angels at Christ's Crucifixion. The concept came to the poet as she was translating Aeschylus' Prometheus Bound, and can in some respects be read as the anti-Prometheus in its move away from the mythological toward the spiritual.

This working notebook—a rare and extraordinary survival—is evidence of Barrett Browning's diligence, with the numerous revisions demonstrating the intensity of her process. It contains all of the poems in the published edition of The Seraphim, as well as eleven others that remain unpublished. This significant collection of drafts, along with the extensive additions, deletions, and emendations, forms the first significant collection of the poet's own work. As Barrett Browning sought and discovered the incipient strength of her developing voice through these pages, this volume represents an invaluable resource for scholars, and is an essential link in the extant collections of the poets notebooks.

One of the most significant and visually engaging poetic manuscripts to appear at auction.