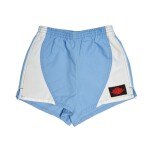 The shorts are in new condition.

Reminiscent of the color scheme of Jordan’s alma mater, the University of North Carolina, these original Air Jordan brand shorts, feature a predominantly Carolina Blue base, with accents of white. An original Air Jordan ‘Wings Logo’ patch is located near the bottom of the left leg. The interior size tag on the waist is Nike branded.