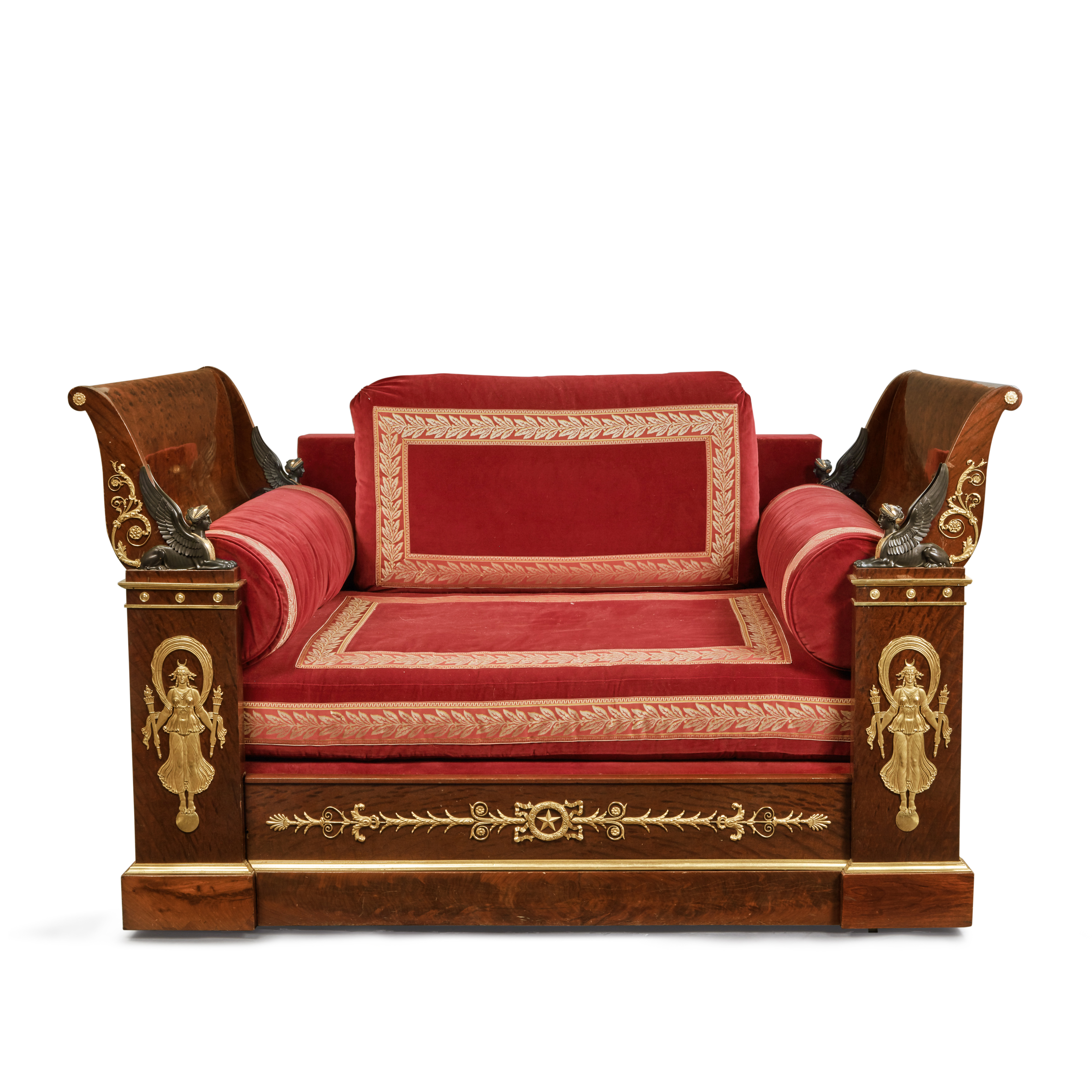 Each pedestal end exterior with sun bleached patina, left side with lifting veneer and minor cracks and scratches consistent with age and use. Left end right pedestal end with a few nails holes above the bronze sphinxes and some miniscule scratches. One of the steel bolds joining the rail to the pedestal has broken off and a section of it remains in the pedestal. Overall in good condition. Attractive lot.

The lit en bateau, also called a lit à dossiers à crosse, was a new model that appeared during the Directoire period in the late 1790s, and the offered lot is based on one of its earliest and most celebrated incarnations, the bed made for the prominent salon hostess and socialite Juliette Récamier (1777-1849) in circa 1799 (Louvre, Paris), attributed to Jacob Frères after a design traditionally attributed to the architect Louis-Martin Berthault but possibly by Charles Pericer, by whom a drawing of the bed survives in an album now in the Metropolitan Museum, New York (illustrated in Jean-Pierre Samoyault, Mobilier Français, Consulat et Empire, Paris 2009, p.46 fig.55). Madame Récamier's bed quickly gained notoriety through its publication in the 1801 volume Plans, coupes, élévations des plus belles maisons et des hôtels construits à Paris et dans les environs by J-C Krafft and N. Ransonnette, plates 90 and 92.

The Récamier bed differs in its front profile with a boat-shaped board joining the two pedestal supports rather than a straight rail, and the presence of swans rather than sphinxes at the lower edge of the curved sides. The bronze mounts, however, are virtually identical, with a very similar frieze across the lower edge flanked by the same figures of Selene, the Greek goddess of the Moon, recognisable by her flaming torches and crescent headdress, and highly appropriate iconographically for a bedroom.

A virtually identical bed to the present lot, attributed to Jacob Frères and with the same mounts but the sphinxes in carved mahogany rather than gilt and patinated bronze, is in the Musée des Art Décoratifs, Paris (inv. 8584), illustrated in C. Bizot, Mobilier Directoire Empire Paris 1976, p.48.