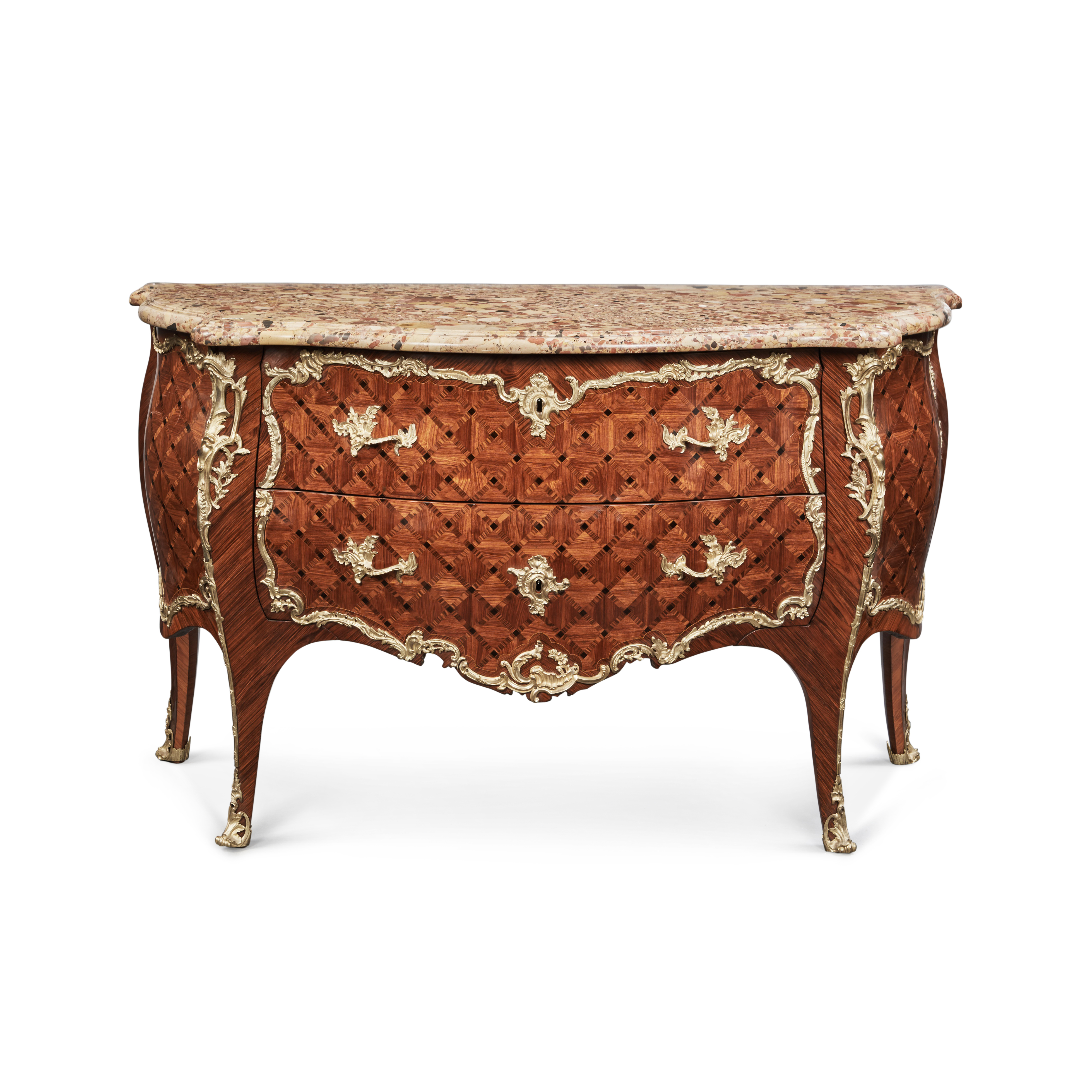 Overall in good preserved condition. Base with some minor evidence of old woodworm activity which no longer appears to be active. Some miniscule lifting of veneer at right side of the commode. Right leg with miniscule dent.

Delivered in 1765 by Gilles Joubert to Pierre-Elisabeth de Fontanieu, Intendant du Garde Meuble Royal, en suite with a secretaire (2379) and a pair of corner cupboards (2380)

Later sent to Versailles, where it was recorded in 1792

Although stamped by Coulon, this commode was actually delivered in December 1765 by the ébéniste de la Couronne, Gilles Joubert, for Pierre-Elisabeth de Fontanieu who had succeeded in 1767 his father (and his grandfather) as intendant et contrôleur général des Meubles de la Couronne, a post which he carried out until 1783. It was delivered, along with two other pieces which follow the numbering of the commode, a secretaire and a pair of encoignures (nos 2379 & 2380), for the personal apartment of Fontanieu in the hôtel du Garde-Meuble Royal in Paris. Although the page corresponding to its delivery in the Journal du Garde-Meuble de la Couronne is missing, it is mentioned briefly in a summary of the Journal du Garde-Meuble. Moreover, it is described in detail in a general inventory of furniture and bronzes of the palace of Versailles, in 1790, that description repeating word by word (as it always did) the former entry in the Journal du Garde-Meuble Royal:

The subcontracting practices of the ébénistes de la Couronne are well established and Joubert was no exception. He repeatedly used the work of his fellow ébénistes, such as RVLC, Boudin, Dubois, Criard, Deloose, Macret, Bayer, Cramer and Péridiez. With Coulon, such subcontracting practices would be even more likely, since he was very close to Joubert. When the latter's wife, Michèle Collet, died in 1771, Coulon was entrusted, along with Denizot, with the inventory of the estate and when Joubert himself died in 1775, Coulon was named his executor (exécuteur testamentaire).

The current design of the marquetry is probably imitating the original mosaique design of inlay.